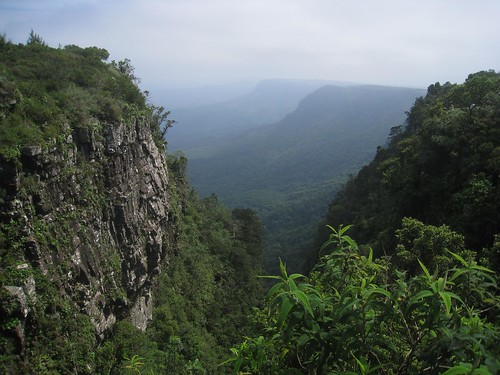 The price for my hasty departure from Gemini Backpackers was a 5:30am pick-up, and another full day of driving.The thought of having to spend another night in the dreary dorm was enough to get me out of bed on time.Gideon, the driver for Livingstone Trails, then spent the next two hours picking up customers from various backpackers around suburban Jo'burg until we had a van filled with 10 people:2 Spanish guys, 2 Australian girls (though one was originally from South Africa), 3 other Americans, including a father/son combo (again, the parent visiting the son studying abroad), a lawyer from Alexandria, VA (a few miles from my home), a Swede with whom I would share my tent within Kruger, and an English chap. 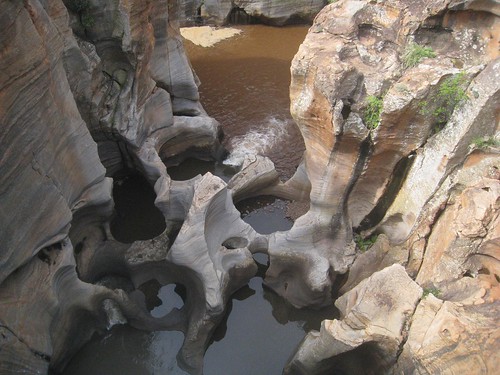 We then made our way east, taking a break from the van for a sit-down lunch before scenic stops along the Panorama Route.First up was a view of Blyde River Canyon.Second, and more interestingly, was Bourke's Luck where the pebbles swirled around by the confluence of two rivers has created unique potholes out of the rock.And there was a nice waterfall too.Lastly, we stopped at the Three Rondavels.Erosion created hills resembling the traditional Xhosa rondavels which I had first seen along the Wild Coast. 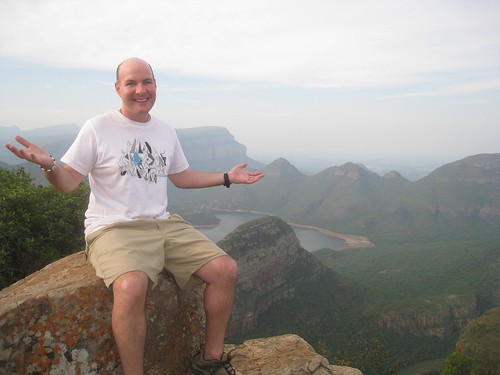 Everyone was glad to reach the 3-star Timbavati Safari Lodge 30km outside of central Kruger's Orpen Gate.We claimed safari tents (with regular mattresses) which were already erected, washed up, and met at the bar in anticipation of dinner and entertainment.Gideon had us in the dining area first, so we also hit the buffet before the rest of the guests.The tables were set outside around a campfire, and the traditional African food was delicious. 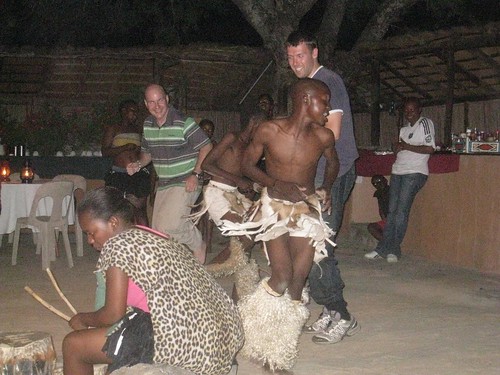 After dinner, a group of kids gave a performance. It started with the boys dancing while the girls sang.Fifteen minutes into the show, one of the boys came to our table for volunteers.The audience participation was about to begin, and I decided to accept the invitation.The English guy also joined me and we danced around on the sand in front of the whole camp in an attempt to mimic the boys.Then, it was the ladies' turn, with a few from the bigger (notably older) tour group getting up to shake their hips while the boys sang. 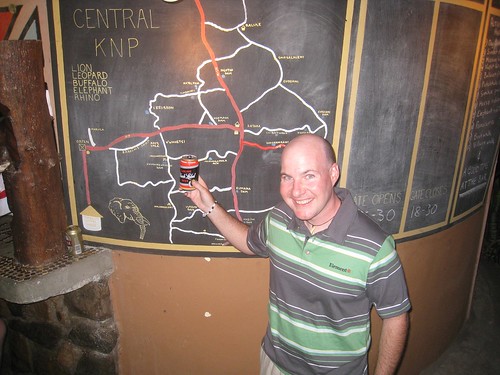 Before bed, I hung out with a few of the guys from our group at the little poolside bar. There, we encountered a speedy arachnid (not a spider according to a safari guide who was all too happy to try and catch it for us), and my first big dung beetle (though not of the rare flightless variety found in Addo Park). The barman also told us they had recently fished a cobra out of the pool.

Wow...beautiful..Glad to read this blog.... Thanks for those informations that I found on your site. Have a nice day.

Thanks for the tip, the flight would save a lot of driving time.

Thanks for the tip, the flight would save a lot of driving time.

Hi Dave. Actually I used their services to help me plan me cross-africa trip in 2005. In the meantime I live in SA and explore all around. If I may suggest a tip: Fly to Victoria Falls from Kruger Park. Short, cheap flight but amazing trip. The Falls are awesome.

I did, and since you run tours in Kruger Park, it'd be great if you could offer any advice to future readers.

Thanks for stopping by.