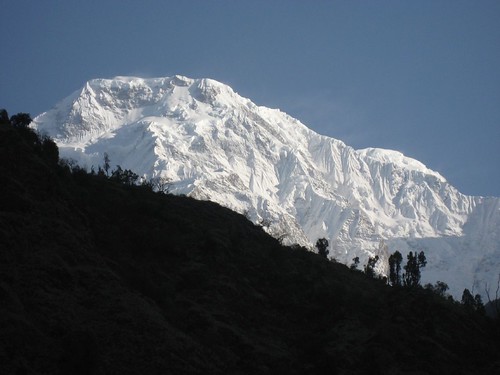 Oh I'd rather go and journey…Where the diamond crescent's glowing and…Run across the valley…Beneath the sacred mountain…And wander through the forest…Where the trees have leaves of prisms…And break the light in colors…That no-one knows the names of. — The Byrds 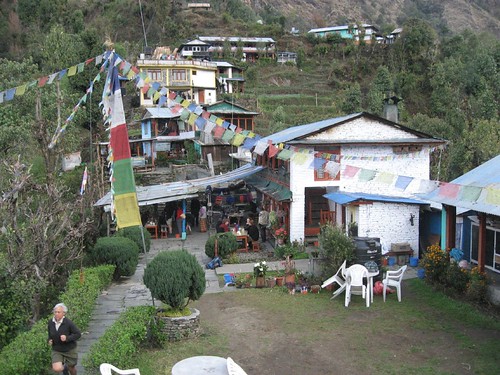 At 1 am I awoke with uncontrollable shaking throughout my body. I felt cold but when I felt my skin it seemed warm and clammy. I changed into my thick fleece, put on socks, beanie, and gloves. And I turned around on the bed so my head was away from the window. After zipping up my sleeping bag all the way, I began to feel better, and the shaking/shivering ceased. During this time, I contemplated waking Gela, and trying to find our guide Mohan. The problem was I didn't know what room he was in to try and get a blanket. In the end, it was an experience in self-reliance and simple survival.

This morning I awoke at 5:45 am when Gela rose and said “wow” upon looking out the room's window. She didn't realize how close the mountains were to us. I managed myself out of bed to breakfast after a massive misfire on the first squat toilet I've needed to use in 10 years. Washing it down and cleaning up was surprisingly easy. 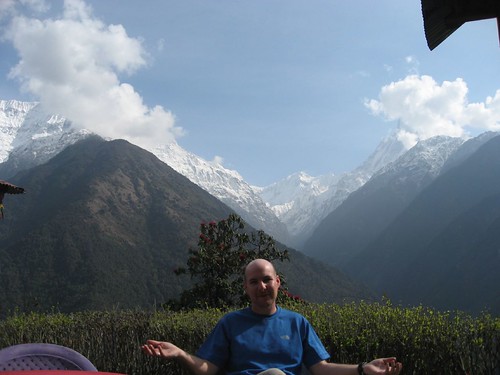 I had porridge and hot water again for breakfast. I still didn't have much of an appetite but it was tasty. I knew it was to be a tough day, and set off with the group in high spirits.

We ascended the steep section from Jhinu danda to Chomrong in about an hour's time. It was exasperating. It felt amazing to hike up to a point that seemed to simply tower over us the day before. We then headed down the mountain to cross the river and head back up more steep stone stairs to Sinuwa. Clouds were upon us and rain had begun to sprinkle down. It was cool. 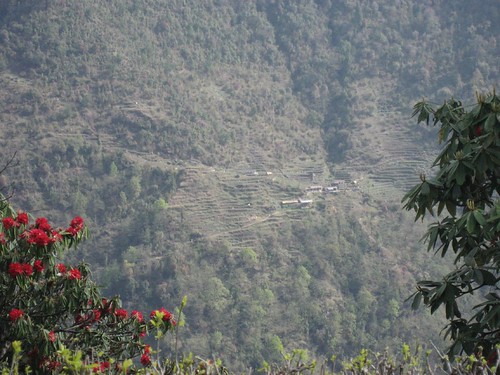 I was panting heavily by the time we stopped in the Sherpa Guest House in Sinuwa. I started to notice I remained winded, breathing heavily, well after everyone else was fine. I layed on a bench and my breathing relaxed a bit, but my arms and hands began to tingle (in a way I've never felt before). At first, I thought they fell asleep, however Mohan and Nima started to check my pulse, recognizing something was right. This action drew the attention of others in the restaurant. A group of older French women were also relaxing (on their way down from Annapurna Base Camp) and one of them called her friend Isabelle over, as she was a doctor.

Isabelle didn't speak fluent English, however she asked questions like how much I'd had to eat/drink, how I slept the prior night, if I had a headache. We took my temperature (with the thermometer I brought) and there was no fever. It didn't seem to be the altitude as I had no headache. Basically, she diagnosed me with exhaustion and not eating/drinking enough. Upon reflection, I ate far too little for the physical activity I was enduring, however this was much in part due to my Giardia/stomach problems. And what I was ordering – plain rice/potato curry/tomato soup – I wasn't eating a lot of. 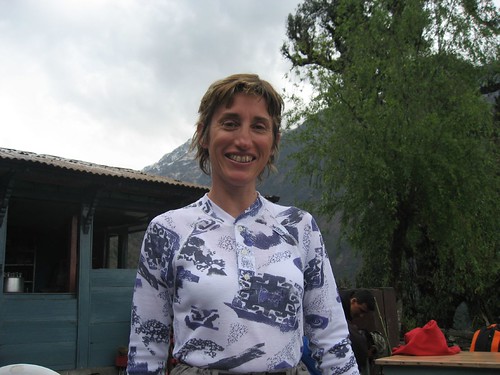 Isabelle had me eat a recently bought Snickers and I started to consume garlic soup ordered earlier by Mohan. I slowly lost the tingling feeling in my arms and hands. Isabelle suggested I sit outside as the sun was shining after the short rain. The view was much better and the warm heat felt good. I stared south down the valley, trying to eat more plain rice and toast with jam (doctor's orders). Mohan poured out my water which I had messed with earlier by adding rehydration salts. I hadn't been drinking as much since it tasted so awful. One of the French women brought to my attention that the third day of a trek is notoriously hard, given the first day or two are often driven by adrenaline and a fresh body. She also said I was looking better than when she first saw me. Apparently my face and hands were pale white twenty minutes prior.

As I felt my energy return (especially after drinking a liter of boiled/filtered water), my thoughts turned to what would happen next. I deserved a piss. I followed Isabelle's instructions by taking a rest in one of the guest house beds for 30 minutes – a bit longer than suggested but it felt comfortable and safe.

Nurse Amy – I'm curious to hear if you have any thoughts on what might have been happing. I'm guessing low blood sugar and high blood pressure? 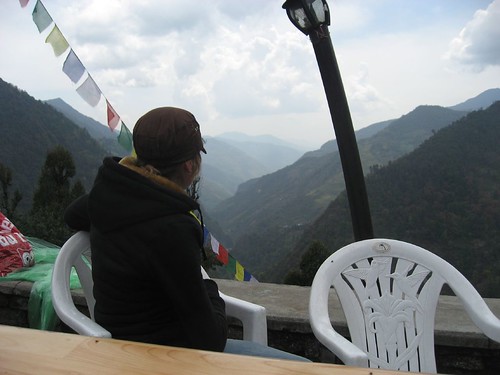