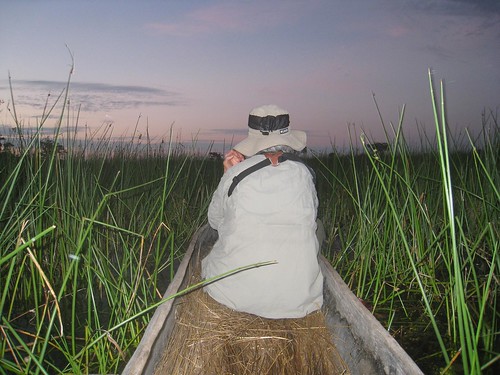 On our final morning in the Okavango Delta, we set off on a two-hour game walk around the same island we walked across the first night.

This time, we saw our one and only hippo of the trip. It was alone and staying well hidden in the water. It should've been exciting but it wasn't. 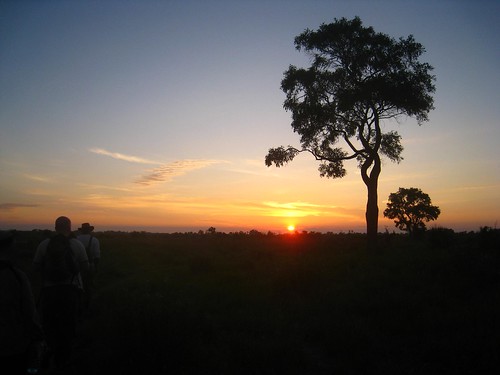 Back at camp, we ate breakfast, packed our gear in the mokoros, and set off in the same arrangement we used to enter the Delta. I resisted any urge to take photos.

Instead, I leaned back (they created seats from our sleeping mats) and enjoyed the peaceful nature intrinsic to riding through the water in a mokoro.

Drifting silently through the reeds, the occasional bird taking flight from around us, and the occasional spider web to duck, I knew it was just the sort of escapism I would desire after a few months back in the working world. 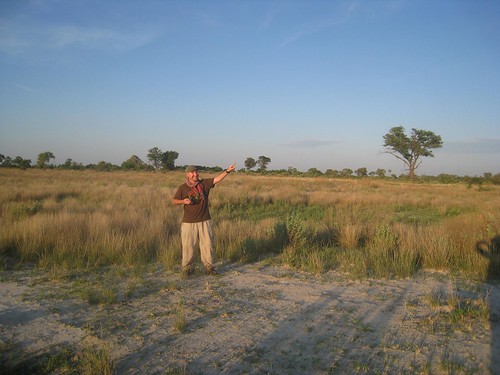 I gave the lead guide our collective tip for a job well done, and we said goodbye to them all as their family members came from the village to greet their return.

Meanwhile, our truck puttered back toward the Delta Rain campsite and my attention turned to the odds I would be able to fly over such a wonderful landscape, the world's largest inland delta.

I had already broached the topic with Carmelita, offering to split the cost of a plane 50-50. She wanted to wait until we were back in Maun to decide. 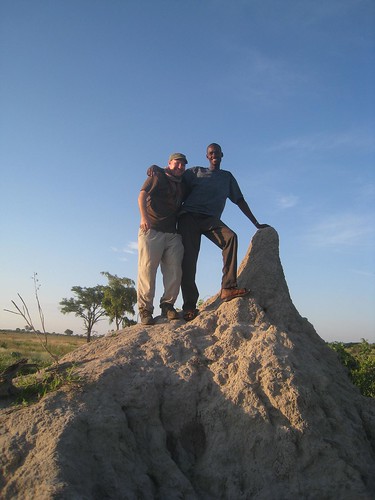 Once the truck dropped us off at Delta Rain, Richard and I set up our tents while Peter and Ingrid accompanied Dion to town so they could use the internet.

While they were gone, I confirmed Carmelita's support, set up a flight through the campground's office, and paid a King's ransom for the privilege of a scenic flight. 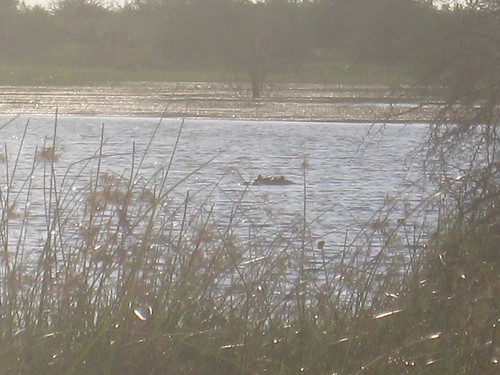 I rejoined Richard at the bug-filled pool for a beer. He had been plucking the unique, but dead, buggers out and arranging them in a little showcase. 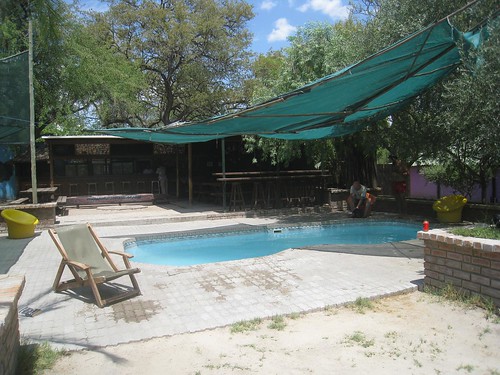 Dion recruited Peter to keep him company at a bar across from the airport while Carmelita and I took to the skies with Chris, a young bush pilot, in a 5-seater Cessna.

We walked up to the plane on the tarmac and it was even smaller than I expected. I asked for the front seat, and Carmelita in her good nature (or perhaps sleepiness), obliged. 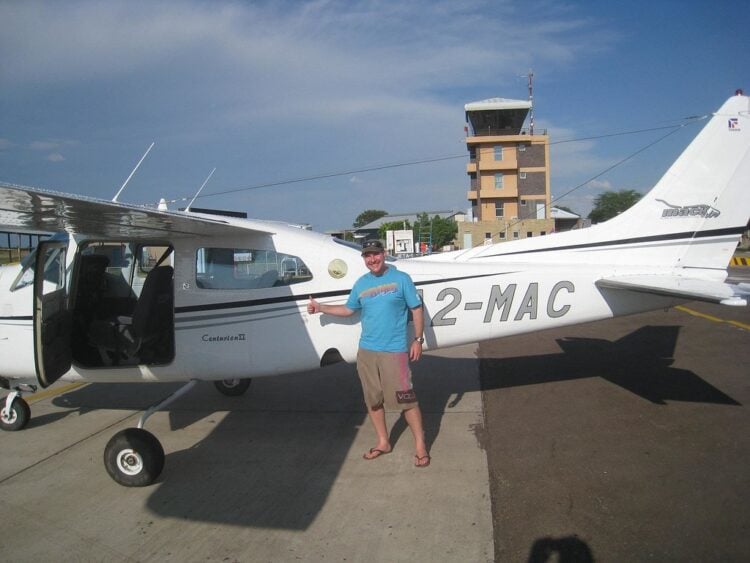 We taxied to the top of the runway and took off for 45 minutes of animal-hunting from above.

The adrenaline rush during take-off was the missing ingredient in my Botswana trip.

The flight deck (as they say in “Top Gun”) was 300-feet, and Chris' response to my concern about the dark and foreboding storm clouds (and lightning) in the vicinity was the simple response that we'd go around it. 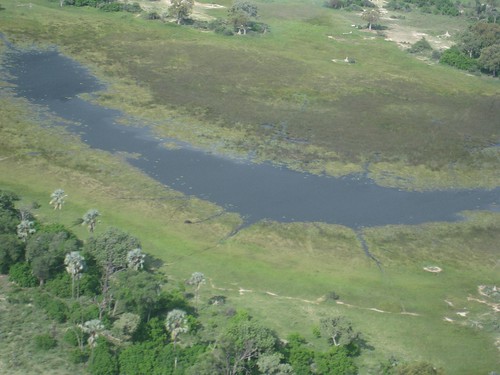 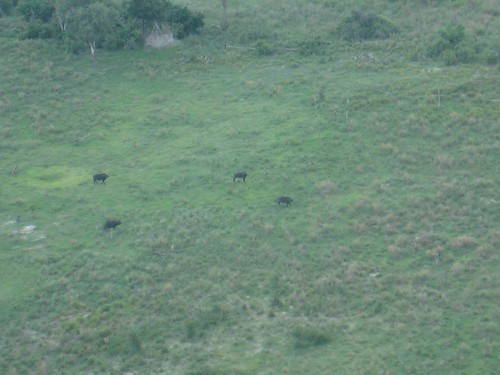 Three minutes into the flight and we were flying over the river channel we used to reach camp in the mokoros.

There were some bumps from turbulence, though I got accustomed to it quickly.

A few minutes later, we started spotting animals, buffalo, and warthog, elephant, giraffe, antelope, my first wild hippo out of the water. We saw large families of elephant moving together. 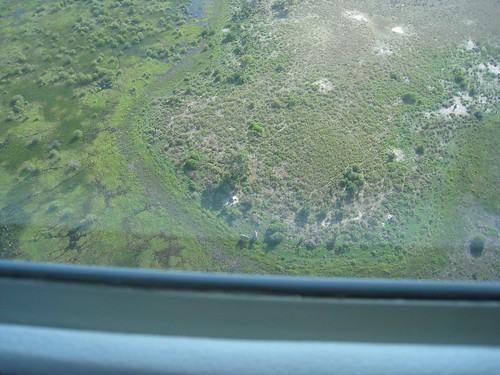 Seeing such big animals seem so small in comparison to the surrounding landscape was fantastic. They were difficult to photograph as we passed them quickly.

At one point, I turned around to find Carmelita snoozing. It occurred to me that she was on the flight more for my benefit than her own, though it didn't matter at the end of the day. We both enjoyed seeing the bigger perspective.

I was satisfied with my Botswana trip after the flight. 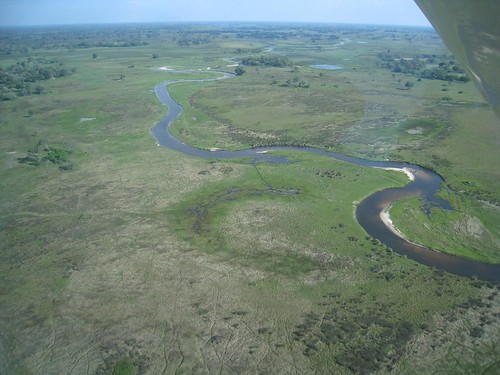 We ate dinner and played a card game (Black Jack) Richard had taught us previously.

Aside from us, the rest of the bar seemed to be populated with the eccentric tour guides from various overland companies, enjoying themselves while their customers ere camping in the Delta. 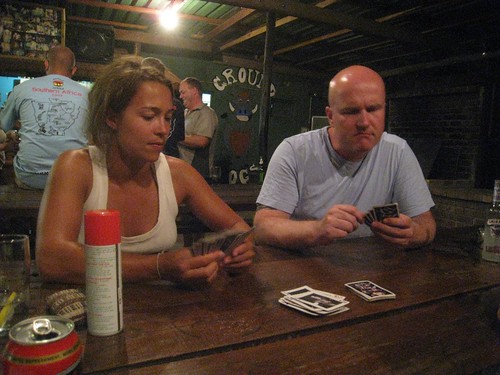 Ingrid liked to comment “they all look the same” which was an observation I made too.

Common characteristics included big bellies and custom made t-shirts bearing the overland route they were guiding.

Did you get any photos of the T-Shirts? I'd find it interesting to see the different routes- that's such a creative way of advertising!

Did you get any photos of the T-Shirts? I'd find it interesting to see the different routes- that's such a creative way of advertising!