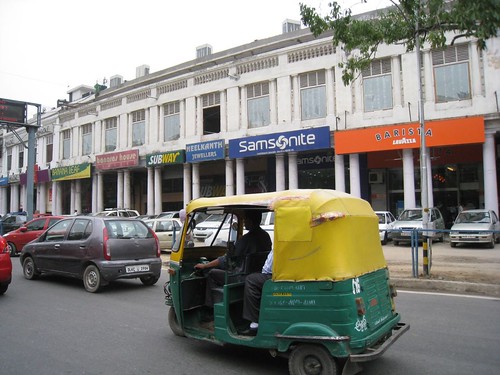 I was confident from perusing my guidebook that a fair rate for an auto rickshaw to my first and second choice guest houses would be about 40 rupees ($1). Before I reached the rickshaws, I was picked out by a gaggle of taxi drivers. The first one quoted a rate of 550 rupees ($13.75) which resulted in a hearty laugh from yours truly. Eventually I negotiated a rate of 200 rupees ($5) from another driver which was still much more than I had intended to pay.

The guy arranging the ride kept suggesting I visit the official Indian Tourism office before going to the guest house. I had read about fake tourism offices in the guidebook, but more importantly, just wanted to settle into a room so I could get some much needed rest. I firmly told the handler I wanted to go straight to the guest house, and I relaxed after hearing him relay instructions in Hindi to the driver. A mystery man jumped in the passenger seat, and we soon melded into the big-city traffic. 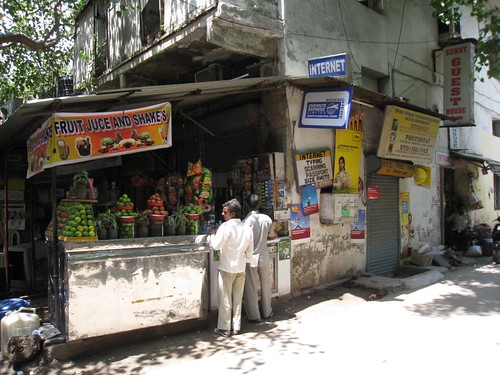 If you've been reading about my adventures in , then you can guess what happened next. The taxi stopped at the ” official”? tourist office. I sat there wondering what the hell I needed to say to be any clearer with these guys. Unsure of my proximity to the guest house, I entered the office armed with a bad attitude. I sat in front of a desk covered in Indian postcards highlighting the country's most popular attractions. I was short with the guy who greeted me, and to his credit, effectively calmed me down with a bit of patience, chai and cookies until the booking agent arrived. I quickly cut off all of his attempts to raise the prospect of sightseeing…anywhere.

After some chit-chat, I told the booking agent I wanted to see Sunny's Guest House and he had the mystery guy from the taxi show me the way. Before I left, I asked about the cost of a room with a private bath in the area, and he said 2,000 rupees ($50) minimum. Sunny's was only a few meters away. They showed me a series of rooms, starting with the cheapest shoe box, and working up until we reached the costliest option, a double with private bath for 400 rupees ($10) a night. 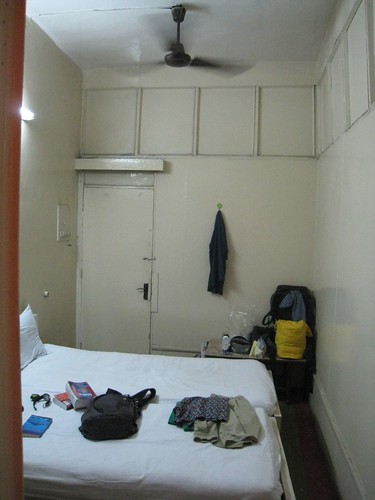 After a few hours under the ceiling fan, curiosity lead me out the door. I ate a delicious, spicy Indian chicken dish at a nearby bar and restaurant, Regent Blues. Satiated, I continued to explore the area. A young guy in a green camouflage t-shirt struck up a conversation with me. Despite my attempts to get rid of him, he walked along with me stating he just wanted to practice his English and didn't want money.

I knew the “practicing English” line comes from hustlers. I thought I could use him to get some local info though. At my request, he showed me the way to the nearby cinema, though it was only showing Hindi movies. I asked about a place to buy/sell used guidebooks, and he wanted to take me to a bazaar but it sounded too far away for my taste so I declined. I asked him if there was a restaurant around where I could order vindaloo (a spicy Goan dish). He said he knew a place, but first he wanted to take me to a souvenir emporium to earn a commission. I appreciated his honesty, and agreed to spend a few minutes in the place to help him out. In retrospect, I think the good hustlers say they're being honest because they know it is more likely to elicit sympathy and support from tourists.

I recognized the name of the emporium as one listed in my guidebook, which was somewhat reassuring. The salesman was fairly low pressure, and polite, though I left empty-handed as planned. As we walked further away from

Connaught Place
, presumably toward the restaurant, he brought me to a second shop. I initially declined, but then gave in. This time I left the shop with a small gift for a friend at home.

I expected the guy would continue the circular route back toward my hotel with me as he implied earlier. Instead, he pointed toward the supposed location of a restaurant serving vindaloo, and the way back to my guest house. When I addressed the fact that I expected him to walk me back, he pointed to his feet, saying he was tired and would only go with me if I paid for a 20-rupee rickshaw. Annoyed at having been hustled, I set off on my own.

As I walked along the busy roads, I saw only a retail shop where he said I'd find the restaurant with vindaloo. Angry, sweaty, and tired, I pressed onward using the digital compass on my watch to get my bearings. I was sure the direction I was heading wasn't correct, so I asked a gentleman on the sidewalk for help. He said I was walking away from the center circle, which meant I was going the long way back. I did an about face, retracing my way back while fuming at the fact that I'd gone out for a leisurely stroll and been taken for a ride at the expense of my good mood and already aching feet.

Hi Dave....you are right about the taxi fare...you should always bargain as much as possible because at times(mostly in New Delhi)they tend to charge foreigners almost more than the double of the actual fare...!! As for Hustler's,you really can't help it....you would find them all over Connaught Place.

Hi Dave....you are right about the taxi fare...you should always bargain as much as possible because at times(mostly in New Delhi)they tend to charge foreigners almost more than the double of the actual fare...!! As for Hustler's,you really can't help it....you would find them all over Connaught Place.