The first time I recall my parents mentioning their Will was in advance of a trip to Alaska to celebrate their 25th wedding anniversary. My Dad had written up a list of instructions for what to do if their plane were to go down. I remember trying to play it off, and not think about the possibility. Luckily, the trip went like clockwork, though they've reminded me of the list ever since.

I am now in uncharted territory, having very little debt, and a lot of savings. As a result, and in the event I am knocked off by narco-terrorists or a gonzo sting ray, I decided it would be prudent to draft a Will before leaving the country. In addition, I wanted to give my Mom Financial Power of Attorney so she could act on my behalf (such as being able to deposit money to my accounts, cash checks, help me with my taxes, etc.). Rounding out the legal trifecta would be an Advance Medical Directive in case I end up in a vegetative state someday. 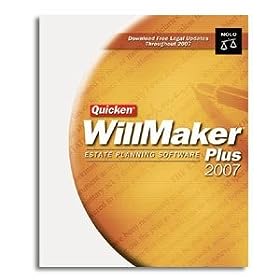 Initially, I expected to have to hire a lawyer to help me draft all of these legal documents, however my Dad suggested I could find standard forms on the Internet. A few Google searches on the topic lead me to discover Quicken Willmaker Plus 2007 which would allow me to create all of the documents on my own for less than $50. I bought the software, and spent this past Sunday afternoon filling out the questionnaires for each document.

The software lead me through each one step-by-step, in easy to understand, yet detailed language. Since I do not have a printer, I downloaded some freeware to “print” the documents to PDF files. It took a little extra time, as I had to play with the margins to ensure the page breaks were in the right place (as the documents can be rendered null and void if things don't line up properly). I'd estimate it took a few hours. I have a small family, and being single, without children or real estate to my name, I was able to skip a lot of the questions.

My parents are currently reviewing the documents, as I named them as my agents and executors. If they sign off, I then need to round up some witnesses and a notary to make it all official. Surprisingly, I hit this drab task head on while I've managed to put off updating my resume for 5 years! Go figure.