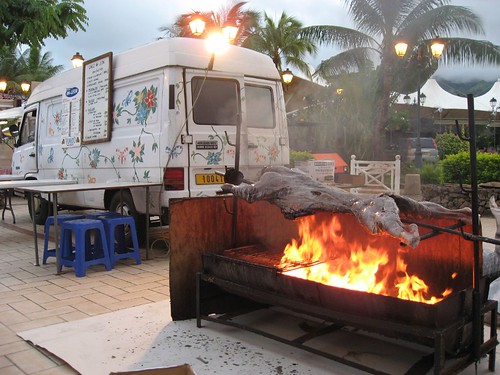 There are two things I tend to avoid during international travel – public phones and driving. I managed the public phones in Tahiti well enough (after that first mishap) and was surprised with a crazy drive on my last night.

Sam picked me up about 2 hours after my ferry from Moorea landed. During that time, I got a veal dinner at the local square filled with roulettes (food vans). Yes, a cut off the animal in the photo is what I ate (with french fries). Sam had to transport his motorcycle from his old house to his new, and he needed me to drive his VW Polo. We headed out of Papeete toward his old house, in the dark, after an hour's rain. The highway part was fine, however we then pulled onto a local road that began to climb up what felt like a mountain. I mean I could feel my ears pop on the way up. He swerved all over to miss potholes (one of the reasons he moved), and broken branches and leaves were strewn all over the wet asphalt. We then hit a stretch of dirt road, where the street lights stopped, and he navigated multiple hairpin turns. Finally, we reached the apex of whatever we were climbing, whereupon there was a house with a view of the distant twinkling lights below.

By the time we reached the top, my nerves were going AWOL. I took a pee down the driveway a bit, and tried not to picture the precipitous cliffs that lined the road I was about to head down (at night, after the rain remember). Sam seemed confident in me, and I'd be driving an automatic VW, so I tried to take some comfort in those facts. I put the car in 1st gear, and off we went.

I'm sure I was hunched over the wheel like a 90-year old grandmother. Did I mention there were no lights during the scariest muddy section? I let the car go slowly down, braking softly for fear of skidding off the mountain. Sam went slow, and after passing a few of the hairpin turns, I started to breathe a little easier. I reminded myself not to get overconfident because even after we hit the lit asphalt section, the road was still wet, and there were crazy dogs that ran out at us at one point. Sam pulled up to me and gave me his cell phone in case it rained, which meant if we lost each other, I was in a bit of trouble! A few minutes later he pulled up and gave me his left side mirror which accidentally broke off. I had to laugh at that point. We breezed down the highway, through quiet Pape'ete, and onward to his new home.

Sometimes the adventures come without warning, and without cost! 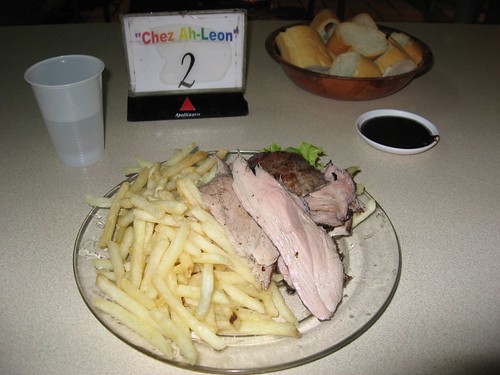 exciting, it could be such a great fun...

what the heck is that animal over the fire - it looks like something from hellraiser.

It was veal - young cattle. Made for a nice photo!

what the heck is that animal over the fire - it looks like something from hellraiser.

It was veal - young cattle. Made for a nice photo!

ACK! Good for you knuckling down and doing it! Glad you made it down in one piece.

ACK! Good for you knuckling down and doing it! Glad you made it down in one piece.