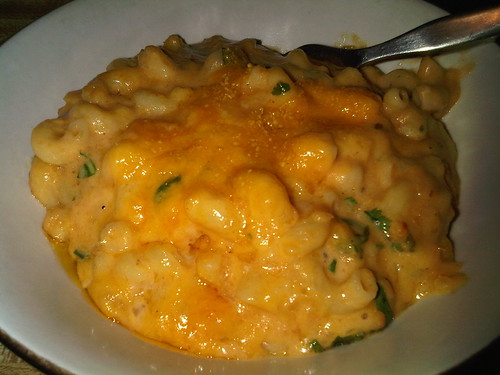 It's a good thing I don't live with my brother, because I'd have a hard time staying away from Sarita's Mac and Cheese now that I've sampled the goods. 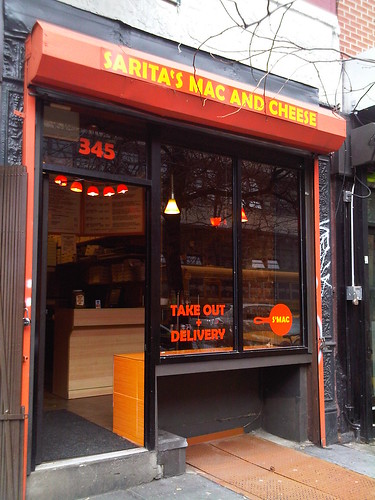 I first caught a glimpse of this East Village eatery's orange exterior a few months earlier while exploring the neighborhood.  I made a mental note to try it out, though in NYC, one's head can quickly fill up with such mental notes.

Last week, with snow in the forecast, the craving for rich, oh-so-bad-for-you, comfort food struck, and I picked up the phone to place an order.

I've grown up with mac ‘n cheese, and tasted a wide range from the frozen, low-fat Lean Cuisine version, to my own go at a Quattro Formaggio recipe featured in Gourmet magazine.  I was being presented with a menu of options, and I had to think outside of the box to take advantage of the opportunity.

Masala macaroni and cheese piqued my curiosity.  Indian spices mixed with cheesy goodness.  How could you go wrong?

I phoned my order, and opted for the dinner portion (aka “major munch”), which turned out to be a pie-size platter large enough to give an elephant high cholesterol.

On the website, it appeared as though the establishment was a sit down restaurant, but when I went to pick up my order, all I saw inside was a small kitchen set up for take out and delivery.  Did they forget to update their website, downsize, or was I missing something? 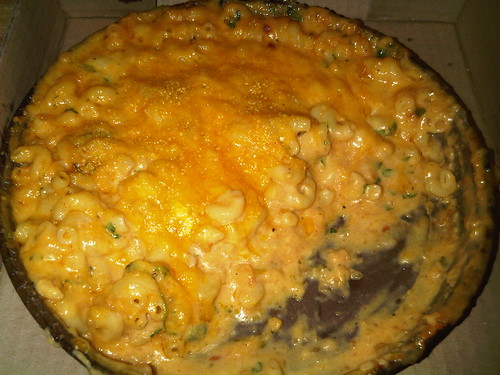 The "Major Munch" serving is enough to last a few days

I returned to my brother's apartment, and served up several hot spoonfuls of the pasta.  The Indian spices gave it a kick, which turned out to be an enjoyable new take on a classic American dish.

Doh, and my brother has since moved to Chelsea :)

that looks so so good! I had mac & cheese last night but it very obviously did not compare

Oh my God ... that looks amazing!!! Mac & cheese will always be my favorite food, and my mouth is watering just looking at these pictures.

that looks so so good! I had mac & cheese last night but it very obviously did not compare