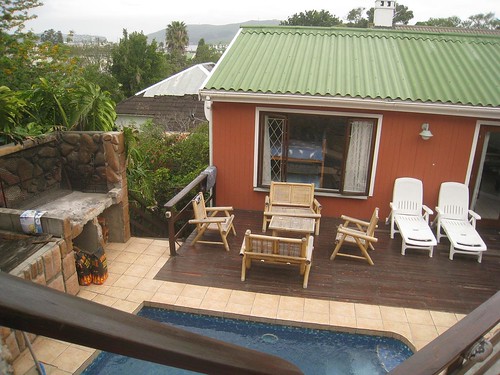 I could only bite my tongue so long before I broke into a conversation on the Baz bus between two guys at the start of their round-the-world trips, a young German and Thomas (England). I suggested to Thomas that if he's going to New Zealand, he not miss the South Island. They played rock/paper/scissors at the next stop and because the German guy lost, he decided to stay the night in Wilderness while Thomas and I continued on to Knysna. 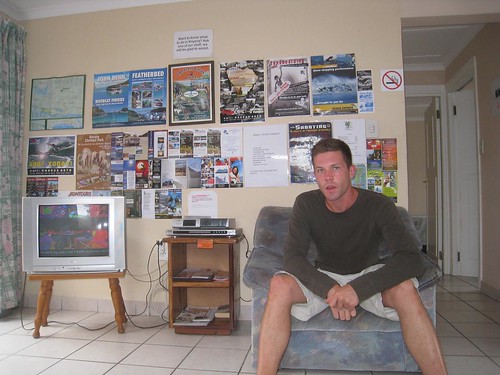 We both got off at Island Vibe Backpackers and checked into the dorm. Offering a mere 30 beds, it was considered a small hostel. Loren, one of the staff, gave us a tour which included the kitchen, balcony with a view toward the harbor, tiny pool, bar, TV room, and the dorm. I liked Thomas right off the bat. Maybe because he seemed genuine, or admitted his fear after being ejected a few times from a raft while navigating the mighty Zambezi River (near Victoria Falls). It was one of many stories he had from a recent 6-week overland journey from Nairobi, Kenya to Cape Town.

At any rate, we met a few Irish and Kiwi girls who were also staying at Island Vibe, and after Thomas and I devoured some quality Indian food on the Main Road, we joined them for a few beers at the little hostel bar. I never knew Jenga could be so fun. Unfortunately, Thomas was on a tight schedule, traveling from Cape Town to Jo'Burg in just 7 days, so he left on the bus later the next day. 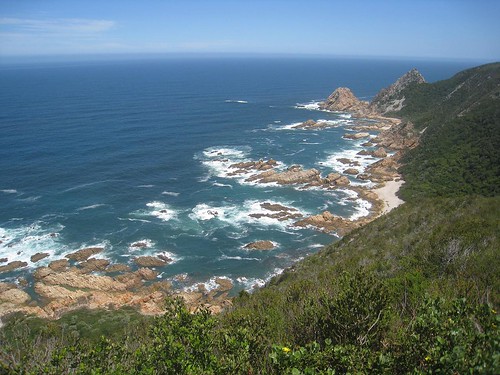 I was hopeful to find two other people interested in going to the shooting range. From a poster on the wall in the TV room, I made a call and talked to one of the owners. He had an arsenal of 600 weapons including all sorts of machine guns, pistols, and rifles, of which I could choose 8 to fire, at a cost of 1,000 Rand, or about $100. Given the same amount bought far less in Thailand, let alone Australia, I felt compelled to make it happen. It didn't work out in the end, but he did name drop Dave Mathews, saying they were friends from school in Jo'burg and that when he comes to visit, he takes him to the range. I responded that Dave Mathews didn't seem like the gun type, and he confirmed he was a wuss, but did it anyways. And then he told me a story about how his wold champion marksman of a partner was just getting out of a 6-week jail term in Egypt because his guns were seized as he traveled to Israel for a two million Rand bodyguarding contract.

There were plenty of other activities in the area to take my mind off the shooting range. I opted for a peaceful guided hike through the local forest. It was lead by a guy named Orin who managed to make an otherwise routine hike around a valley by the coast interesting. I am now adept at identifying the local sage plants! 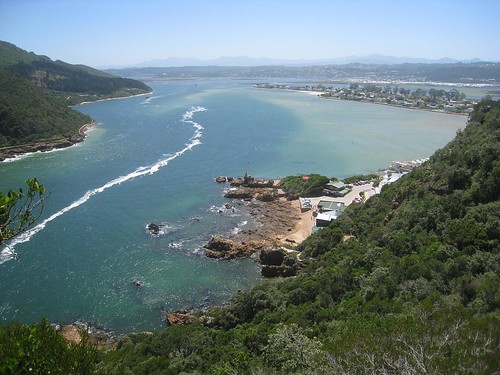 After the pleasant two hour hike, he drove me up to the Knysna Heads, a pair of opposing cliffs which mark the natural entrance to the harbor. Knysna is a popular vacation destination for South Africans as a result of this unusual coastline geography.

Orin later assisted me in setting up a homestay with Brother Paul, a member of South Africa's largest Rastafarian community.

Is it strange to be on the 'other side' of the RTW triping? You've been at it almost a year now... is it weird to be the seasoned one at the hostels and bars dispensing valueable advice to the newbies?

Is it strange to be on the 'other side' of the RTW triping? You've been at it almost a year now... is it weird to be the seasoned one at the hostels and bars dispensing valueable advice to the newbies?