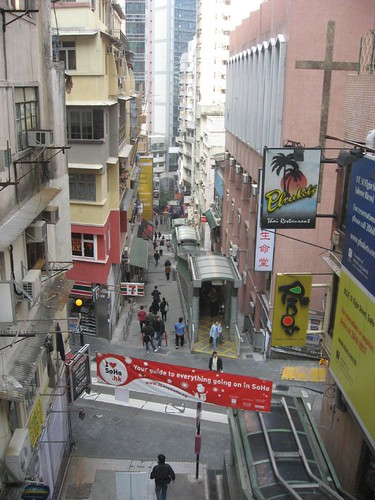 After our shopping spree the previous day, Adam and I headed to Hong Kong Island for some touristy sightseeing.

First on my list was the Mid-Levels Escalator, the world's longest, transporting people 800 meters uphill past restaurants, bars and shops in the SoHo district.

After 20 minutes of riding the series of escalators, we were met by an anti-climactic end.

Looking back, it would've been more fun to have spent the next few hours on a bar crawl back down the hill, stopping in bars for drinks and dinner along the way. 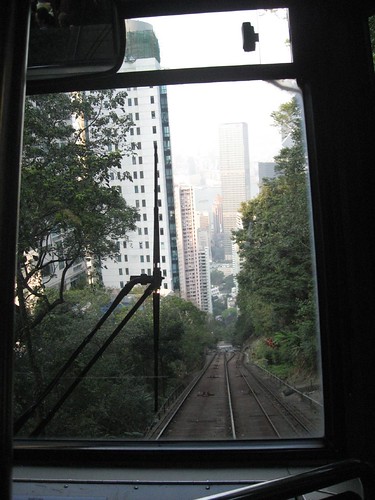 Instead, we had a hell of a time finding our way to the Peak Tram by way of the Zoological and Botanical Gardens.

Streets seemed to bend and curve in confusing ways.

Eventually, we made it to the tram, paid for our tickets, and rode the sucker up Victoria Peak. It was a rather steep ride, with fantastic views of the city below (despite the omnipresent haze of pollution). 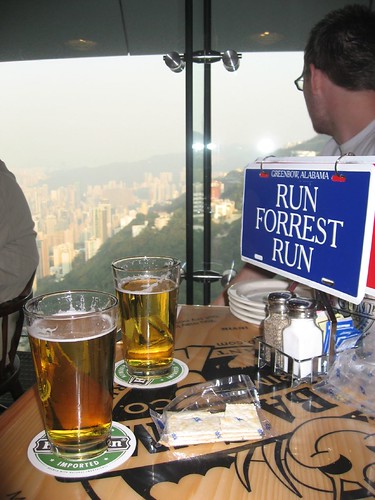 Once atop the peak, we grabbed a Tsing Tsao beer from the scenic outlook inside Bubba Gump's restaurant.

I have no shame in admitting this stuff anymore! 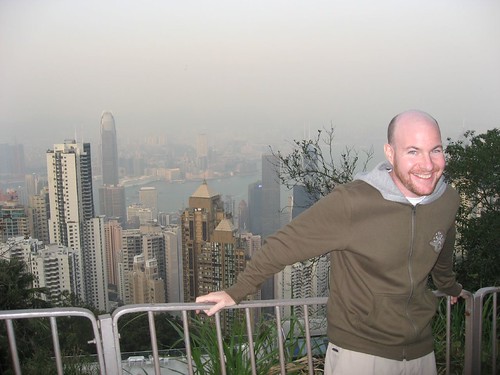 We took a taxi back down to the IFC building, however, the free scenic outlook from floor 55 had closed 30 minutes earlier.

We boarded the ferry back across the Harbor with some time to kill before watching the Symphony of Light, the world's largest permanent light show (projected from atop the buildings on Hong Kong Island).

We ducked into an arcade next to an internet cafe I had used previously.

Once inside, Adam was in his element, though all of the games, and most of the instructions, were in Chinese.

Still, I managed to find an affinity for Guitar Freaks, Dance Mania, and Dance Dance Revolution.

At 8 pm, we ducked out to the harbor and watched the light show.

It started with the buildings being introduced one by one, as lights and lasers flashed from atop each one.

Then the music kicked in (from speakers around the observation deck we were under), and the symphony of lights began.

It was surreal and fantastic. It is officially a must see in my book.

Love all the opinions expressed here! How is everyone? Love how everyone expresses whatr they feel :)