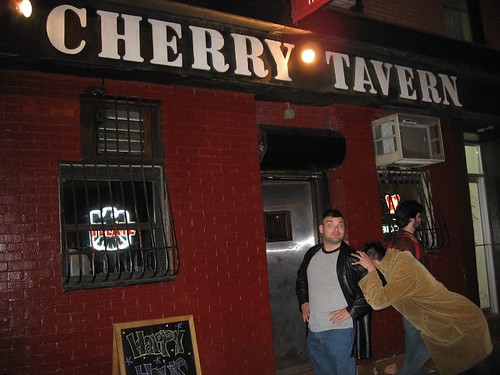 “I'm going to forever associate your apartment with hangovers,” I half joked to my brother. Indeed, while I only had 5-6 drinks Friday night, I've cut back on my alcohol consumption over the past few years. The tolerance I once built as a young buck is a thing of the past, which is not necessarily a bad thing!

It was about noon when my brother Jon and I left the apartment to meet up with his old friend, Brent (and girlfriend). The movie was Grindhouse, a double-feature with the first movie directed by Robert Rodriguez, and the second by Quentin Tarantino. It turned out to be 3 hours and 15 minutes of blood curdling gunfire, yelling, and loud music. Quite the way to recover from a late night! After the movie, we got a bite to eat at Jackson Hole, a western-themed restaurant a block from my brother's apartment. Soon after we sat down, Alexander Rodriguez crushed a bottom of the 9th grand slam to bring the Yankees a come-from-behind win against the Orioles! I had a guacamole-smothered chicken sandwich which was about all I could handle at the time. We returned to the apartment, said goodbye to Brent, and I plotted our next move. 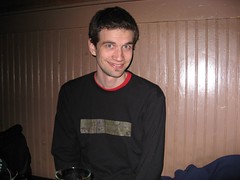 It'd been several years since I saw my college friend Andrew (see Breathingplanet in my blogroll), and we had recently reconnected via MySpace. Since he was living in Brooklyn, I called him and we made plans to meet downtown. We ducked into Local 138, a random bar near the cross street we had picked. I ordered a couple of Strongbow ciders, my brother and Andrew beers, and we got into a variety of conversations as we caught up on the past few years.

After a few drinks, we headed over to my brother's favorite (dive) bar, Cherry Tavern. About an hour later, Kai met us there, and we loaded up the jukebox with tunes, and had another drink or two. I was struck by how Andrew strongly encouraged me to use my trip as a way to network, and take my website to the next level. He also introduced me to the coolest business card. You can use Flickr photos to create your own MiniCards online. You can get 100 cards for $20 at Moo. I fully intend to design and order some this week! Around 11 pm, Andrew said goodbye.

By now, Kai, Jon and I were getting hungry. We walked over to Hearth which we skipped the previous night, however their kitchen was closed by the time we got there. This turned out to be a GREAT turn of events. After checking one other place (whose kitchen had also closed), Kai suggested we go to Blue Ribbon, which was known for staying open late (4 am to be exact). My dinner at Blue Ribbon, between 12 am and 2pm Sunday morning, was one of the best in my life. As a result, I am dedicating Part 3 of this series to that meal alone.

After dinner, we grabbed a taxi to carry our drunk selves home. I crashed on the futon again, completely satiated with the night and weekend's events. Good friends and food in the best city on Earth!

Remember to check back tomorrow for my Blue Ribbon restaurant review.

Can't wait? See all my pictures from New York City on Flickr.

Appreciate it to get a pretty clear and valuable submit. I'm most certainly a violator of a lot of these policies. I generally acquire me personally conflicted when producing a blog publish because I see myself personally creating greater than men and women want to read, but I feel that I really have to do the topic matter justice by completely addressing it. I feel that by subsequent a number of these rules I end up cutting out necessary aspects to the discussion. I guess you will have to come across a balance.