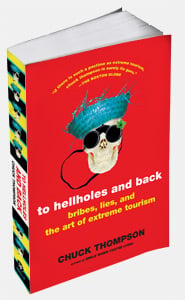 to hellholes and back by Chuck Thompson

I have a few opinions on travel: one should learn some historical background to understand the culture of today, one should try their best to speak the native language as to not “lose things in translation,” and one should never expect a place or its people to adjust to one's own way of life.

For as seemingly inconvenient and ridiculous in the eyes of an American, many customs are just that, customs of one beautiful and distinct culture, and should be approached with an open mind.

Chuck Thompson is a native Alaskan, the former and first editor in chief of Travelocity magazine, a travel guru (according to his publisher), and the author of Smile When You're Lying, and most recently, To Hellholes and Back. And his travel opinions most likely differ greatly from my own.

I am making this assumption from personal experience as I had the pleasure of hearing him speak on January 21st at my university while he was in the midst of his book tour around our “great country with a real screwed up foreign policy.”

Immediately I was struck by his casual, laid-back demeanor.

I found him to be strongly opinionated, fearless in how he would be perceived as a result of this, and finally, wickedly entertaining as he led us through a book reading and answers to audience members' questions.

Would I want to read his books, however? Probably not, too tongue-in-cheek for me.

But I'll let you make your own decision, of course.

He was inspired to write To Hellholes and Back by the concept of extreme tourism.

To most, he says, images of million-dollar space trips, and grass-huts in rural Asia come to mind, but to him, extreme tourism could lead you anywhere, so as long as you are taken outside of your comfort zone.

And so he made a list, a long list of places that he was intimidated by, had prejudices against, and would never in a million years want to travel to: The Congo, India, Mexico City, and Disney World.

To him, the Congo was the sum of all African fears, the heart of darkness as described by Joseph Conrad.

He found the idea of India to be surrounded by the paranoia of economic fears, terrorist threats, and the horror stories of friends.

Mexico City was controversial in the midst of a heated immigration debate and the capital of Latin American drug lords.

And Disney World, oh Disney World, combined all the pains of traveling, in his opinion, with the glory of “dumb animated figures in a stupid and juvenile environment” alongside bratty children.

What he found, was that countries are a lot like people in high school, 90% of what you think is hearsay.

He then spent six weeks in the Congo, 31 days in India, five weeks in Mexico City, and seven days in Disney World (he claimed to not have been able to handle any longer of a stay).

He did thorough pre-trip research, took endless amounts of notes, and met multiple people like Ahri in Africa who, “turned out to be as much of an experience as the country itself.”

And then, after many months of writing and re-writing, his second book, To Hellholes and Back, was published.

It is described by Jaunted.com as “well-written, funny, and fast paced.”

They say that “it's refreshing to read a travel writer who eschews all the “sun-dappled vista'-style prose and tells it like it is.”

Surely they have met Chuck Thompson because according to him, that is what his book is all about.

“You can only describe sunsets and food for so long, what really brings a country to life is people.”