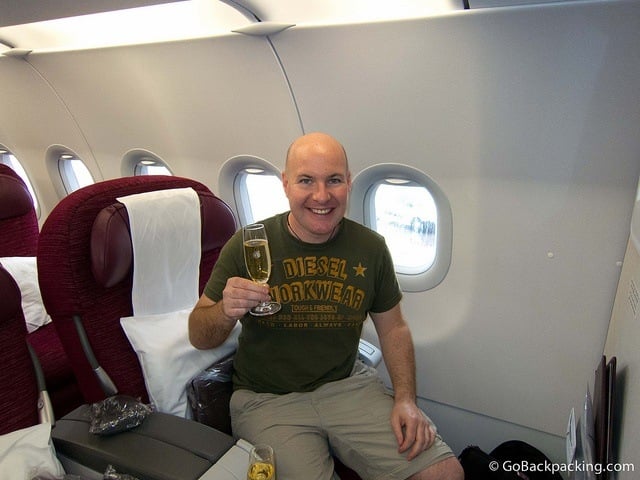 [W]hen Indonesia's Ministry of Tourism gave me the opportunity to choose my own flights from Berlin to Jakarta, I jumped on Skyscanner, and began a search.

When Qatar Airways was one of the first airlines to appear for that route, I knew my search was over.

I'd flown Qatar on another long, 2-day route, from Bangkok to South Africa. The service, and especially the food, impressed me so much I wrote about it at the time.

When the counter opened, I approached as normal, only this time, I was given the surprise of my adult flying life — a free upgrade to business class!

Thomas Stetz, an Airport Services Manager for Qatar Airways delivered the good news, while I stood there in disbelief.

I don't mess around with loyalty programs and collecting frequent flyer miles, so “business class” and “airport lounges” have not been part of my flying vocabulary.

After completing the check-in process, I was given directions to the airport lounge.

The quiet, comfortable atmosphere was a refreshing change from the rest of Tegel airport, which I didn't particularly care for (and is closing in 2013 due to the opening of Berlin's newer, larger airport).

Later, upon passing security and boarding the flight, I took my window seat, 1A, at the front of the plane.

To my right was a German businessman sipping a glass of champagne.

When the stewardess offered me a pre-flight drink, I pointed at his drink and said “I'll have what he's having.” 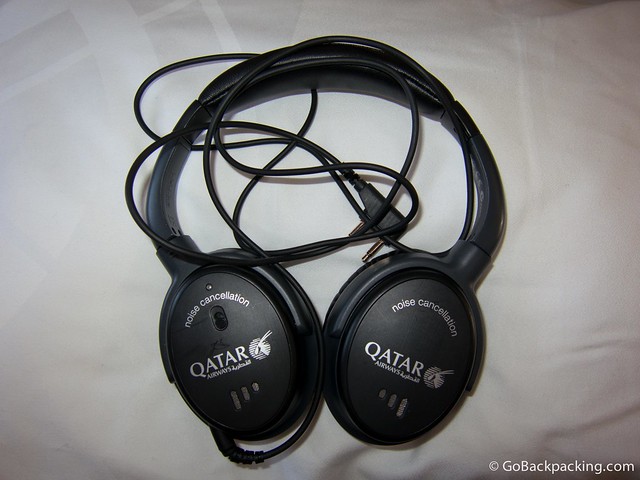 Then came the amenities. My favorite were the noise canceling headphones.

Now I understand why people walk around cities wearing these oversized headphones, they really do make a big difference.

I don't know how I can go back to using my Apple ear buds after hearing how well the noise canceling headphones block out the constant roar of plane engines. 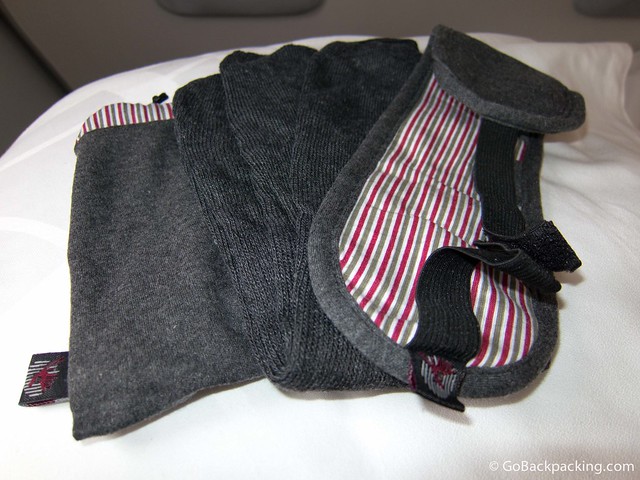 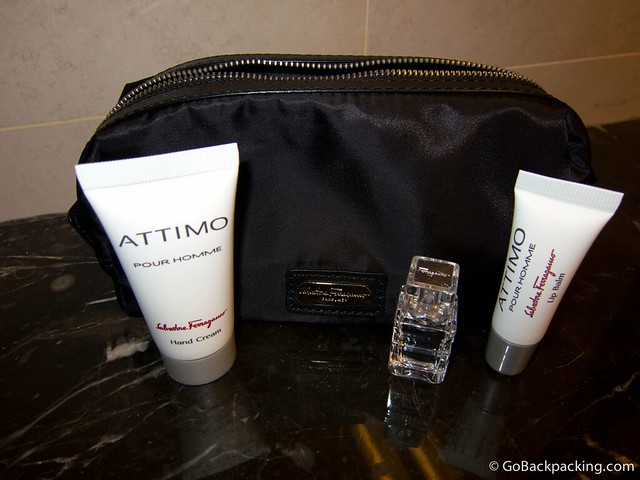 Another bonus was the designer toiletries by Salvatore Ferragamo, offered both for him and her.

The accompanying nylon bag was nice enough for me to keep, thus replacing the Hefty Ziploc bag I'd been using recently. 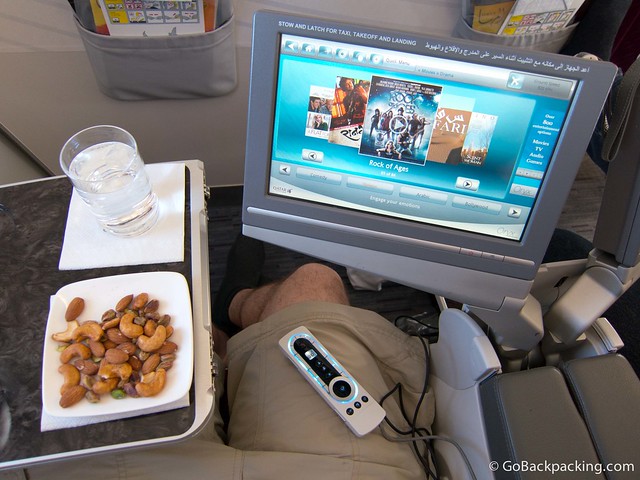 After take off, we were served mixed nuts, and more drinks.

I powered up the Oryx in-flight entertainment system, which featured an impressive amount of movies, TV shows, and music.

I believe the selection is the same for all passengers, which is one of the nicer aspects of flying Qatar, whether in business class or economy. 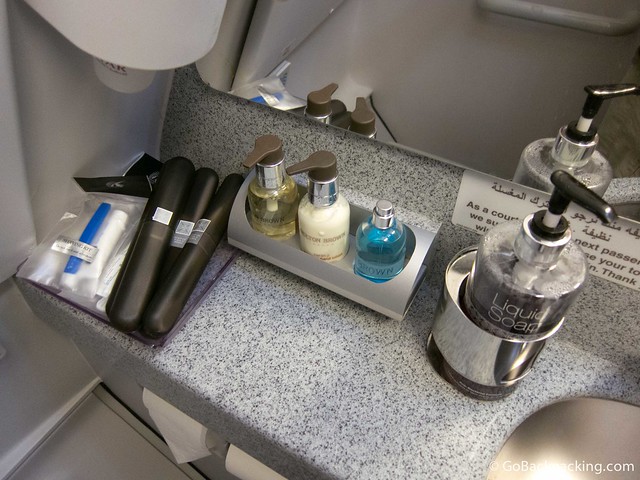 Amenities in the business class bathroom, including disposable toothbrushes with toothpaste

The business class bathrooms were equipped with extra amenities, including toothbrushes (which are exactly what I want after a long flight), and disposable razors.

It also smelled nice, and because there are fewer passengers per bathroom, there's little to no wait time whenever you need the facilities. 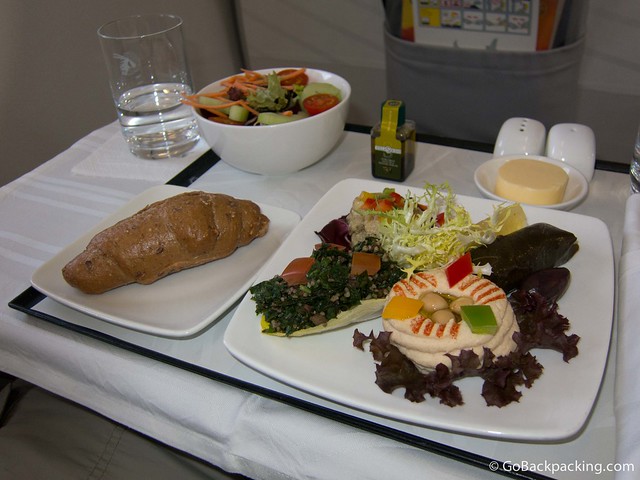 For an appetizer, I chose the classic arabic mezze

Along with the entertainment system, it was the food that I remembered best from my 2008 flights.

If I appreciated the food in economy class back then, business class blew my mind. The menus were akin to a restaurant on the ground, featuring the creations of celebrity chefs who'd designed them while taking into account the effects of eating in a dry cabin at 35,000 feet.

Every meal began with the setting of a white tablecloth. It added an elegant touch to the otherwise mundane atmosphere. A large, white cloth napkin was also provided, along with enough utensils to last a 7-course meal.

What impressed me most about the food in business class was that it not only tasted good, but that there was also so much attention given to detail and presentation.

I don't know how the chefs, stewards and stewardesses pull it off, but they deserve to be commended. 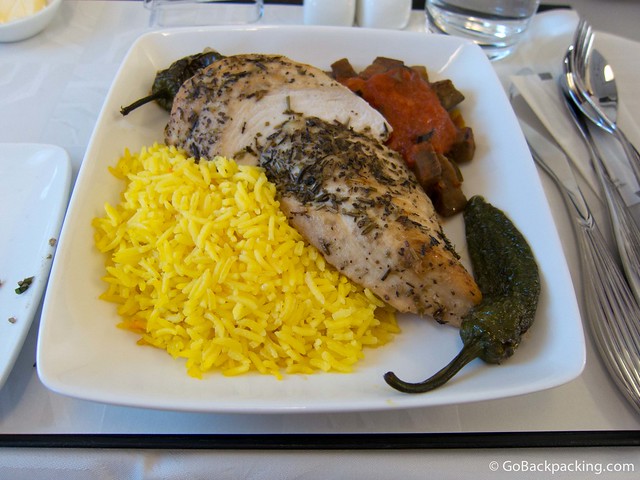 For my main course, I selected the chicken breast with arabic style mixed vegetables and saffron rice 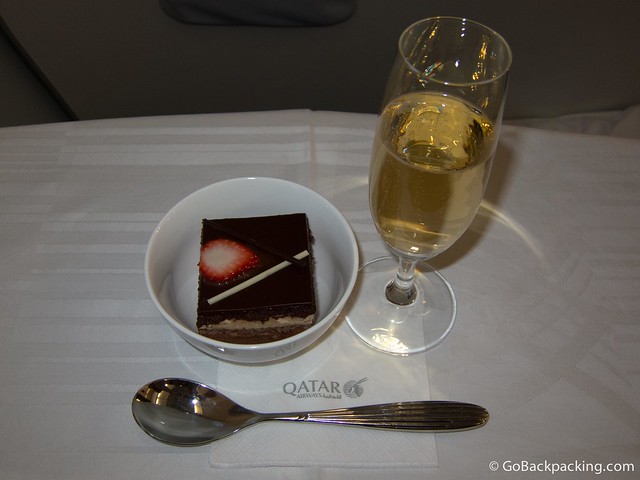 Opera cake for dessert, along with another glass of champagne

I couldn't resist another few glasses of champagne during the flight. It was a novel experience, and who knows if I'll ever have the chance again.

After dessert was served, we were presented with a box of two chocolate truffles by Godiva. Even I have my limits, and thus tucked the box away in my backpack for consumption the following day.

I didn't get any sleep on the flight from Berlin to Doha, and was in something of a semi-unconscious state when I was deposited in the main transfer terminal. 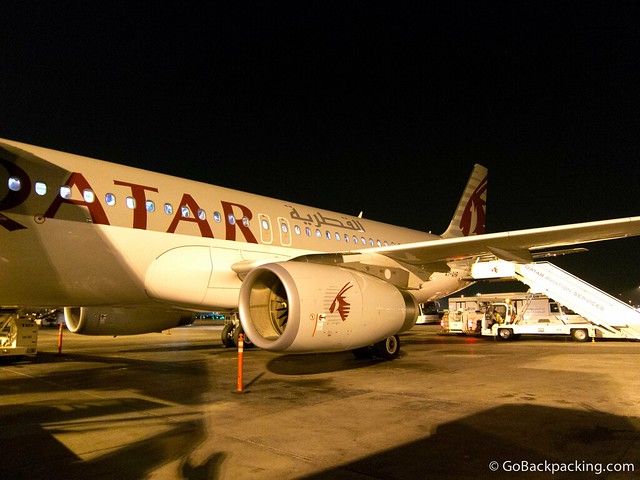 Arriving in Doha late at night

Qatar Airways operates a separate terminal specifically for premium members, but due to my last-minute upgrade, I wasn't able to make use of it.

In 2013, Doha will be opening a new airport twice the size of the current one. I imagine the services for premium members at the new airport will be outstanding.

The regular Doha transfer terminal was just as I remembered it, only this time, I was able to access a lounge with free food and drinks. 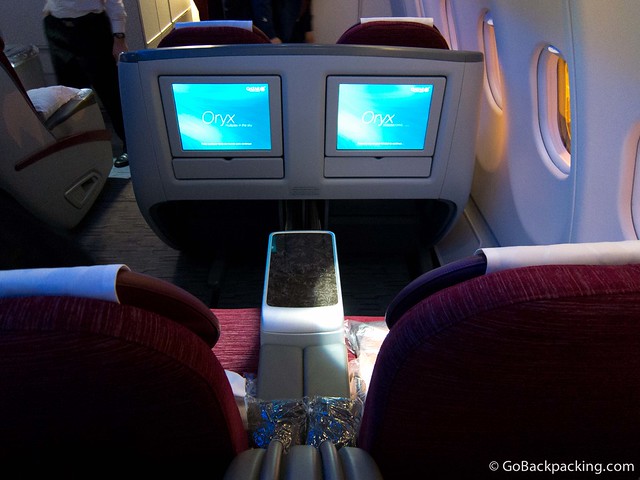 Business class seating on the Boeing 777 flight from Doha to Jakarta. The TV's were larger, and the seats fully reclined to a near-horizontal position

Two and a half hours later, I was boarding the Boeing 777 from Doha to Jakarta. This nine-hour flight necessitated a larger plane, which therefore allowed for a larger business class cabin.

The seat positions were controlled by buttons on the armrest, and included massage options. The TV's were larger on the 777, though I thought the resolution was better on the smaller screens used on the previous flight.

We received the same amenities as before, including the noise canceling headphones.

Additionally, we were given Qatar Airways pajamas. Consisting of a long sleeve shirt and thin, sweatshirt-like pants, I didn't see anyone using them, but it was nice to have the option. 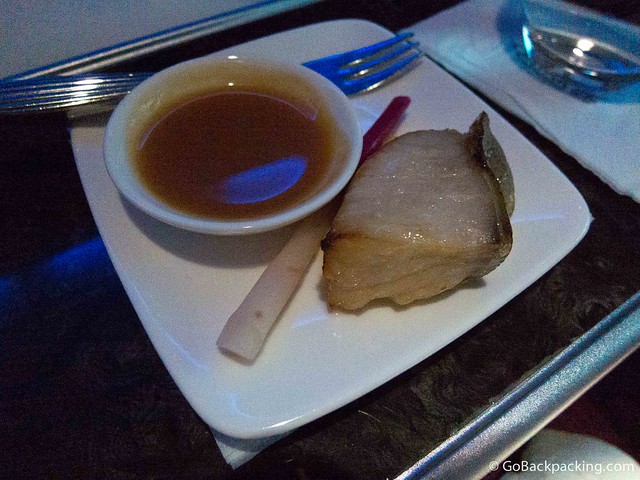 My starter on the second flight: black cod with lemon

I enjoyed another pre-flight glass of bubbly, and perused the dinner service menu.

Still full from dinner on the first flight, but wanting to continue sampling the business class food, I chose a few light options. 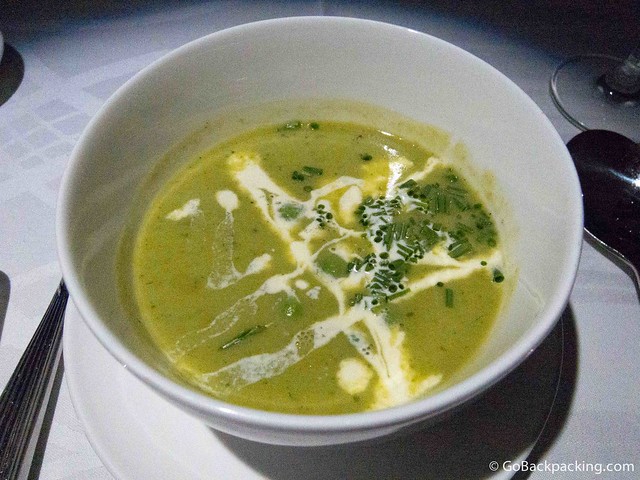 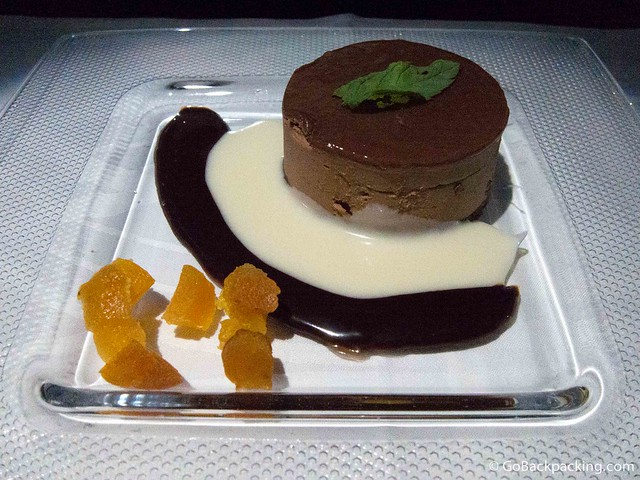 Ok, maybe chocolate mousse isn't “light” per se, but it was easily the single best dessert I've eaten at 35,000 flight.

Once the final morsels were consumed, I turned off the entertainment system, fully reclined my seat, and settled into a few hours of quality sleep.

When I woke up, breakfast was being served. Still full from my two in-flight dinners, I chose the continental breakfast, which included a croissant, bread, and a fruity marmalade presented in a glass jar.

Before I knew it, we were landing on the tarmac in Jakarta, and my Indonesian adventure was about to begin.

Whether flying business class like a rock star, or economy class (which I flew on my return flights), Qatar Airways continues to impress me with their friendly, attentive service, and commitment to high quality food.

Have you flown Qatar Airways? Share your experience in the Comments below.

My Berlin to Jakarta flights were arranged by the Ministry of Tourism and Creative Economy of Indonesia, in conjunction with a 2-week trip to the country. Thank you again to Qatar Airways for the surprise upgrade to business class.

It's nice that you were upgraded. I personally would have dressed up more appropriately ( pants and shirt) but hey.... Flight attendants is now the term used instead of stewardesses.

What did you do to earn a surprise upgrade. Did you pay any amount of money? I'll be going back to Nigeria from Delhi nextweek and I need to upgrade to business class from economy cos I'm in love with their business class.please hint me on how to go about it.

I don't know, it's still a mystery to me, but I suspect they saw me tweeting about my upcoming flight, and that I'd had a good experience flying with Qatar in the past. They didn't ask for anything in return, but I suspect they were hoping I'd share my experience via social media (which I did), and maybe even write a blog post (which as you can tell, I couldn't resist doing either).

I really like your post about Qatar. I've never flown them but you have made an excellent write-up about both the Economy flights and the Business Class flights. I might be flying with them next year and your flight assures me somewhat ''cos even though I'm well travelled I've never flown a Middle Eastern airline before!

You're welcome Victoria. Like I said in the article, I had a great time flying economy and would do so again. I'm curious to see their new airport in Doha too!

Whilst I have never flown with Quatar Airlines before,your write up has really made me enthusiastic for my forthcoming flight with them in February to the Maldives,I do have to change at Doha, and have not heard many good reports about the airport!. I am sure the flight will more than compensate for that though, even though I am booked in economy! Thanks for the article!

Stuart, the current Doha airport is fine. I've had a total of 4 layovers/transfers there, and it's well-marked and easy to get around. The hard part is being there at ridiculous hours, like 1-3 AM.

I flew back from Bali to Berlin in economy, and was perfectly fine. I did miss the champagne though :)