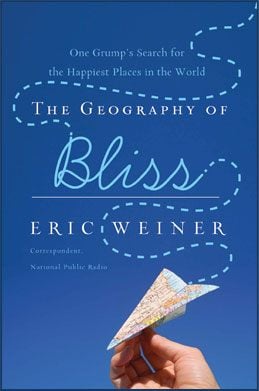 I am, for the most part, a person that looks on the bright side of things, and on a happiness scale of one to ten, a strong 8.5, maybe more. But why? How? And what is it about where I am that makes it so?

Eric Weiner attempts to answer all these questions in his book, The Geography of Bliss, a year of exploration to ten of the happiest places in the world.

During his successful career in journalism, first as a New York Times reporter, then as a foreign correspondent for NPR, he traveled to more than 30 countries, ” most of them profoundly unhappy.”? All the coverage of consequential bad news, as most news is, had taken a toll on his personal happiness. Weiner was a grump and a ” self-described mope”? and sets out with good intentions to change.

He begins in Rotterdam's World Database of Happiness. He discovers that the study of happiness, like any other scientific field of study, is not particularly warm and fuzzy, that happiness is subjective, and that some things, like happiness, are beyond measuring.

Still, from the Netherlands, a country of tolerance and freedom, Weiner visits the clean and punctual streets of Switzerland. He finds a connection between boredom and patience, patience and happiness. And that perhaps, a combination of three makes it easier ” to just be.”? He then goes to Bhutan, a real life Shangri-La, a place where other expats warn, ” If you stay here long enough, you lose touch with reality.”? But maybe warning is not the right word to describe it, for the simplicity of life in Bhutan brings him peace, as he falls deeper into the trance of a country that prioritizes Gross National Happiness. From there Weiner spends time in Qatar, Iceland, Moldova, Thailand, Great Britain, India, and wraps it all up in his home country of the United States.

Although an optimistic nation, the U.S. is nowhere near the happiest. ” We are able to acquire many of the things that we think will make us happy and therefore suffer the confusion and disappointment when they do not.”? Our lives, for the most part are led too quickly, too focused, and with too much room for improvement, (something better, something bigger). There is not enough for human connection and contentment.

In the end, he concludes that, ” Money matters, but less than we think and not in the way that we think. Family is important. So are friends. Envy is toxic. So is excessive thinking. Beaches are optional. Trust is not. Neither is gratitude.”? A conclusion and yet there is not even an inkling of a definitive answer.

The reader, however, is hardly left confused, let alone unfulfilled. Weiner's writing is charming, enlightening, and funny. In my experience he sometimes evoked moments of embarrassment as I literally laughed out loud while reading in my favorite cafe.

Furthermore, he is not merely traveling to find any answers. He uses his journalistic talents to meet and spend time with so-called happiness experts as well as lifelong residents, global nomads and country leaders. His interviews are in-depth and casual and reveal more about the study of happiness in some ways than most scientific studies. The beauty of Weiner's travelogue, however, is that he also weaves this science throughout, providing proof and well-research insight into his personal findings.

He experiences the cultures just as the reader does, with a fresh yet critical perspective. It is impossible to truly encompass one people, one life, one country in a single book let alone a single chapter and yet his participatory lifestyle provides a satisfying dip.

Weiner is a wonderful companion and leader on a journey that has the power to take you simultaneously around the world and within the complete being of yourself. If there's one thing to take away from The Geography of Bliss, it is to ” allow these places [that Weiner explores] to move us.”? And of course, to smile more.

In the comforting words of one of the leading happiness researchers, Jon Helliwell, ” It's simple. There's more than one path to happiness.”?

Where will it lead you?