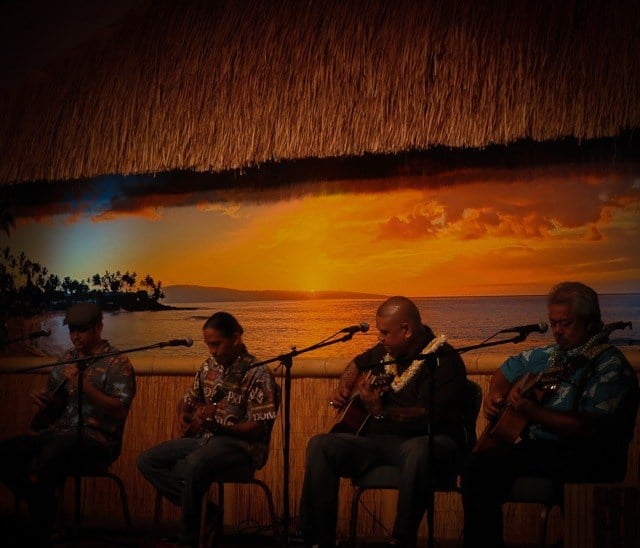 [L]ike all cultures, music is vital to Hawaiian expression and identity.

Most mainlanders associate the ukulele as the chosen instrument of the islands, but for over 150 years, Hawaiians have been playing a guitar of their own.

These musicians created a new method commonly referred to as “Slack Key” that's unique and relaxed, just like the Hawaiian spirit.

In the early 19th century, Mexican cowboys introduced Islanders to the guitar, and the native Hawaiians invented a new style known as ki ho‘alu, which literally means “Loosen the [tuning] key”.

Of course, this new style means a completely new way of playing, and fortunately the Napili Kai Beach Resort has been the home to George Kahumoku Jr, one of the world's masters of slack-key playing, for the past few years.

They call it the Slack Key Show – Masters of Hawaiian Music.

You enter the Aloha pavilion at the Napili Kai Beach Resort in Lahaina, with a tropical theme and the palm tree-lined beach a short distance below. 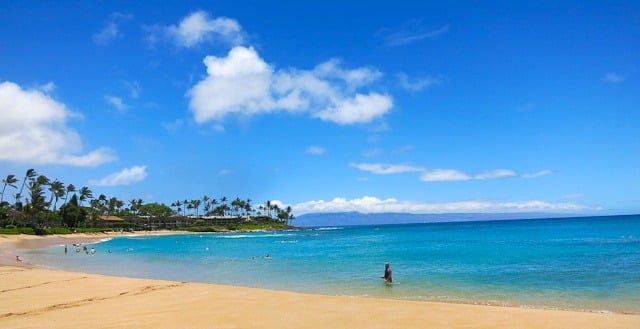 George Kahumoku, Jr. is the original star and clearly a mentor to the other slack key guitar musicians.

From the moment George takes the stage, on thing is clear: This is the house of George. It's his home, and you will never see anyone more at ease on stage.

True to his roots, he constantly gives back to the island community, teaching music and art at local community colleges and high schools.

He's also well-known on the island for bringing fresh produce from his farm everywhere he goes to share with his friends and neighbors. The people in the audience may know this, or they may not.

The just know that George Kahumoku, Jr is one of the most chill human beings.

His music relaxes and calms the nerves better than any massage, and in between songs, he tells jokes and stories about growing up on the islands.

He's probably told these same tales every single night for years, but tonight he is just as wide-eyed and refreshed as if this was the first time, like these stories had just happened.

Of course, the show isn't entire about George Kahumoku. He serves as the emcee, introducing a constantly rotating lineup of performers and luau dancers, most of which collaborate with George during his Grammy-winning albums.

These  guest artists include fellow slack key players, Ukulele masters, Vocalists, and Steel Guitarists. Each of these people has their own following, and they're all just as talented and interesting as George.

Peter deAquino of Da Ukulele Boyz is hilarious, but my personal favorite is Sean Na’auao with his distinct tribal forearm tattoos and stand out voice. I suggest you listen to him while I continue wondering what the tattoos mean.

As you sip on Mai Tais, you will experience that feeling known only as Hawaiian Hospitality, realizing that this is more than just a show, not just your average weekday entertainment: George Kahumoku is opening his home to you, inviting you in, and making you his honored guest.

So stay a while. Dude's got some great stories.

My trip to Maui was provided in collaboration with Maui, the Magic Isle. Opinions expressed above are my own.

Aloha Jason Batasky 7-2-15 Thanks for your great review of our show! Please come visit our farm too, next time you are in town Uncle George 808-280-9948 Mahalo Nui loa