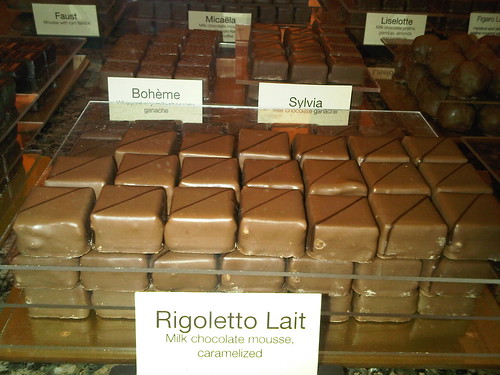 My chocolate habit spiraled out of control on my trip around the world.  Once I landed in New Zealand and saw convenience store racks loaded with giant bricks of Cadbury chocolate, it was over.  I traveled around the country with a pound of the stuff constantly in my pack, telling myself it's an important supply of energy for all the hiking and physical activity I was doing (yea right).

In Sydney, my Couchsurfing host took me to the Lindt chocolate cafe where we ordered the most decadent hot chocolate known to mankind, and on top of that, picked out a few extra truffles for good measure.

In the Laotian capital, I had a 3-course meal which ended with chocolate oozing out of a warm cake.

And taking quick jaunts through Belgium and Switzerland last winter was no accident either.  I'd heard the best chocolates came from those two countries, and I was determined to put such assertions to the test.  I sampled chocolates from several shops in each country.  They were certainly delicious, but…

Nothing in my 33 years on this planet we call Earth can compare to the 5 delicate, decadent chocolates I hand-picked from the Parisian boutique known as La Maison du Chocolat at Rockefeller Center in New York City.

At $1.95 apiece, these small delights were not cheap, but they were beyond worth it.  I wish I had written down the flavors I purchased so I could riddle them off for you, gushing about how amazing each of them was.  While they managed to last an hour or two of sightseeing, once I returned to my brother's apartment downtown, I opened the unassuming plastic bag and ate the first one.

Any food item which has the power to send chills up your spine, and make the hair on your arms stand on end, deserves extra attention.  I proceeded to enjoy the remaining 4 chocolates in timed intervals.  30 minutes later, they were gone.

And that's an achievement for this chocoholic.