Andre, a structural engineer by trade, and a German by birth, was the first couchsurfer I had the opportunity to host. He contacted me about 6 weeks ago as he was planning to fly down from Boston (where he's a Research Associate) to attend a friend's wedding in Leesburg, VA.

After reading his introdoctury e-mail, I checked out his CS profile which was full of positive references. I responded back that I was free to host him, and we exchanged a few additional e-mails to work out the details around arrival time and directions to my apartment. 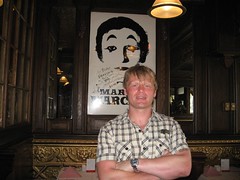 I had mentioned to Andre in advance that I would be attending a happy hour with coworkers the night he planned to arrive, and he suggested there was no need for me to leave it early just to meet him. As it turned out, I was ready to leave by the time he was on his way to Arlington from Dulles Airport (via bus and metro). I was back at my apartment when there was a knock upon the door. I opened it up and saw an imposing figure with a big smile.

Once inside the apartment, he unzipped his day pack to reveal a 6-pack of Heineken for the host. It seems great minds think alike as I had previously picked up a 6-pack of Warsteiner, a German beer, to ensure my guest had a little reminder of home. I opened a couple of beers and we got to know each other better. I was a little self-conscious about the fact that I only had a space on the floor available, however when I offered up my down comforter and a few pillows, Andre seemed completely content, and we got some zzzz's.

I was working a 1-10pm shift for a coworker on Friday, so in the morning, we walked a few blocks to my favorite coffeehouse, Murky Coffee. Andre had specifically indicated he wanted a ceramic cup (as we established paper “to go” cups are decidedly non-European), so he was a little miffed when his American coffee came in a giant paper cup. We gobbled down some pastries, and I pointed him east toward The Mall in Washington, DC, which he walked to as the morning sun began to beat down (it got into the upper 90's by afternoon).

Later that night, I arrived back at the apartment to find Andre enjoying the air conditioning after he experienced the full force of a hot, humid Washington summer day. I had given him a key to my apartment so he could have a little more freedom. I think he was a little surprised by the offer at first, however I shared my attitude toward believing the best in people, and practical approach toward fostering a non-materialistic lifestyle.

We met up with my friend Jason, and walked a few blocks to Clarendon, a small town with a popular nightlife near my apartment. As it was late, we were limited in our restaurant choices, and settled on Hard Times (chili) which allowed us to sit outside and watch the drunk people walk to and from the bars. After a few beers, some food, and laughs, we called it a night.

I drove my guest to a local Macy's so he could pick up a new tie for his friend's wedding. Clothes shopping was not his forte, however we accomplished the mission, and then grabbed coffee and a bite to eat at Panera Bread, before I drove him to the bus stop so he could head west to Leesburg for the night. 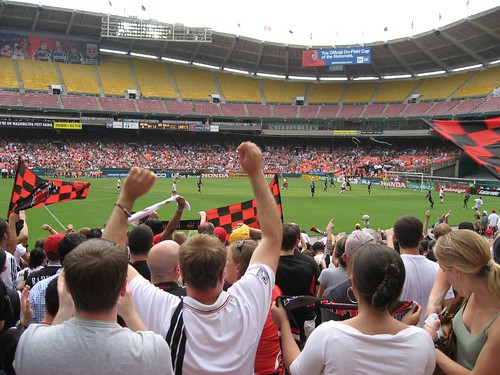 Since Andre's flight didn't depart until 9pm'ish, I had invited him to a DC United (vs. NYC Red Bulls) soccer match at 1pm. I picked him up at the bus stop and we sped through the cit, arriving at RFK's parking lot in time to get some free grub from the Barra Brava (fan club) tailgate.

And then it was on to the game, where I sat in the Barra Brava section for the first time. We didn't watch the game together, as Andre needed a little distance from the beating drums and chanting hordes. DC United kicked butt, winning 4-2, and we headed back to the car. Given we had some time to kill, I suggested we check out Georgetown. We stopped in Bistro Francais where we ordered some light food, and more coffee. Then it was off for some lounging in the grass by the waterfront (of the Potomac River), before I dropped Andre off at the bus stop for the last time.

I will reflect more on my experience, and share some tips for guests and hosts in my next post.