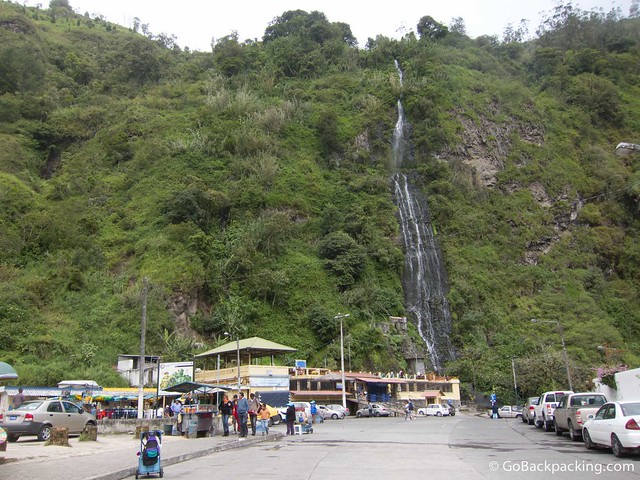 The hot springs at the base of Cascada de la Virgen

Banos is the undisputed adventure capital of Ecuador. This tiny pueblo sits at the base of the looming Tungurahua Volcano, along a river, and amidst gorgeous green mountains.

Visitors to Banos will quickly find a wealth of outdoor activities at budget-friendly prices.

The hardest decision you'll have to make is which activity to do first. And to help in that department, here are five ways to get wet and wild in Banos. 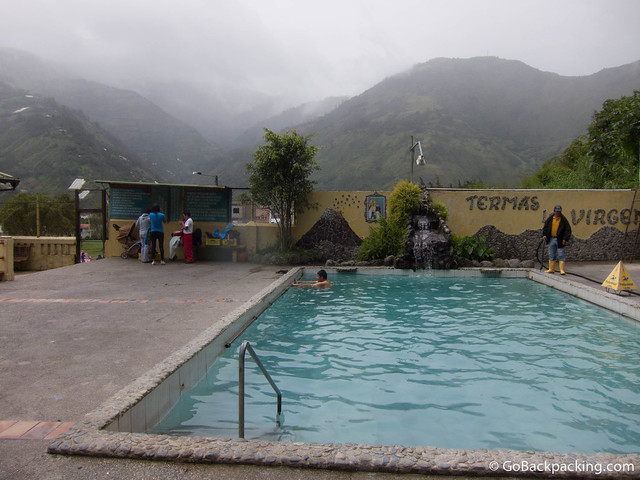 5. Bathe in the Hot Springs

Banos gets its name from the naturally-occurring thermal waters.

Many believe the mineral-rich water to have healing properties, however, during my visit to the pools at the base of Cascada de la Virgen, it felt more like a public pool in Summer.

On a weekday afternoon, I paid the $2 entrance fee and $1 towel rental for the privilege of being surrounded by dozens of Ecuadorian kids, couples, and families excited to be on vacation.

While hard for me to believe, it's supposed to be even more crowded in the evenings, especially Friday and Saturday nights.

Local Tip: El Salado is a newer hot spring complex located along a mountain stream a short taxi ride from the city center. Locals suggest you visit at 5 AM to enjoy the warm waters without the crowds. 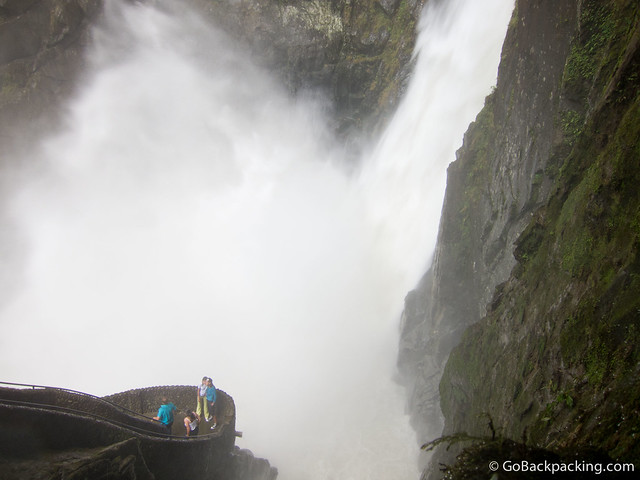 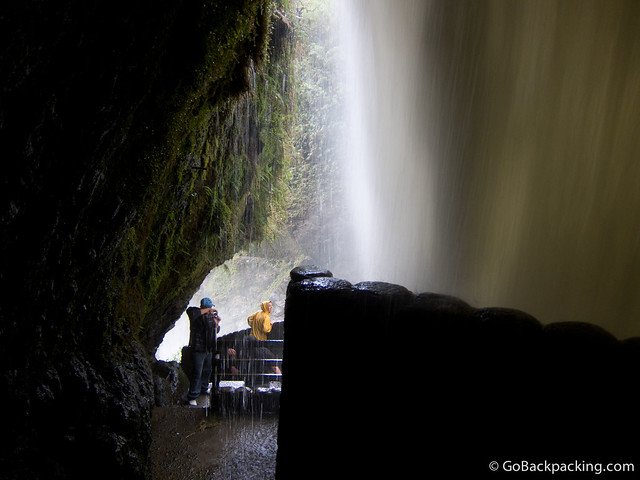 Traveling the Ruta de las Cascadas (Route of Waterfalls) is the most popular activity in Banos.

There are many ways to make the trip, including by bicycle, ATV, go-kart, and this author's preferred method — double-decker bus ($6).

The most impressive waterfall on the route is Pailon del Diablo (Devil's Cauldron). It's about a 20-minute hike along a forest trail to reach the viewing platform of the waterfall.

If you want your picture taken directly in front of the falls, you're going to get drenched. Apparently quite a few Ecuadorians knew this because they were wearing bathing suits for their photos.

I wanted to get close, but not soaked, so I climbed up a slippery rock path that goes behind the falls. Thankfully I had a rain jacket, but I still got really wet.

It was worth it to stand behind such a powerful torrent of water thundering down from above. 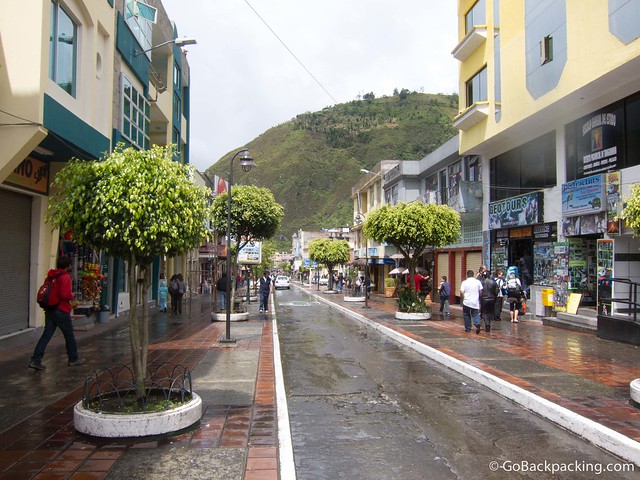 3. Visit in the Rainy Season

File this entry under the “wet” side of this story.

I arrived in Banos at the start of the rainy season and had to make do with a day and a half of sunshine and blue skies out of nine days in town.

Luckily, most of the activities in the region go on rain or shine, as chances are you'd get wet from a river or waterfall anyways! 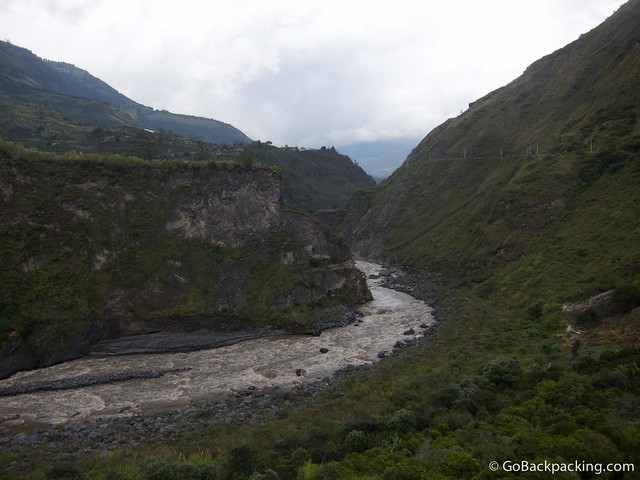 The river running through Banos

Banos is a great place to go whitewater rafting, especially for beginners. The close proximity to the Pastaza River means rafting trips can be done as half days.

Rapids vary from Class II-IV, depending on the amount of rainfall and water levels.

Ant and Elise from Positive World Travel arrived in Banos soon after I had left, and they said they had a great time rafting there. It was Elise's first time too.

1.  Abseil a Series of Waterfalls (Canyoning)

I first went canyoning in New Zealand over three years ago at the start of my round the world trip, and it was a blast.  I'd been looking for an opportune time to go again ever since.

When I learned there was canyoning in Banos through Jack and Jill's travel blog, I knew it'd be atop my to-do list.

However, I put off canyoning until the end of my stay, and then I made the mistake of leaving my name with just one tour office (Geotours), instead of checking around. I almost missed the chance to go as they required a minimum of two people.

Luckily, Henry from Hostel Erupcion arranged for me to go with another company's guide. In effect, I was getting a private trip, but it'd be sans photos from the guide and bag lunch.

The entrance to Rio Blanco's waterfalls is a short 15-minute drive out of Banos, followed by a 20-minute hike to the first cascade.

A good warm-up for the bigger ones to come. As I was standing on slippery rocks, waiting for my guide to hook up the ropes, I wondered what the hell I'd gotten myself into.

Once roped in, he gave me guidance for how best to navigate the first cascade, which was short, but a little bit more technical in nature.

And over the edge, I went.

And then I was down, carabiner unlatched and watching the guide scuttle down the slippery rocks to the left of the waterfall.

I looked at my dominant right hand, the one used to feed the rope and control my abseil, and noticed blood.

I asked the guide if he had any gloves…

He responded to my befuddled look by suggesting I had “sensitive hands.”

I ignored the pain, too excited to be playing Bear Grylls in the mountains of Ecuador.

More than twice as tall as the first, but easier because the water was falling to the left, and the rock face was almost vertical.

I made it down faster, but I now had rope burns on three of my fingers, and the stinging pain was more acute.

I rinsed my hand in the cool water while I waited for the guide to set up the ropes again.

I could no longer fully grip the rope with my right hand, so I abseiled the third and largest waterfall by also using my left hand to feed the rope through the harness.

It was a jerkier descent, but I didn't have a choice.

Despite the pain, the third waterfall was my favorite, as it was a sheer drop, and therefore the easiest to get down.

After we exited the river, we were treated to some home cooking from the woman whose home was located near the pick-up point for our ride back to Banos.

Warm rice and veggies cooked on an open, wood fire beats a bagged lunch any day.