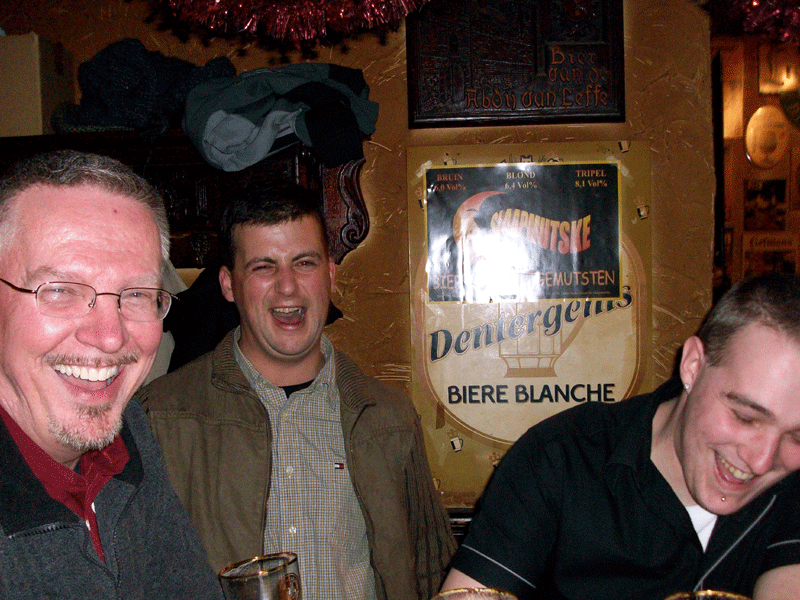 Almost all of my American friends I made while studying abroad were majoring in international relations. At Syracuse University, like most others, it is a broad field, incorporating law, organizations, security, diplomacy, political economy, and international communication in each geographic region of the world.

As a a magazine journalism and modern foreign language major, I was certainly the odd one out in the academic sense. I'll admit that I'd never taken an economics class and was somewhat ignorant on specific political histories, but in my 10 months outside of the country, I was exposed to all of this knowledge and more.

You see, there was one thing that I and every single other American student had in common, our cultural baggage. No matter how aware we were (or weren't), we each carried a collection of values, beliefs, concepts and behaviors. They were uniquely developed within us as children in our respective homes, and yet all the while in our shared home country. And it was at their mercy that we experienced the world.

The first step to cultural understanding is a simple recognition of this perspective within yourself and within each and every other person you meet. Overall cultural themes can be summarized, in fact, by one simple question, the one that is asked immediately upon meeting someone new.

In the United States that question is most often, “What do you do?” Us Americans live in an individualistic, capitalistic society, and thus, we are defined by our jobs or careers. It is a central part of our identity, and it is a double-edged sword.

Struggling for time and balance we have come to depend on efficiency and convenience. As I touched on in my review of The Geography of Bliss, for as positive as this constant motivation to be and do better is, it can also negatively affect our relationships, our happiness and our health.

In Ecuador I often was asked, “Are you married?” For the most part, it wasn't a rude or even flirtatious inquisition, just a way to get to know me better as family plays a prominent role in most Latin American cultures.

Living in Santiago, Chile, however, I was met with “Where do you live? and “Where do you go to school?” by numerous twenty-somethings. The first one can be attributed to the fact that my address is powerful enough to dictate my economic status. While Dictator Pinochet was in power, he organized the city's neighborhoods in such a way that the upper class, middle class, and lower class were clearly defined and segregated within their area. It is often still like that to this day and according to my host mom, the prejudices that have been born from it can reach as far as to affect the hiring process.

The other, is a little less devastating. In Santiago, like most places outside of the US, children, teenagers, and young adults live at home while they study. They go through the education system with the same classmates and groups of friends, often until college graduation. Thus, not only is it difficult for outsiders to integrate themselves into deeply-rooted friendships but it also, as a stereotype, says a lot about their political stance. If you were wondering, the public U. de Chile is considered liberal, while the also public yet religiously-affiliated U. CathÃ³lica is conservative and upper crust. Interesting stuff.

Somewhat less telling were the first questions I was asked in France and throughout my European travels, “Where are you from?” To non-native speakers it was nearly impossible to differentiate whether I was British, Australian, Irish or American among others.

Furthermore, in countries in which I could communicate (Spanish/French-speaking) locals could only reach the point of being sure that I was not from their respective country. To them, I could've been from “anywhere but here.” And that was especially flattering for a foreign speaker like me :).

I am certainly not a social anthropologist, nor do I support generalizations of any form, but I do find it absolutely fascinating how far that Q & A period, at the earliest point of first impressions, can reach into our own cultural core.

I was doing Computer Science for awhile but gave that up and going into International Relations. Seems to suite me better since I started traveling. :)Wonderful article and got me thinking.

I was doing Computer Science for awhile but gave that up and going into International Relations. Seems to suite me better since I started traveling. :)Wonderful article and got me thinking.

I haven't been to DC in too long, sounds nice. I'm sure it has though, it takes people not majors to make a trip worthwhile :)

You should try coming to DC, it seems like everyone here was a politics or international relations major. Nonetheless I think my English degree (which I chose because of my curiousity and love of hearing other people's stories) has suited my travels pretty well.