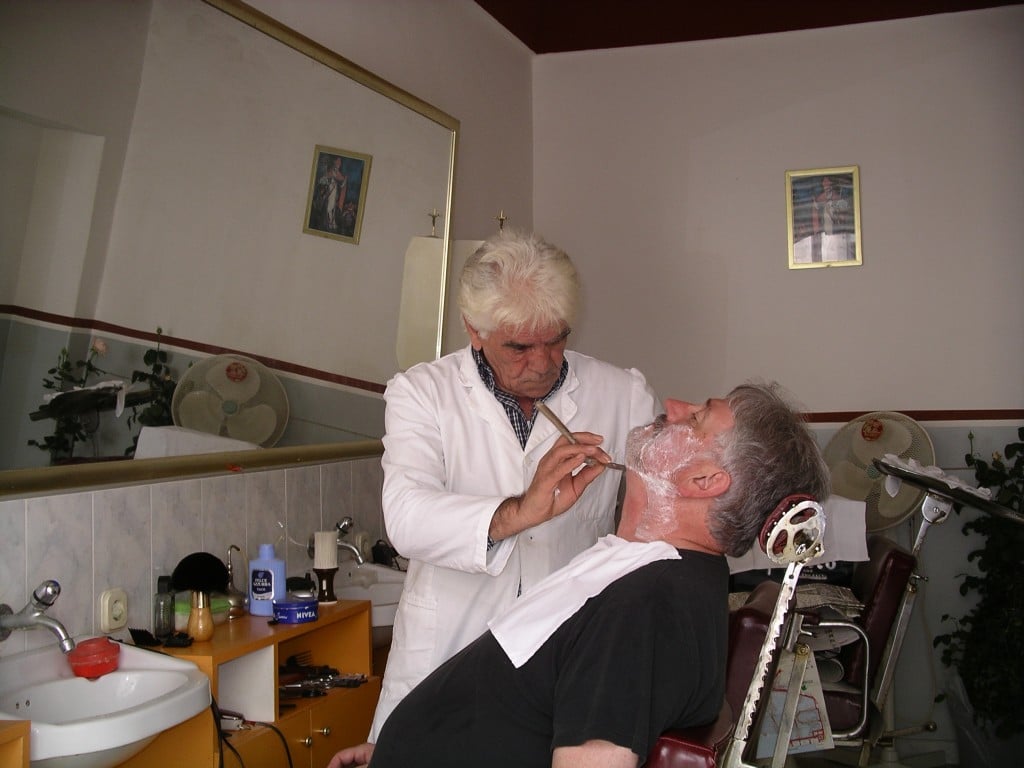 To fully experience travel, you frequently have to trust in strangers. This barber seemed to be in a bad mood, however, so I decided not to discuss Balkan politics with him.

Jerry V. Haines is a travel writer from northern Virginia.

We met back in 2007 when I took his one-day travel writing workshop.

I was curious to see how the landscape of travel writing is changing from his perspective, so I invited him to answer a few questions on the subject.

Go Backpacking: In which publication was your travel writing first published, and what was the story about?

Jerry Haines: The Washington Post, in the Wednesday Style section “Escapes” column in 1996.

It was a piece, submitted “on spec,” describing a quiet afternoon in St. Georges, Granada.

But the narrative began with our being directed to the wrong church that morning, leading to one of those glorious people-to-people experiences that I've tried to feature in subsequent writings, whenever we've been fortunate to have such happy accidents.

GB: Since then, where has your work appeared?

JH: I have been blessed to have had wonderful relationships with the editorial staffs of several newspaper travel sections: The Washington Post, The Los Angeles Times, The Newark Star-Ledger, The Dallas Morning News, and The St. Petersburg Times, among others.

They ran my stuff, paid me on time and didn't mess (too much) with my copy.

I found some good friends there and remain in touch with many of them, even though they're no longer in a position to buy anything from me.

I also ran a few things in Catholic Digest. I'm just now dipping my toe into internet waters and have done some things for World Hum, Intelligent Travel and Travel Beat.

I haven't started my own blog, but occasionally I think about it.

(On this subject, I may be slow on the pickup, but not as bad as my edition of MS Word, which just flagged “blog” as a misspelling.)

GB: In the last 5 years, how has travel writing in traditional media changed?

JH: Well, one obvious answer is that newspaper travel sections “assuming they even exist anymore” are not buying much freelance.

Editors have taken buyouts as their sections shrank or got folded into other sections of the paper.

Those that remain often use syndicated material or pieces written by full-time staff of other sections of their papers.

Many still do buy an occasional article but restrict their purchases to stories about travel within their respective reading areas “trips on a tankful,” etc.

And the internet hasn't taken up the slack.  But I'm optimistic that eventually, it will.

GB: How does writing for newspapers and magazines differ from writing for online publications and blogs?

JH: In one sense, good writing is good writing. But the internet reader has to be courted much more aggressively than his print counterpart.

You have to show your goodies early, or he'll quickly click away.

(But wasn't that also the case before?  If you were pitching to a newspaper editor, you had to make your “sale” in the lede.)

You have to make some concessions to the medium.

Stories, paragraphs, and sentences are shorter because a screen just isn't as readable as a paper page.

And you have to make concessions to our ever-shortening attention spans, a phenomenon that predates the internet.

Personally, I blame television and vid Oh, look! A squirrel!

In the new world, you also have less editorial backup.  You can't just assume somebody will catch your misspellings and factual errors and fix them for you.

(But really, now. You never should have made such assumptions in the old world, either.)

The good part is that there are fewer people looking over your shoulder, second-guessing your word choices and imposing their own style.

We're also all learning that some of the most important readers are not human, they're search engines.

And, if we want hits, we have to learn to think like them, I guess, filling our NAKED paragraphs NAKED with NAKED words NAKED they're likely to NAKED seek. TOTALLY NUDE!

One other thought:  I love to write travel essays, but, except for the Washington Post, very few newspaper travel editors published essays, dismissing the whole genre as self-indulgent and ego-driven.

But what could be a better medium for essays than the internet, the epitome of self-indulgence?

The future of the printed word, whether in newspapers, magazines or books, seems in question these days.

Ebooks are growing in popularity, as are the specific devices on which to read them such as Amazon's Kindle.

How does this trend benefit writers, and are there any hidden downsides?

I am absolutely the worst person to comment on that, as I love the traditional, ink on paper book.

As my wife will confirm, I hardly ever get rid of books, even ones I hated. They sit on my shelf (actually, “shelves,” dozens of them) as their own monuments to the labor, and celebrations of the thrills, of reading them.

I admire the inventiveness that produced the Kindle, and I suspect it will benefit all writers by making writing more accessible to more people, but I probably will never own one.

Unless someone wants give me one. Actually, I'd rather have a sweater. (I'm an XL.)

GB: What is your #1 piece of advice for readers interested in pursuing freelance travel writing opportunities, whether in print or online?

JH: Be persistent. I was rejected by 30 different newspapers before I thought of trying the Post (it was sort of a personal Hail Mary play, based only on the fact that it was the paper I knew best).

Don't be discouraged by rejection; there are lots of reasons why someone might not choose to publish your writing, and most of them have nothing to do with the quality of your work or your value as a human being.

There's no reason to get derailed by it, particularly now that we no longer have to shlep printed manuscripts to the post office, accompanied by a self-addressed, stamped envelope.

(How I hated those things. Newspapers used them only for rejections; if they liked your article they'd call you. The SASE always meant bad news.)

Today, if you get rejected, just send out another email.

GB: And finally, if you could wake up anywhere in the world tomorrow morning, where would it be?

JH: I'm often asked that (or variations on it) and I usually respond with wherever I've been most recently (which currently is Charleston, SC).  But ultimately, it has to be Italy.

I particularly like the smaller, lesser-known cities like Bologna, Bassano del Grappa, Cagliari, Sorrento, Padua.  (Shall I go on?)

Your internet site is certainly full of remarkable details and info and likewise is actually really enjoyable to learn through.Properly completed:)

I was so annoyed beacuse I couldn`t resolve this situation. Then I observed your website in google and problem is solved. Many thanks!