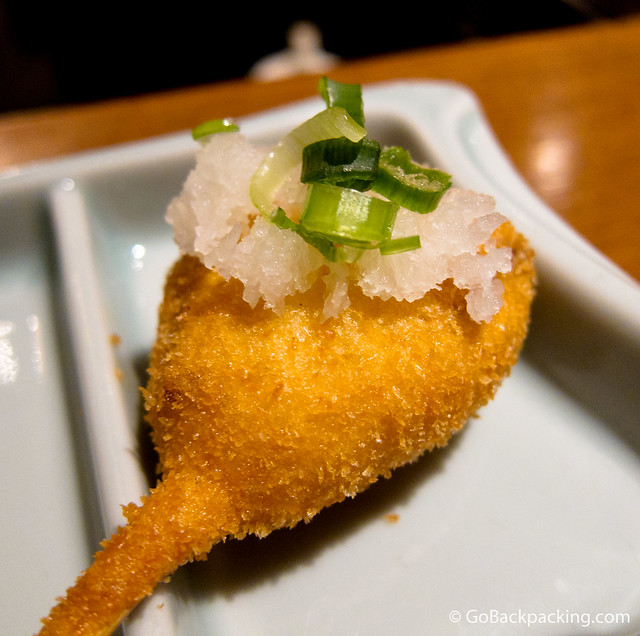 Kushikatsu is a popular and traditional Japanese dish comprised of battered and deep fried foods (“katsu”) served on skewers (“kushi”).

I stumbled across a restaurant, Copain, that specializes in Kushikatsu in Kyoto while I was walking along the same alley where I enjoyed the best sushi of my life the night before. 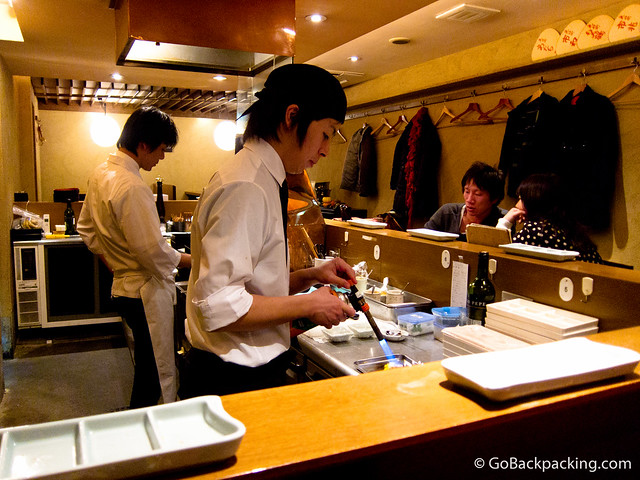 Inside the restaurant, with the near chef searing something delicious no doubt.

After taking a peek inside to make sure there were other people dining there, I walked in and took a seat at the counter facing the kitchen.

I was becoming accustomed to sitting in front of the chefs while they work in their open kitchens, and I kind of liked it, especially since I was mostly eating alone during my time in Japan.

The total cost for this option was 3,150 Yen ($38), and I had a feeling it'd be money well spent to discover a new style of Japanese cuisine.

Before we got started, I also ordered a Suntory draft beer.

The chef nearest to me presented a plate with chopsticks and four dipping sauces.

Each time a course would be given, the chef would advise me which sauce would compliment it best.

[Editor's Note: Unfortunately, I lost my detailed notes of the ingredients comprising each course, so I can only offer a general recollection.] 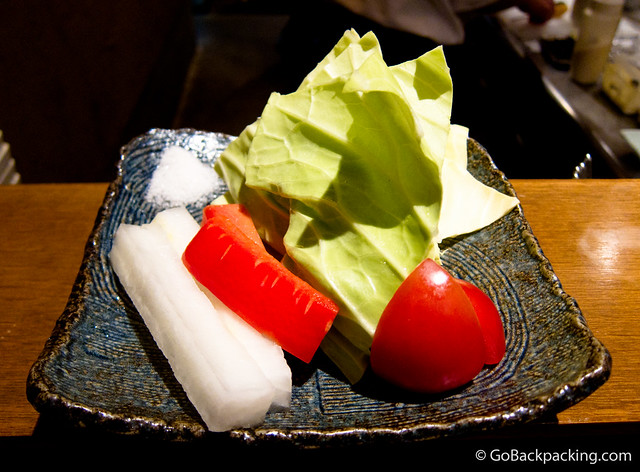 Course 3 was a simple salad.

The first course was a glass of tea, which was followed by a giant prawn, and a simple yet colorful salad of cabbage and tomatoes.

This was followed by 5 Kushikatsu featuring various ingredients.

The central element was deep-fried, however, there was almost always a sauce or secondary element on top as well, plus the various dipping sauces.

You might think a 12-course meal of deep fried food bits is a little unhealthy, however, the sign outside the restaurant explaining the cuisine also indicated that they have a healthier house batter in use.

I remember it tasting light, for whatever that was worth to my cardio system at the time. 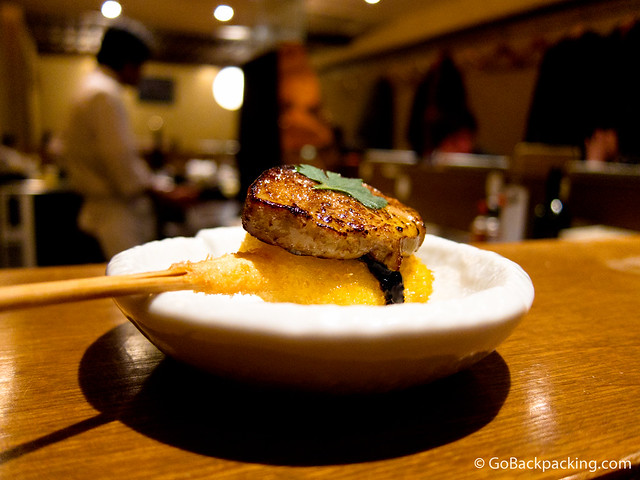 Upon finishing my last course, I noticed a guy across the counter from me was being served up an exceptionally good-looking course.

I asked the chef about it, and he said it was a [blank] topped with foie gras.

I knew I had to have it, and ordered one for myself.

It turned out to be one of the most picturesque courses, as well as one of my favorites from a flavor perspective.

To see photos of every course, watch the slideshow below. Bon appetite!

Yum! This meal looks incredible - I think I'm looking forward to the food in Japan more than anything else

Glad you enjoyed the food photos. I knew I was going to enjoy sushi in Japan, but there were so many other foods I discovered as well. I've got one more multi-course meal from Kyoto which I'll share in the next few weeks!