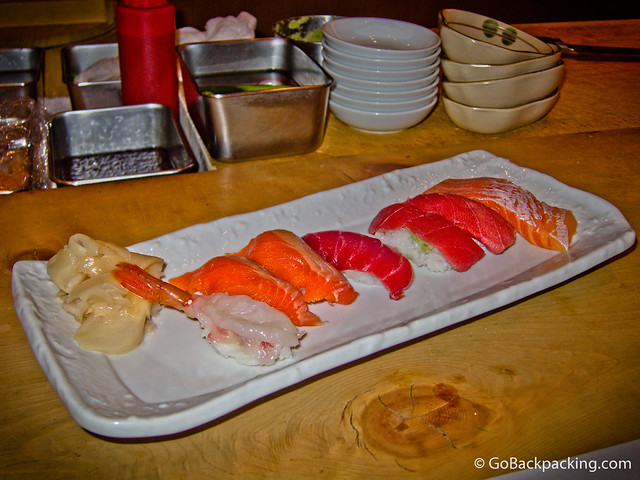 I had the best sushi of my life in Kyoto.

The hostel had given me a map with a variety of restaurants, and when I couldn't find the cheap sushi place my first night, I randomly wandered into Sushi Masa.

The restaurant's first floor had a narrow rectangular layout, with a long wooden sushi bar running its length. A few locals were at the far end, next to a fish tank that acted as a wall between the dining area and the kitchen.

I pulled up a seat in the center of the sushi bar, right in front of the chef's workstation.

The menu felt limited, however I soon found out that didn't matter.  The quality of seafood on offer mattered more than the variety.

I ordered a bottle of hot sake, and a few familiar friends, including prawn, salmon, salmon belly, tuna, and tuna belly.

The chef went to work in front of me, and he wasn't shy about his use of wasabi to bind the fish with the rice.

The prawn was fine, as was the salmon and tuna. I don't tend to enjoy fatty tuna as much as normal tuna, though I continue to order it because it's suppose to be better.  But on this night, the salmon belly was the nigiri to win my belly over.

Decadent would be an understatement.  It melted blissfully in my mouth.

I ordered more, along with live tiger prawn. I had a feeling I knew what that “live” moniker meant, and sure enough, the chef fished a living tiger prawn out of the tank at the end of the bar, and promptly chopped its head off, cleaned it, and dropped it on the plate in front of me atop a ball of rice.

I branched out, ordering a piece of cuttlefish, but the texture was tough, and I prefer soft and silky.

A few other Kyoto locals shuffled into the restaurant and took up residence to my right.  They ordered a lot of food, and kept the chef busy, which I appreciated since it slowed down my consumption of more salmon belly.

The sake was starting to kick in, though I didn't realize it at the time.  I continued to watch the chef meticuously prepare plates of sashimi for the new arrivals. 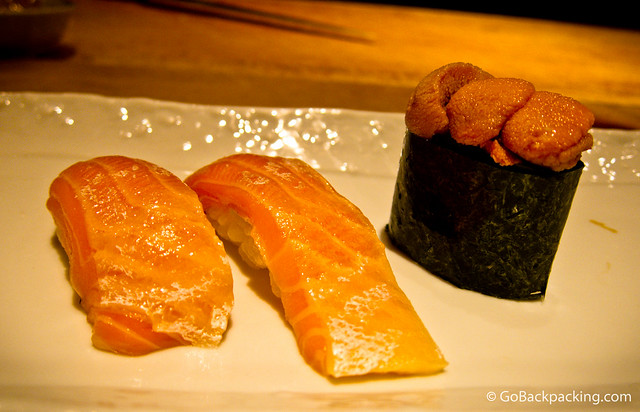 I could've kept eating, but it was my first night in town, and I knew many more amazing meals awaited me and my wallet. The total bill was no more than $50, and well worth it for the best sushi I've had to date.

I'd return a second time, and try the sea urchin, which I normally wouldn't order.  It was another melt-in-my-mouth experience.  It was also the most expensive item on the menu at 630 Yen per piece ($7.60). 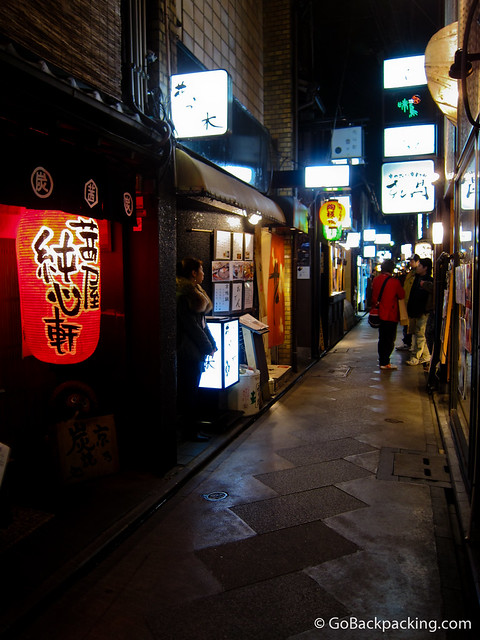 Ponto-Cho Street is a narrow alley lined with restaurants that runs parallel to the Kamo River.

I stepped into Winter's cold grip outside, and immediately heard salsa music playing from a speaker 10 meters to my left.  Following the music, I descended into El Coyote, a basement-level Latin bar, to continue my foray into the Kyoto nightlife scene.

I ordered a beer, stunned to be back in the familiar environment of a salsa bar, yet halfway around the world in Kyoto, Japan. 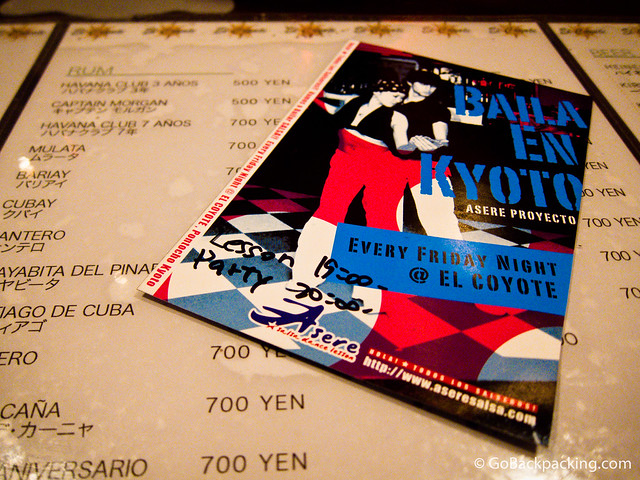 Flyer for salsa dancing in El Coyote bar in Kyoto.

There were other foreign guys in the bar, dancing occasionally with the Japanese women they were with.  I chose to wait for the opportunity to dance with the bartender, which was fun.  One good dance under my belt, I quit while I was ahead and walked back to the hostel.

As far as first nights in new cities go, I couldn't have been happier to be in Kyoto.

Oh that sounds fantastic, I can't wait to visit Japan. Thanks for the awesome pictures.

My mouth was watering a the description of that freshly slice fish and that live tiger prawn! I was happy to read that the chef used wasabi generously, I'm a huge fan of that burning nostril sensation!