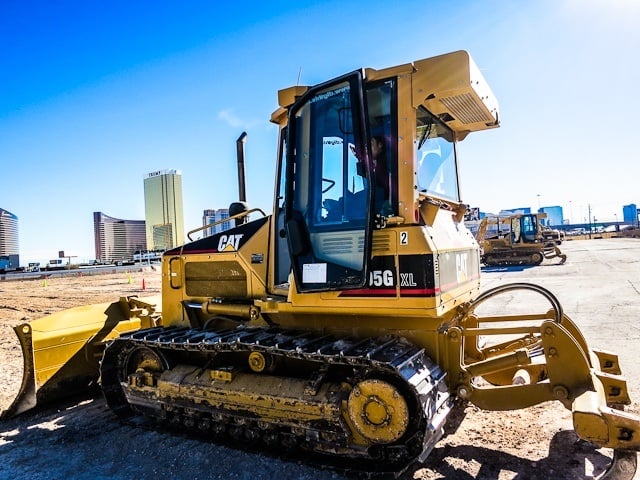 This is  A Toy

Las Vegas is often billed as a place where dreams can come true, and I am living proof that this is the case.

I went to one of the weirdest and greatest attractions I have ever seen and one that could probably only exist in the bizarro world that is Las Vegas.

Ever since I was a child playing with Tonka trucks, I have dreamt of operating heavy machinery.

I remember the heart-palpitating joy I felt as a child when I looked out my window and saw a bulldozer and an excavator sitting dormant at the end of the cul-de-sac where a foundation for a new house was being dug.

I ran down the street and sat in the driver’s seat of each, pulling handles, hitting buttons, and imagining that I was moving earth and destroying lawns.

There were no keys left behind, but I dreamt of one day becoming a grown-up and driving these bad boys around because that is the type of thing that adults do.

But somewhere between voting for the first time and seeing my friends start to get married, I realized that grown-ups do not drive construction vehicles very often, and certainly not for fun.

That is until the geniuses at Dig This realized there was money to be made on the unfulfilled childish desires of grown men.

Next, they should invent a pool filled with ice cream, or a go-car track made of bubble wrap. 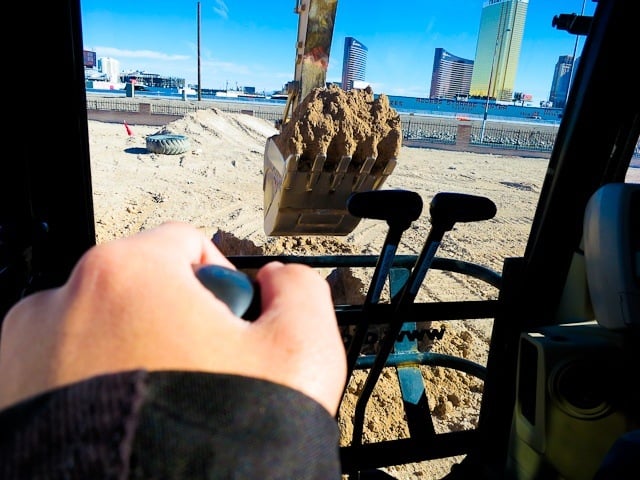 Dig This is located just a mile from the Vegas strip, which is convenient, but it seems like it could be another world away.

Dig This is a big construction site, with all sorts of bulldozers and excavators.

The business started when a construction site closed down because of lack of funding, and some genius, and I use that word with no intended irony at all, decided to make a grown-up playground/sandbox hybrid out of it.

You can play for ninety minutes for $249, which is the standard package, or you can even play around all day.

They have all sorts of group packages, so if you want something to do that doesn’t involve drinking while in Vegas (and you can’t drink, there’s a breathalyzer test before you hop behind the controls) this might be just about the best thing going.

I was traveling with my Swiss friend Bastian, and the two of us arrived at the site in the early afternoon, ready to move earth and dig canyons for an hour and a half.

Quickly, we realized the reservation I made did not include Bastian somehow, which was an honest mistake, and not just a passive-aggressive burn for his intolerable snoring.

But the crew was cool about it and moved some stuff around to accommodate us.

Before we started, we had to get a little tutorial and safety demonstration because you know we were about to operate heavy machinery with no certification, experience, or any guarantee of competent hand-eye coordination.

In case the “grown up playing in a grown-up sandbox with grown-up toys” parallel wasn’t obvious enough, they demonstrated how things were going to go in a…you guessed it…sandbox.

While our leader stressed safety to the twelve or so of us standing around, he did so while making jokes and keeping the presentation from getting boring.

We were then broken into two groups, half of us getting behind the controls of excavators and half in bulldozers. I got behind the levers of an excavator. And when I say levers, I do mean levers. There are no steering wheels.

As a result, it takes a little while to learn how to move, but you are wearing a headset, and the leader is in your ear, taking you through all of the controls and making sure you know what you are doing.

After some basic instructions, we started digging a trench. No, this is not a way for a business to use sucker tourists to pay them for the opportunity to do the company’s job (and yes, that is a dig at every “pick your own” orchard out there).

This was a lot of fun, and there were pretty much no limits to how I could move earth from one place to another.

I quickly realized I had dug a trench all around myself, creating a sort of defensive moat, which was appropriate because moving hundreds of pounds of earth made me feel like a King, nay, a God.

Another cool thing about Dig This is that you don’t just dig holes, even though, trust me, I would’ve been okay with that for ninety minutes. They have games for you to play.

Next, I got to stack those giant one-ton tires that you only see on earthmovers and the most menacing transformers.

By this point, I was becoming quite confident in my abilities (see the earlier comment about becoming a deity), so I wanted to see how high I could lift one of those tires into the air and fling it onto the pile.

When I did this, the tire did not land on its side. It hit the ground and rolled in precisely the manner a tire is supposed to, fast and direct.

As it bounced toward the high chain-link fence forming the perimeter of the facility, I saw that a woman was walking on the other side of the fence along the sidewalk, and she was walking toward where the tire was going to hit.

I immediately began to yell and wave my arms at the woman, which did exactly nothing.

I watched in horror, relief, and I’ll admit it, amusement once I realized that the fence was, of course, built to withstand a heck of a lot more than a stray tire, as the tire crashed into the fence next to the unsuspecting pedestrian.

She was more than a little surprised, of course. 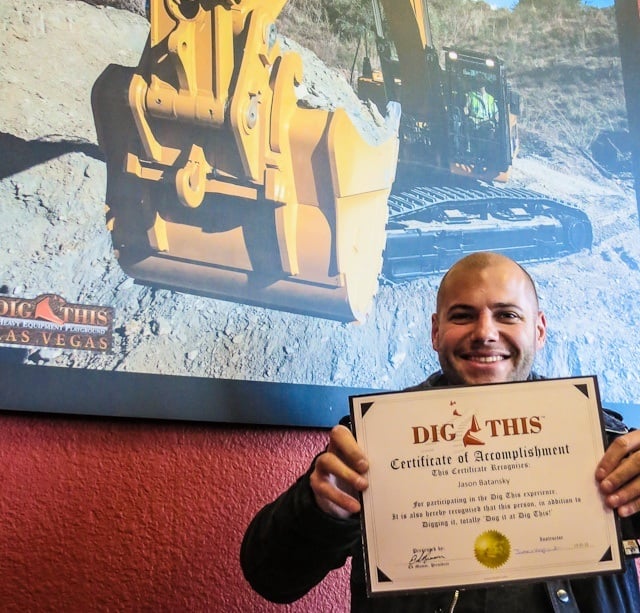 Could the state of Nevada recognize this?

After terrorizing innocent bystanders, we completed the day by playing a game of basketball with a real basketball and trying to throw it into the center of the stacked tires, which formed a convenient hoop.

That was also super fun, and it made me glad I was given an excavator. But the fun was soon over, and I admit time seemed to have flown by.

I felt fulfilled, productive, and little sweaty, in short, I felt like I had done an honest day’s work, while also having one of the more unique vacation experiences of my life. 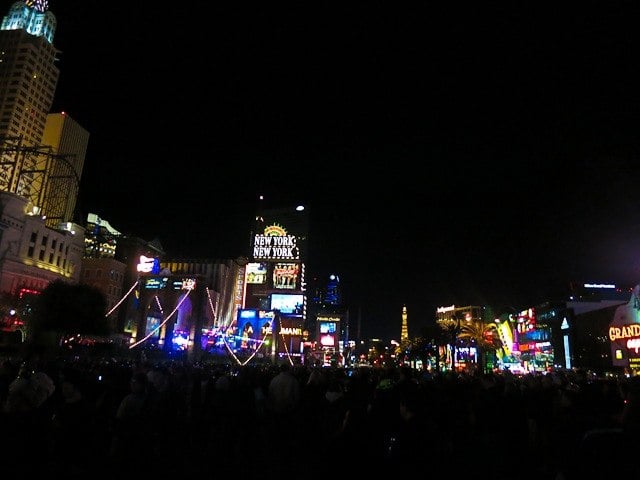 Soon Bastian and I were back to what we did best in Vegas, drinking and partying.

But this time, having done the Las Vegas’ Dig This’, knowing (or deluding myself) that I had earned it.

If you also want to try this, I would suggest booking the most popular experience they offer that includes the use of the Bulldozer or Excavator for 90 minutes at $249.

My trip on the Dig This: Heavy Equipment Playground was provided at no cost in collaboration with http://www.digthisvegas.com.  Opinions are my own.

This is pretty cool. We offer this with some of our travel packages but i've yet to try it.

oh my goodness! This looks so fun! My friends and I will totally enjoy this =)

Wow what an interesting activity, something I never even realized existed! I bet my husband would love this on our next trip to Vegas! Thanks for sharing!