” To repeat, ad infinitum, though train tickets are a lot easier to land these days, don't expect next-day middle-berth hard sleeper miracles for the most popular routes. To wit: expect everyone and their dog to be trying to get on the Chengdu-Lhasa train.”? —- Lonely Planet China

I hailed a taxi to Sim's Cozy Guest House around 1pm and the adventure of arranging my travels into Tibet had begun. Successfully arriving at Sim's was my first victory. I entered the reception area, turned to my right, and saw the big travel desk. Things were looking good.

I asked about getting a train ticket to Lhasa, and the initial response I got (which I had expected based on a recent Thorntree message) was that they weren't available. Before I could be given an answer a to why they were so hard to come by, I was told a friend might be able to help. I agreed to explore that option, and confirmed my interest in a soft-sleeper (they are the most expensive option, which is probably why I was told they're easier to get) and preferred departure date (Tuesday, March 18). The train departs from Chengdu to Lhasa every other day. 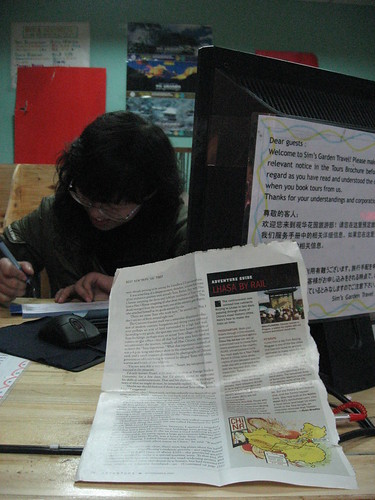 A few minutes and a phone call or two later and I had confirmation that I could get a soft-sleeper berth on March 18! I asked if I was lucky to get such a ticket, and the guy nodded yes. My heart went pitter-patter as I had just moved a colossal step forward in my desire to enter Tibet via the world's highest railway. As a prop for the photo above, I pulled out a page I had torn out of National Geographic Adventure last year which listed the train trip into Tibet as one of the best new adventures for 2008.

Since the agency could confirm I was getting a ticket, they could also start to process my Tibet Permit as well. I put down a cash deposit, asked a host of questions, and was told I could pick up the train ticket after 3pm the following day. I would receive a photocopy of the Tibet Permit March 17, the day before my departure. I asked if there would be any reason I wouldn't get it before my train departure. The woman indicated it'd be fine as long as there weren't any government deemed problems in the region. I knocked on the wooden desk for good luck, feeling a tad concerned about the week's turnaround on the permit, though ecstatic about the train ticket.