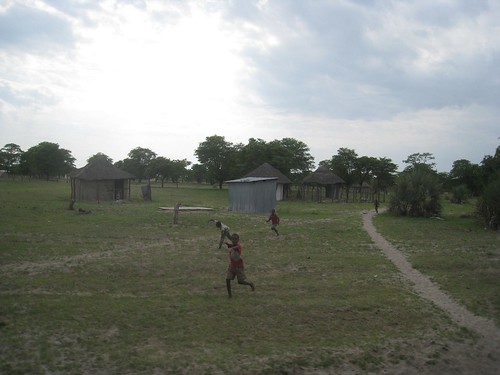 Between Kruger Park and my first few mornings in Botswana, I was getting use to the early wake-up calls. The birds were often noisy enough to do the trick. After breaking down the tents, we stuffed our daypacks with the limited personal possessions we wanted to take into the Delta, as the rest would remain in the locked van at the Maun campground. Breakfast was cold and bland, corn flakes with milk. 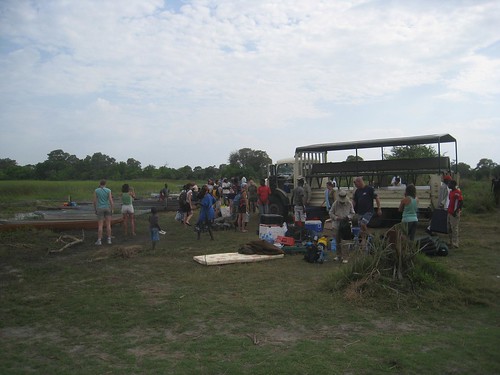 We shared a large, old, open-air Mercedes truck with a group of Belgians touring southern Africa. The prior afternoon, they had descended upon the the little barside pool in mass, playing a game where they tried to keep a volleyball aloft. There was no attempt to socialize between our two groups. Clearly, and to my surprise, everyone was more comfortable with the familiar personalities within their own tribe. 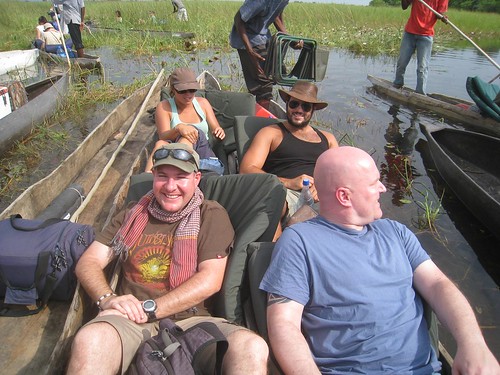 All the food and gear was stowed underneath the two rows of benches, and we drove one and a half hours to the traditional mokoros (dugout canoes) at the eastern edge of the Delta. Along the way, village kids waved, as did some adults. It made me feel welcomed in their country. As Dion warned us, there was a bit of confusion between the unloading of the truck, and loading of the mokoros, but it didn't last long, and soon I had a front seat for our foray into Botswana's main attraction. Ingrid was relaxing behind me, while Peter and Richard, along with their gear, were almost heavy enough to sink their vessel. 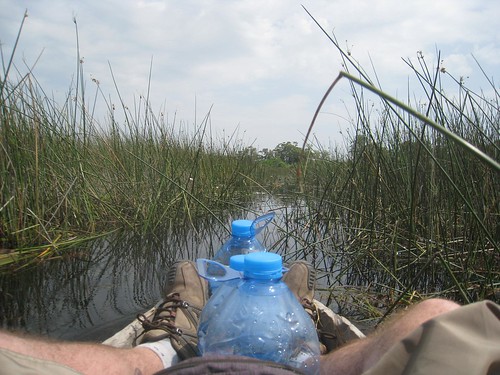 All of the mokoros were packed and low in the water, but as long as you didn't move, it was manageable. We set off in a single file line through the various channels, with barely a sound when no one was speaking. Every once and awhile, the buzz of a scenic flight, or someone headed to the more expensive camps deeper in the Delta, could be heard. The sun was intense by mid-morning. 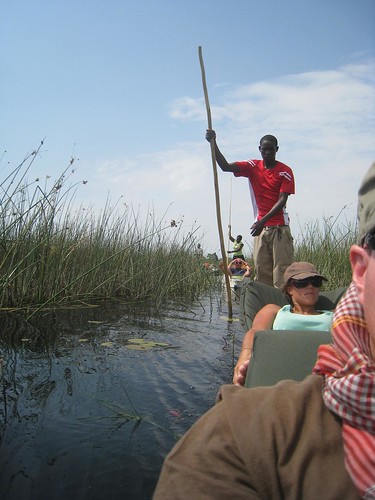 Our campsite was located on a small island, about a kilometer from another campsite on a bigger island which was used by the Belgians that night. The mokoros were unloaded, and since there were only four tents, I shared one with Ingrid while the rest got their own. Dion pointed in one direction and told us not to go there, as it was the direction of a lagoon frequented by hippos. Otherwise, the local Delta guides' rule was we were not to walk out of sight of the camp, which meant no more than 20 meters in any direction. 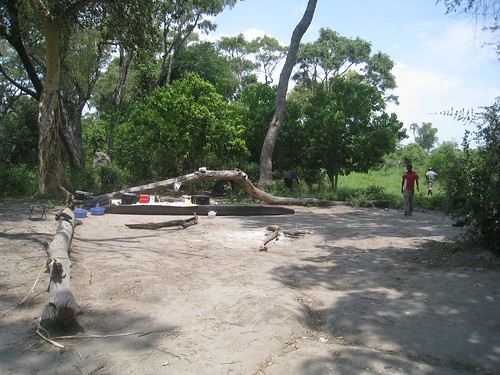 Due to the mid-day heat, our game walks were scheduled for the early morning and late afternoon, meaning we had the afternoon to kill around camp. It was too stuffy to sleep in the tent, so some were lying on their mats outside. I was too excited to lay still, and sat around with our guide and a female poler (as the mokoros are pushed along by a wooden pole, so named are the people guiding them), tasting the Delta water which was surprisingly clean and clear, and the Sycamore figs which fell to the ground (aided by hungry birds). 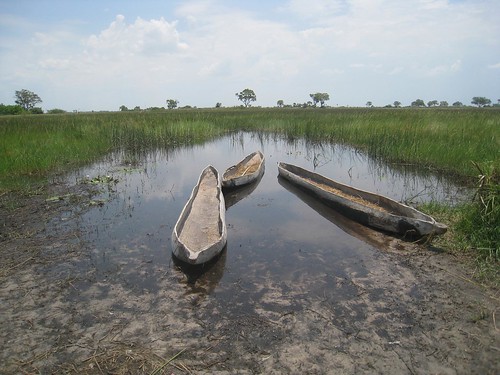 At 5pm, we boarded the mokoros for the quick ride to the larger island nearby. The sunset game walk was lead by a local, Broc, who lived in the village we passed at the edge of the Delta. He was in training, so there was another guide he consulted from time to time who otherwise remained quiet. Botswana is committed to preserving its wildlife, so shooting animals is against the law, and thus the guides do not carry guns. In the preceding days and weeks, the idea of walking around unarmed seemed ludicrous, however once we set off, I felt fairly safe. I already knew how unlikely it would be to see a lion before it saw us (and trotted away), or for a hippo to leave the water before it was dark. 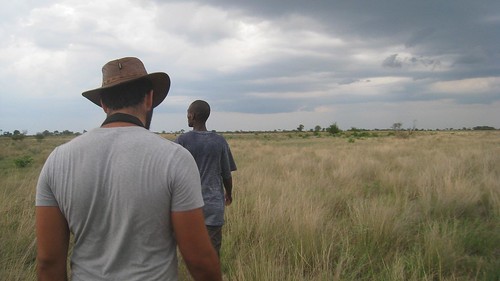 At any rate, the scenery was beautiful. Carmelita was captivated by all the birds, the names of which our guides were easily able to provide from a distance. We saw hippo prints and dung from a prior night, though no hippos in the large pool we passed. Clouds were gathering before we had left camp, and despite the 99% likelihood of rain, I didn't bring my new rain jacket on the walk. I paid the price when it started to pour 30 minutes from the boats. Wet and cold, we returned to camp where I devoured the lasagna-type dish Dion had cooked up in our absence. I was the only one to take his advice literally, bringing only one shirt, as even he had brought his full kit. Trying to dry myself around the fire, he took pity on me and offered one of his well-worn t-shirts with enough room for me to grow my belly to twice its size. 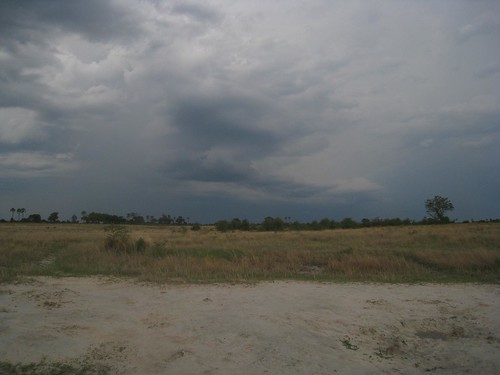 The rain had let up for dinner, but soon started again so Peter, Richard, Ingrid and I all gathered in my tent to play some cards.Carmelita, as you might imagine, kept to herself much of the time.Crowded in the tent, I realized an hour too late that either condensation or a leak had resulted in a big area of my sleeping bag getting soaked.When it came time for bed, I was cold, wet, uncomfortable, and bothered by my stomach.Eventually, I bit the bullet and donned my jacket, braved the rain and potential encounters with hippos and cobras, and used the non-designated facilities (a patch of leaves a few meters from the tents versus a hole farther in the direction of the perilous lagoon).At night, using just a headlamp, you don't have to walk more than a few meters from camp to feel a though you're in the middle of nowhere.

I kept my jacket on when I returned to the tent.I had resolved one problem but being damp, cold, and uncomfortable was unavoidable.I hoped a little music would calm my nerves, and four tunes by the Red Hot Chili Peppers later, I managed a few hours of sleep.

There are various dental care products and mouth washes available in the market which are helpful in reducing the pain of a sore. Oral care products such as gel, pastes, and washes help in providing relief from pain.

The boat given here is best.

Just came and read, this is wow! I was seek from many blogs, but here is the best, I love it.

You may have not intended to do so, but I think you have managed to express the state of mind that a lot of people are in. The sense of wanting to help, but not knowing how or where, is something a lot of us are going through.

Can any one tell me if there are Plans available to build an Albacore out of Wood?