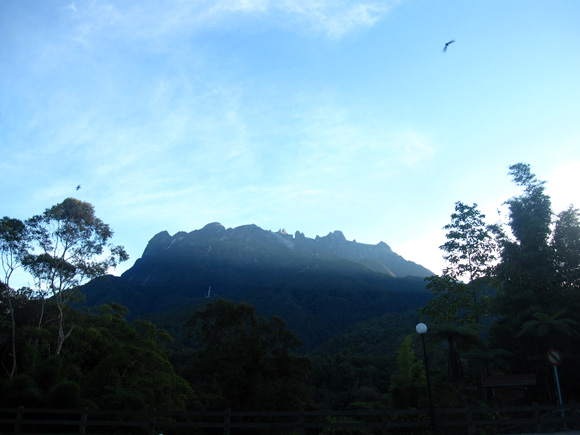 Mount Kinabalu, So Clear in the Morning!

Mount Kinabalu's location is on the tropical island of Borneo, positioned in the Malaysian state of Sabah. I arrived to Kota Kinabalu, the nearest major city to the mountain, eager to summit the peak and in the end proclaim that I had defeated one of SE Asia's highest (4,095 meters) and most captivating wonders!

Unfortunately, there's only one place to spend the night on the mountain, and it cames at the unaffordable price of about $100 USD per night!

I had to consider a different option.

My friend and I decided to avoid the normal hiking routine and attempt to accomplish the entire trek in a single day. 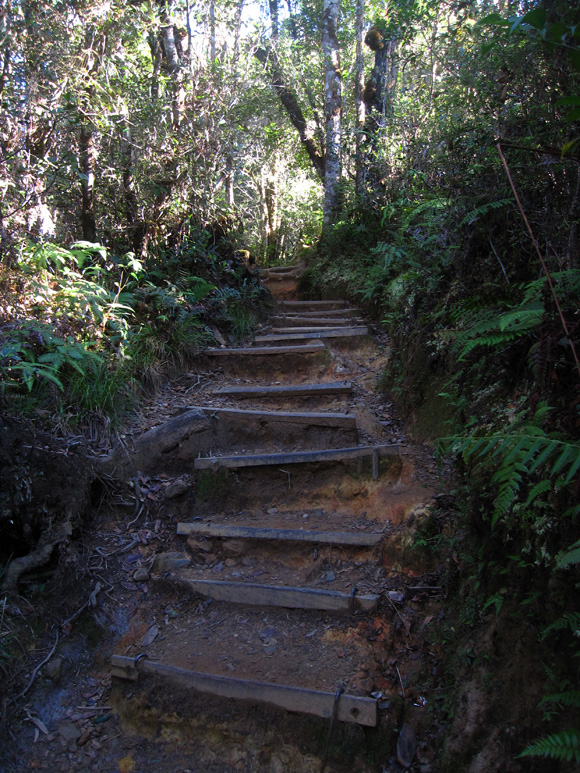 The Start of the Trail

We awoke at about 4 am, knowing we would need to push ourselves to the top in order to make it down before nighttime darkness would fall. Though the trail is well used and very marked out, the park requires all hikers to hire a guide.

The guides took their time to arrive at the base of the mountain, assuring us there was no hurry to begin climbing and that the weather looked good for the day. We breathed a sigh of relief (they were the experts, right?). 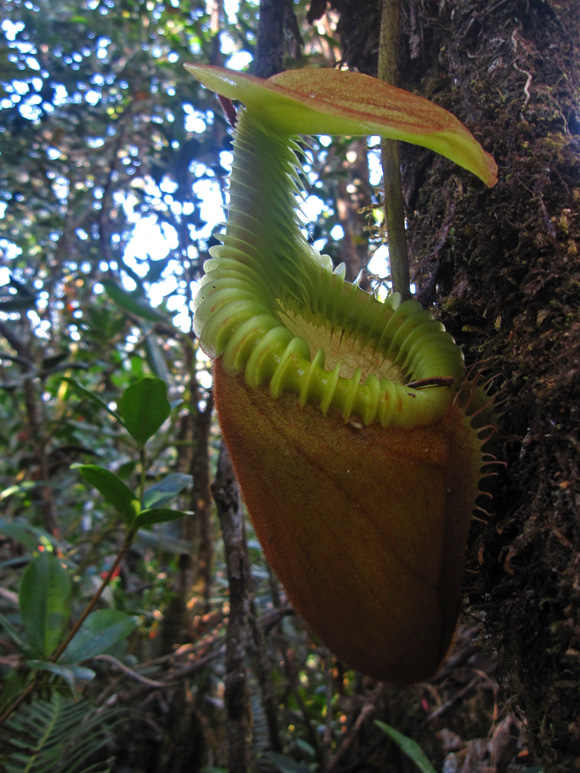 We began the grueling hike at about 7 am, a virtual 45 degree thigh burning staircase. The diverse botany of Borneo was a true pleasure to see, and the spectacular scenery changed every hour with our gain of elevation.

As we continued, the breeze transformed from a musty tropical humidity to a stiff wall of coldness, the previous sweat on our shirts sending chills through our bodies. 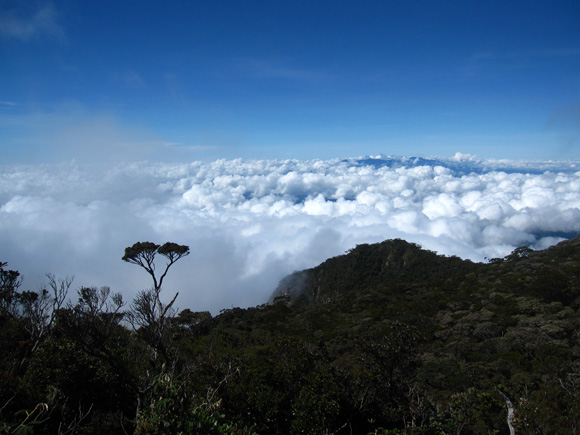 We arrived at the Laban Rata camp (where most people spend the night) with ample time to make it to the top and back before darkness.

We stuffed ourselves with some carbohydrates, indulged in a few energy enlifting snacks and set off for the final 2 hours to the summit. Though the weather was still adequate, there was an evil chill in the air, the kind that tosses signals of poor conditions to come. 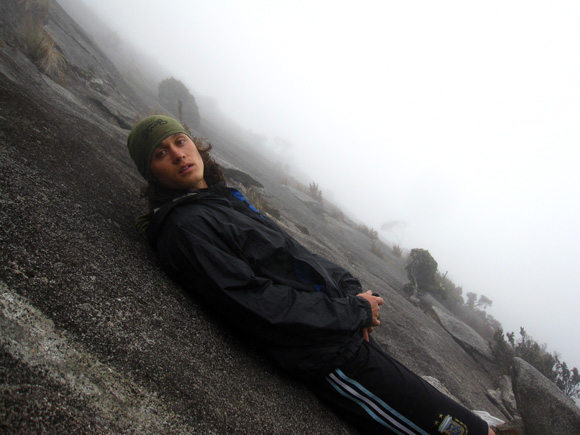 The final bit of the hike is a steep rock climbing scramble, making it necessary to hold on to ropes in order to reach the top. The threatening weather negatively barked on us as we approached the home stretch of the top of Mount Kinabalu.

Electrifying bolts of lightning followed by sonic booms of thunder seemed to erupt from nowhere. The rain that followed was like a bucket being dumped from the heavens. The jagged rocks weren't so accommodating, creating sheets of runoff water and making it next to impossible to continue. 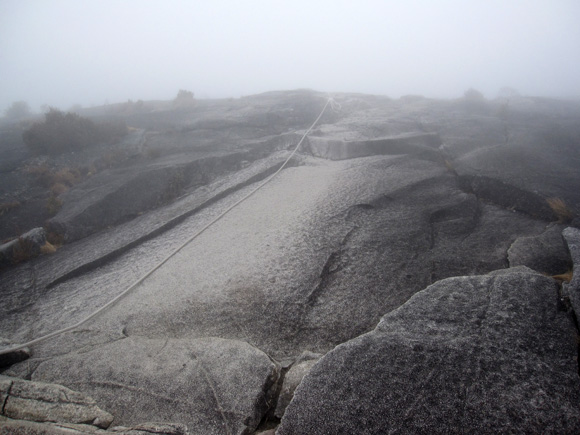 Rain and Fog on Mount Kinabalu

Our guide received a call from the park headquarters, a message we had already assumed was inevitable. We were told that we could not possibly continue, due to the torrential rain.

Just 30 minutes from the top, and our hearts sank.

Through our disappointment, we had NO choice but to turn around, leaving the top of Mount Kinabalu a mystery blanketed in threatening clouds.

As we descended, once again the shift of weather hit us hard, except now we were throwing off the layers of clothing and feeling the rays of the tropical sunshine. We made it off Mount Kinabalu, sweaty and fatigued, the thought of freezing coldness and torrential rain just a memory.

Though because of the weather conditions we failed to make it to the top of Mount Kinabalu, the excitement and beauty of climbing one of SE Asia's highest peaks and being surrounded by tropical beauty was undoubtedly worth all the time and energy exerted.

Here's how much it costs to climb Mount Kinabalu in 1 day:

223.50 MYR ($74.82) that included park entry fees, guide (split by 2), mandatory insurance and a short shuttle ride. I guess the only way one could save a little more money is by getting 2 more people to use the same guide.

Tag on an extra 100 bucks or so for spending the night at the shivering Laban Rata base camp.

I would still recommend attempting to climb Mount Kinabalu in 1 day, just beware that nature is much more powerful than any weather man!

Hi Mark, do you remember which guide service you used? And how you went about booking them?

Trying to do the 1-day Kinabalu climb on Nov. 2nd with 3 others, and the best price I'm getting is $226pp. Let that sink in: nearly 1K for 4 people to climb the mountain. Insane. Absolute racket they're running on the mountain.

Trying to find other options, including a private guide. I'm told you can hire guides the day of, but can't start hiking until 7am, which as you well know, seems to limit your chances of summiting.

If you have any insights, would greatly appreciate it.

I am planning to do the same this January. Do you think I need to book it in advance, i mean, now? or can I just wait till 2 or 3 days before departure to organize everything? Is it enough if I just show up at 7am at the park or is it better to contact them first?

I've been trying to call the park but no one answers... it is quite difficult to reach them in their business hours from Europe...

Anyways, thank you in advance!

Kind of silly to climb in a day. The top is hidden after mid morning so inevitably no views. Poor weather is inevitable in the afternoon. This is SEA.

Better luck next time...but the views look incredible and the experience sounds worthwhile even if you didn't quite make it to the top.

Better luck next time...but the views look incredible and the experience sounds worthwhile even if you didn't quite make it to the top.