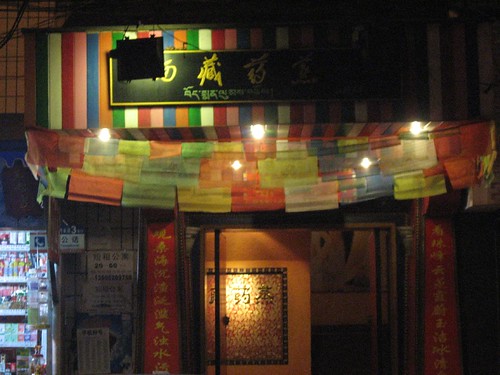 After an afternoon sightseeing at DuFu's cottage, prior home of a famous Chinese poet, I decided to check out a Chinese Tibetan spa near Charlie's apartment building. I only knew it was a spa because I had asked him about the prayer flags over the front entrance a few days earlier.

I took the elevator up to the top floor, and was happy to see a well-decorated, warm and welcoming reception area. The language barrier was a big issue, however having been to a spa previously with Charlie, I had a sense of the routine.

First, they showed me to a locker where I put away all my clothes. I was standing there buck-naked for a moment until the attendant was kind enough to hand me a towel. I spent about 30 minutes soaking in a wooden tub of hot water and Tibetan medicine. The medicine was red, which gave the water a similar tint. Next, I showered and changed into the supplied pajamas. The attendant brought me to a dark room with lounge chairs, each equipped with a remote and small flat screen TV. I flipped around the channels until boredom set in, and then asked for a massage. 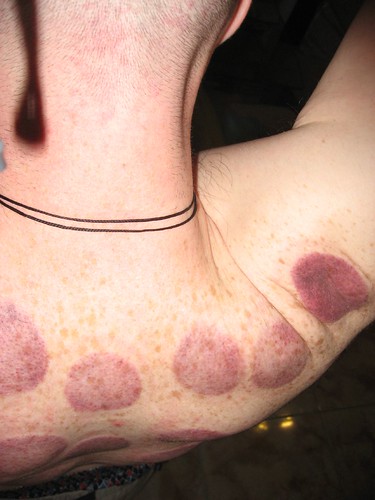 I was lead to a room where a Chinese masseuse eventually entered. She pointed at a poster on the wall which was written in Chinese. After a minute or two of being completely confused, I pointed to what I thought was the cheapest option (there were numbers like 30, 60 and 90 listed, but I had no sense of whether it was related to cost or time). The initial massage lasted about an hour. And then….

A cart of round glass jars was wheeled into the room. I'd seen what was about to happen on TV once, so I knew what was coming. First, I received Gua Sha, a treatment whereby a piece of metal is scraped across my back. It didn't hurt, but it did make me wonder what the hell was being done to me. Then, the woman lit cotton balls on fire under the jars, creating smoke which allowed for a vacuum effect when the jar was pressed against my back. My entire back was filled with the jars, and I was left to bear them alone for 10 minutes. It felt strange, like an octopus was slapped on my back, in no hurry to release itself. I decided to grin and bear it.

Eventually the jars were slowly peeled off of me, and when they were all gone, I sat upright. The woman pointed at my left shoulder, and I was horrified to see a giant purple circle. When I got back to my locker to change, I looked in the mirror and was aghast at the results of what was suppose to be a relaxing massage! 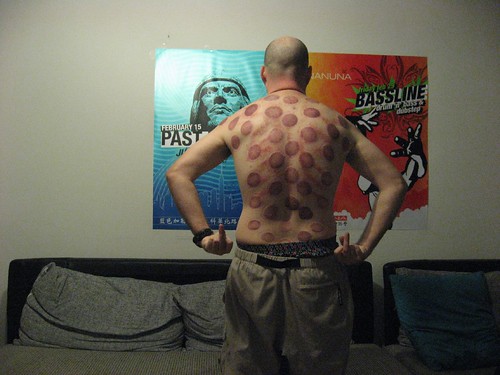 Once I got back to Charlie's apartment, I found out that the ancient Chinese medical treatment I had just unknowingly requested was called Ba Guan (aka fire-cupping). It is meant to cleanse the body of toxins and treat certain ailments. And it would take up to a week for the bruising to disappear. In actuality, as I write this more than 3 weeks later, I can still see the outlines of circles on my back and shoulders, making me wonder if I'll never see them completely fade.

You can see a few more photos of the actual process on Ben's Blog.

this treatment actually works very well if you are in fact injured or something like that. Take a swollen knee for example, what happened was my doctor poked a few holes with needles on the side of my knee, and put the suction cup on it, and it quite literally sucked the "bad blood" as my doctor put it (the blood was black, ew.), out through the holes, which gets rid of the swollen knee. but if there's nothing wrong with you, nothing really happens LOL. but i gotta admit, it felt really weird when i did it.

I wasn't aware that it was used to treat injuries.....I just thought it was for ailments like the flue, etc. Interesting, but still not something I intend to do again!

Wow! I am a massage student and now I know NEVER to get a massage with a language barrier. I thought those were burns. I also thought the cupping glass was supposed to be gently moved about the body, not left in place to cause a mass of hickies all over your client. Sorry, dude! That sucks!!!

I've gotten quite a few massages with a language barrier, but at least I usually could point to a rate card that was understandable. Not so much in a lot of Chinese spas!

Hi Pet, thanks for stopping by. Ba Guan was certainly an interesting experience, though I'm not sure I could do it again, given the marks were still on my body months later. It didn't hurt physically, but mentally it was a little unsettling to see my skin so purple.

Hi Pet, thanks for stopping by. Ba Guan was certainly an interesting experience, though I'm not sure I could do it again, given the marks were still on my body months later. It didn't hurt physically, but mentally it was a little unsettling to see my skin so purple.