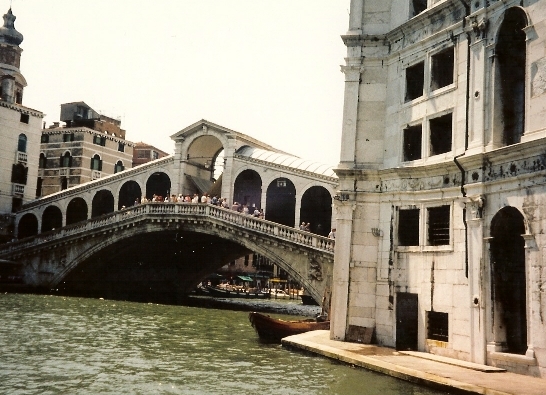 The following journal entry was written on Thursday, July 23, 1998:

When we arrived in Venice, I was still feeling ill. It was about 9 AM, and we had a full day ahead of us. After mulling around the train station a bit, we decided to find a place to stay right away. A man approached us from the Hotel Leonardo, who said he had a room for five people. Since it was only 10 minutes from the station, we decided to take it. When we got there, we found out our room was merely a double bed, with three single cots/mattresses wedged in. There was no room to walk. There was also a sink and a pisser in the room. Immediately after opening the window shutters, an Italian man across the alley from us began shouting at us. Apparently he didn't like Americans. Since none of us knew what the hell he was saying, we just ignored his adamant rants.

We got ready to go to the beach. Our first mistake was buying a 35,000 lire ($20) vaporetto (water bus) pass. They never checked us (or anyone else). This made me wonder if anyone else buys tickets besides tourists? The minute I had stepped out of the train station, I had fallen in love with the city. This was reinforced after my first vaporetto ride down the Grand Canal. San Marco and San Giorggio Maggiore were spectacular sights. 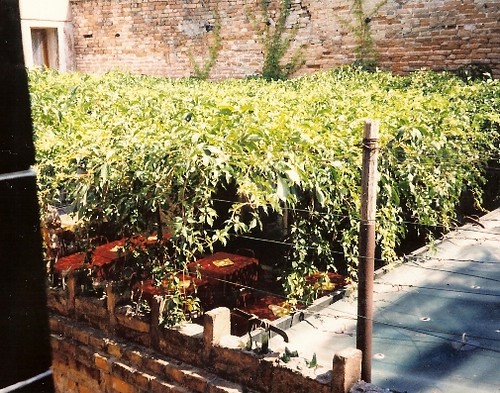 We reached the beach after a one hour ride. Lido's main street had pink marble sidewalks from end to end. The street was also lined with gelaterias (ice cream stores) and pizzerias. We arrived at the beach a little before noon. The sky was cloudless, the sun hot. It was at least in the mid 90's. I knew I was going to have to be extra special in protecting myself from the sun. For this reason, I wore my hat (with 360 degree rim) at all times, except when in the water, my prescription sunglasses (in the water too), and plenty of sun block. When we left around 3 AM I had managed to survive the hottest part of the day with patchy sunburns on my face and legs. Except for a painful burn on my right ankle, I felt very lucky and confident. I don't think anyone else brought sun tan lotion.

The beach had lots of small shells on it, and seemed relatively clean. We settled on a small section of public/free beach. There was a giant luxury hotel (former palazzo probably) to our right. Both sides of the free beach were lined with cabanas and umbrellas for as far as the eye could see. Apparently, the hotels on Lido's beach attract a wealthy and elitist clientele. It seemed like the locals were mostly on the public beach. One of the first things I noticed was the openness of women to sunbathe topless. It didn't really shock or surprise me, but it did provide for some nice views. Luckily, however some people stared a lot more than me (I never stared, just glanced)! There were very few one piece bathing suits, and plenty of Speedos on the guys. Like everywhere in Europe, the people of Venice appear much thinner than Americans. Both males and females are dark (olive) skinned with dark hair. The fashion seems to revolve around sandals, comfortable/thin dresses, and the color black. 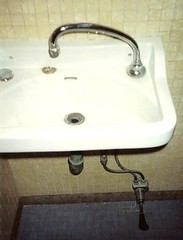 Then we got back from the beach, we showered. There was a bathtub and detachable shower head, which only reached to the chest level of one's body. I showered kneeling down, and tried to get the hang of such a method. Eric had gone in before me and had sprayed the entire bathroom with water (he tried to shower standing up). The sink had a foot peddle you used to control the water. I assume this is so you don't have people turning knobs with their recently soiled hands.

We went to dinner at an Italian restaurant down the block from our hotel, the Friggatorio. There, the meals seemed cheap for what you got. I was the only one who did not order a three course meal. After dinner, we sat at the end of a canal to watch the sunset. It was extremely beautiful. The sun seemed to create a red/orange glow along the canals and buildings. Perhaps the best part of Venice is the lack of noise. There are no cars (except on the island of Lido), and the Venetian lifestyle appears to have changed little in the past 1,000 years. Upon nightfall, I decided to go to bed, since I was sick and tired. The sun and heat managed to drain my energy quite easily.

For all journal entries, go to Backpacking in Europe