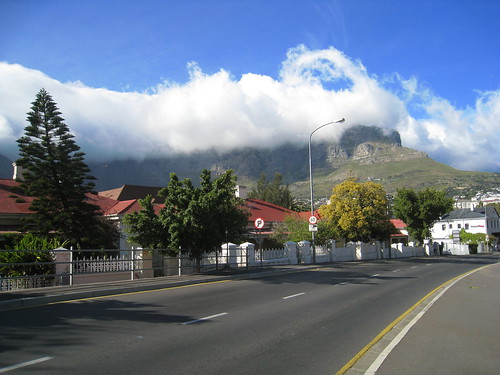 My proud place at the front of the immigration line only meant I received the news sooner rather than later, and by a none too pleased woman.

The last time I booked a flight in advance to ensure I had proof of onward travel was Singapore to Hong Kong back in February.

Officials from China, Nepal, India, and SE Asia didn't seem overly concerned that I would take up residence in their countries, so why would South Africa be different, I thought.

The entire plane had to pass through immigration before I was lead to an internet connection in an office upon my request.

A young woman was to stay by my side the whole time, and eventually, a man joined us in the office too. I was glad they were both friendly.

I was kicking myself for not having Warren's cell phone number on paper as I knew he was waiting for me.

My hope to have some semblance of control over a costly decision under a cloud of fatigue and stress was dashed when the internet connection gave out after ten minutes.

Not even enough time to get one quote.

It was suggested I could go to the airline counters to buy direct, though it appeared to be in violation of airport protocol.

The man lead the way in a quiet and covert manner as we passed customs and a security guard.

I passed by Warren and was able to quickly tell him why I was delayed. The only counter open was British Airways. 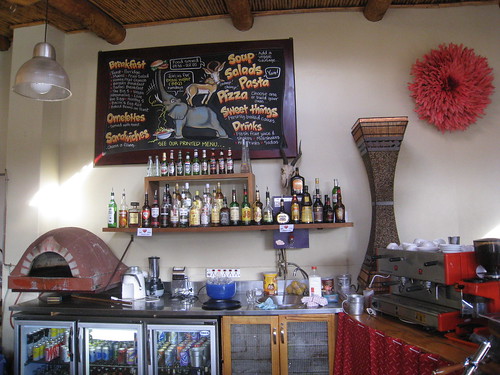 I once again admitted to arriving on the continent without proper documentation.

The woman who was helping me tried to say that every country in the world requires a return ticket for you to enter.

I briefly considered a foray into my last 8 months of travel, though bit my tongue instead.

To aid me in the decision, a map of the world was unfolded on the counter.

The woman handler had left by this point, while the man stood patiently to my right.

Dealing with British Airways put a big limit on my options.

I could fly from Jo'burg to Victoria Falls for $200, however by that time I might be low on money and didn't want to find myself in central Africa without the funds to extricate myself.

Alternatively, I could fly from Jo'burg to Cairo for $593 on Air Egypt, the catch being a requirement that I include a British Airways flight since they would be booking the whole ticket for me.

Under increasing pressure from the airport handler, the British Airways woman, and myself knowing that Warren had been waiting for me almost 2 hours, I bought the Cairo flight.I could always change the dates later for a $50 fee.

Relieved to have a ticket in hand, the man walked me back through a staff security point and found the surly woman who held my entrance into the country in her stamp book. 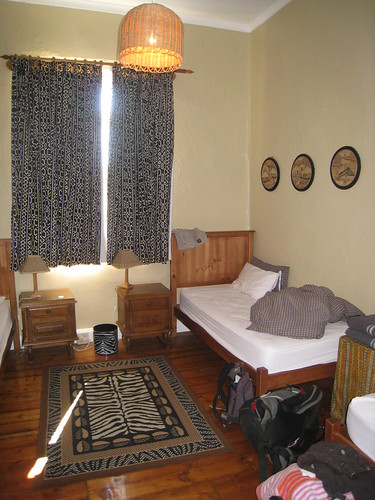 Passport updated, I grabbed my backpack and greeted Warren properly, feeling horrible that I'd kept him waiting so long when he was going out of his way to pick me up at the airport.

Easily saving me $18+ in cab fare, he dropped me off at the award-winning Backpack (hostel, though they're called backpackers in South Africa).

It was dark, chilly, and I was exhausted.

Excited to begin my African adventures, I impetuously signed up for a (hopefully) relaxing full-day tour of the Winelands, to be followed by the hostel's Tuesday night Braai (traditional South African barbecue).