This is a guest post by Rose Witmer (text) and Michael Lynch (photos). If you want to guest post on Go Backpacking, please read more here. 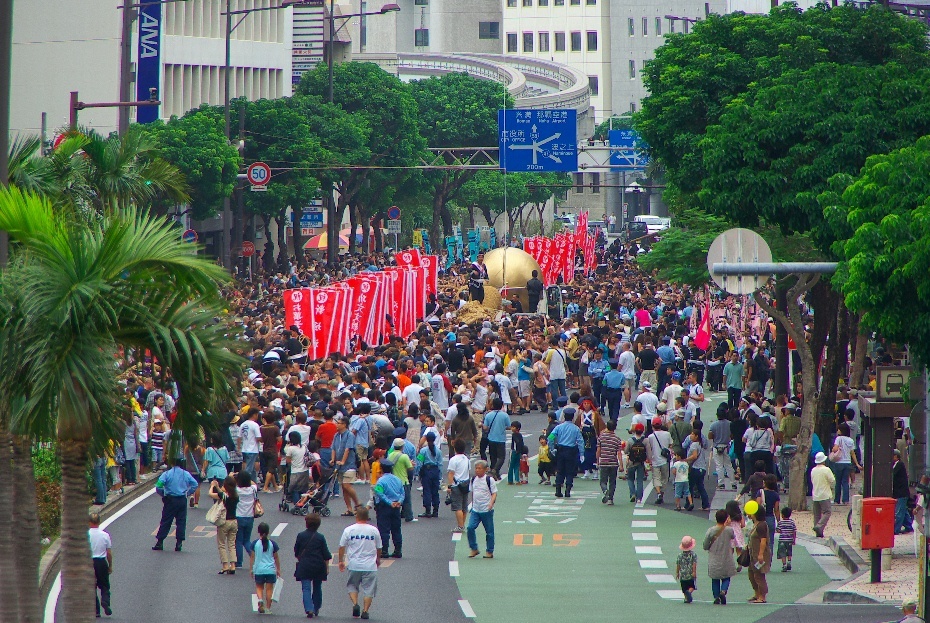 The golden ball waits to be raised in the air

The Naha Festival is host to one of the largest celebrations on Okinawa, Japan.  The usual bustle and traffic of highway 58, which cuts through Okinawa's capitol city, is shut down as tens of thousands gather in the streets around an enormous rice straw rope.

Everyone is chatting with excitement of the battle to come.  Cameras are raised high above the crowd as the user stands on tip-toe in hopes of capturing the spectacular scene.  Suddenly a gong rings out.

Attention turns toward the two lengths of the rope where figures in traditional dress of the kings of the Ryukyu Kingdom era are carried on a wooden platform by four men.  The platforms of the East and West stop and the Kings bow.  Then each king readies their weapon of choice and a battle is acted out between both sides.  It ends in a draw.  The Kings withdraw and everyone prepares for the beginning of the main event. 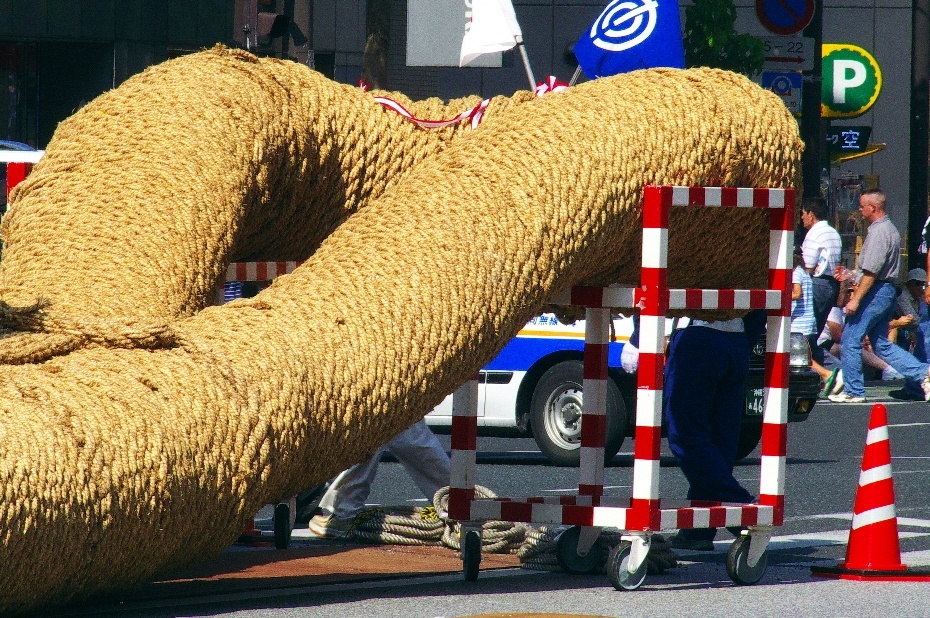 The end of the male rope faces East

Men climb on top of the rope and the crowd closes in, taking hold of the many extended lines of rope.  Where East and West meet, high above the crowd a solid gold ball hangs from a crane at the top level of a tall downtown building.  Eyes watch the ball intently and the throng waits in hushed anticipation.  Suddenly, it breaks open and streamers and confetti of every color twist down to the masses below.  This is the signal.  The war has begun.

The preparation for the event begins long before the day of the tug of war, which is held the weekend of the Japanese National Sports holiday.  Rice straw from the year's harvest is collected and woven into thicker sections, which are then woven together into two 100 meter halves.  Over 200 smaller ropes are then woven into the main piece for the 20,000 plus participants to grab on to and use to pull the main rope in the center.  During the event, both halves will be connected by a long, sturdy log made of dense wood.

In the end, the rope will span several blocks of the island's capitol and will stand taller than most cars.  It will wait in place of Highway 58's median until the day of the festival when the roads are shut down and cars are replaced by thousands of people waiting for the battle to begin.   In 1997 the Guinness Book of World Records made this 200 meter, 43 ton rope made of natural materials as an addition to their collection of record-breaking entries. 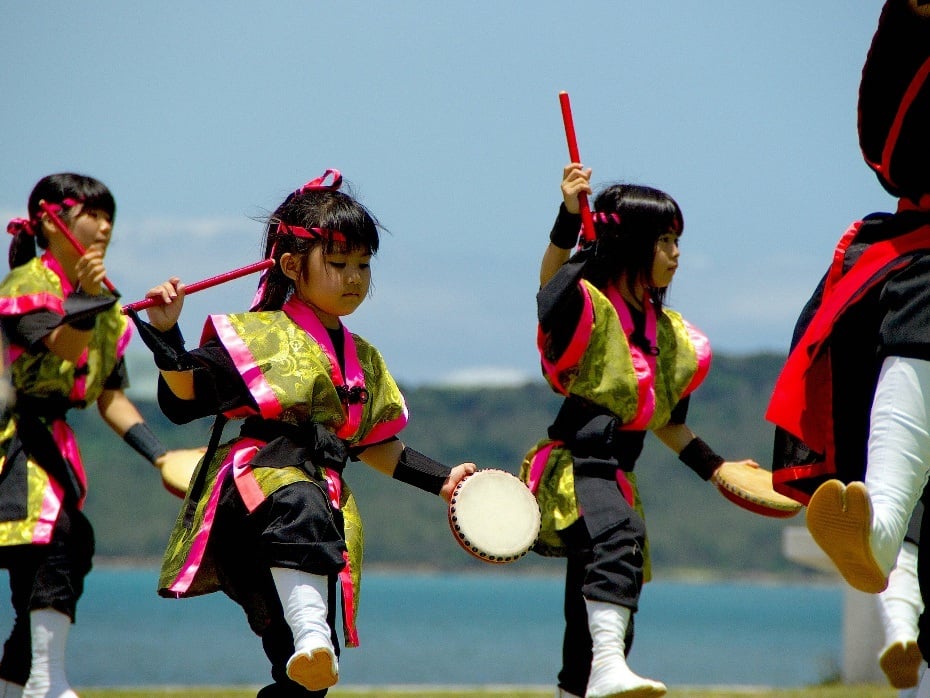 The Naha tug of war festival dates back to the 17th Century Ryukyu Kingdom.  During these times it was used to predict the coming year's fortune as well as pray for rain, a healthy and abundant harvest, and thank the gods for the fortune in the years prior.  Then, the festival would kick off with four main villages demonstrating their strength and skill during Hatagashira, a type of competitive dance with tall poles bearing their village's symbol.

Today, the competition involves many more groups in addition to the four original villages.  As they parade down the street each dancer balances these seven to ten meter poles in a thick bundle of cloth tied around their waist and use their legs to lunge the 40 to 50 kilogram pole in the air before catching it again.  This difficult task can become tiring. The dancer's teammates surround him at all times holding long rods with hooked ends ready to catch the pole should it fall.  Several others wait to step in to continue if the dancer needs to rest. 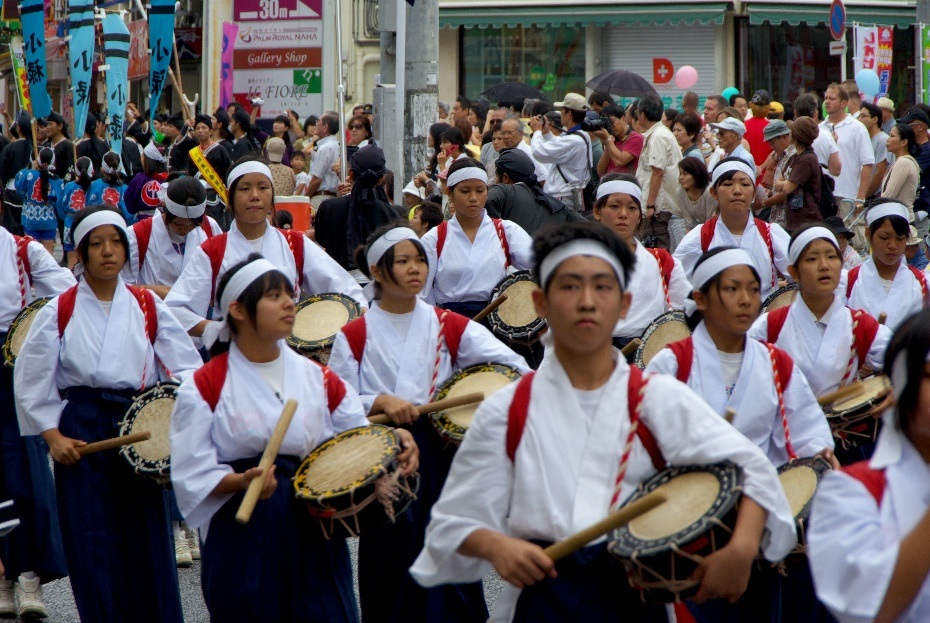 Amongst the sounds of the crowds and competition, the full, low tones of conch shells accompanied by the Sanshin, a three-stringed instrument shaped like a small banjo and covered in snake skin, float through the air.  The deep fog-horn like call of the shells and the twang of the strings blending smoothly with the booming of drums and lively shouts of celebration in the Okinawan language.  Dancers kick their legs up high and spin with drums hanging from their shoulders in the traditional Ryukyuan Eisa dance.  Among the music of the old kingdom, many dojos of all forms of martial arts scattered throughout the southern region of Okinawa will take advantage of this celebration to showcase the talents of their style at different levels.

Amidst the growing air of anticipation, this parade of Hatagashira, Eisa, and Karate leads to a crowd of tens of thousands of people in the center of the city.  Here friendly and excited crowds of people move toward the rope and ready their cameras as the main performances are brought to center stage.  The contest of strength and skill with the competing villages' hatagashira begins, followed by Karate demonstrations by each school's Sensei, or master, while conch shells are blown and drums are beaten.  These are all events leading up to the grand finale, the tug of war.  After the battle between the King of the East and the King of the West, streamers and confetti twirl down from the giant gold ball swinging from a crane above. 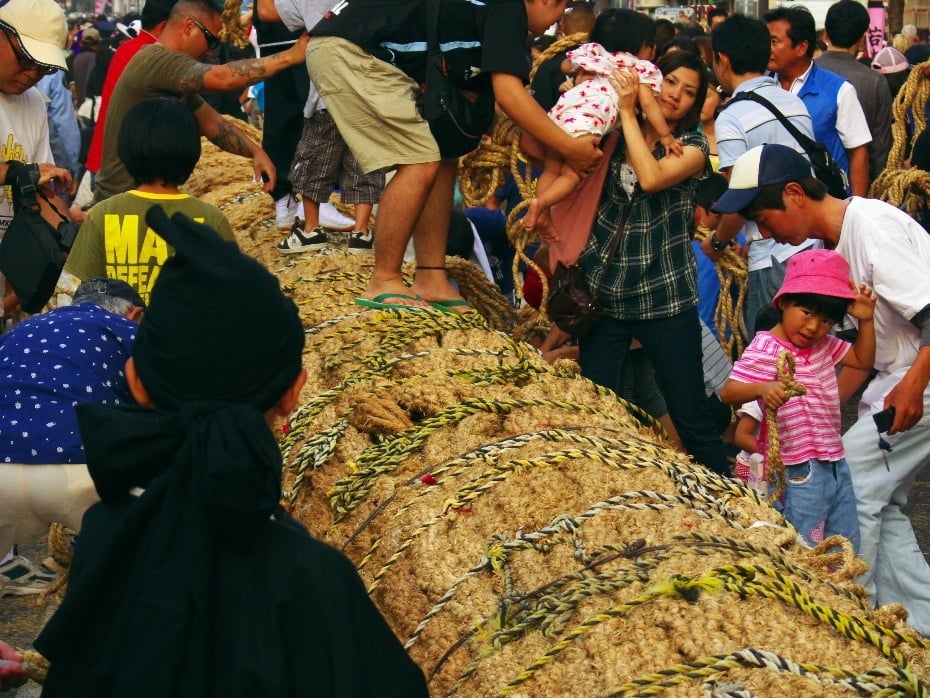 People scramble to cut a piece of the rope

Young children and old grandparents.  Okinawans and Americans.  Everyone pulls with all of their strength on the smaller branches of ropes extending out from the main rope.  The event may last up to 30 minutes, however, it usually only takes 10 before everyone begins gasping for breath and laughing from the exhausting joy and celebration of the games.

Men dressed in traditional Okinawan atire stand on top of the ropes banging metal plates and crying out “Hai-ya!” and “O-Shoi!” encouraging the masses to “pull harder!” and “heave-ho!”.  Unbelievably, the 40 metric ton rope is dragged to one side and the end is called.  Immediately, hundreds of people pull out knives to cut off a piece of the rope to take home for luck in the coming year.

Families and friends excitedly climb up on top of the rope that is higher than most cars to take pictures as proof that they were a part of the world known tug of war.  The once world's largest rope is cut down and taken home, a unique memento of the memories spent celebrating at the Naha Tug of War festival.

Rose Witmer is a young traveler at the beginning of a long journey around the world.  She currently lives in Okinawa, Japan, exploring the jungles and mountains when not enjoying the Japanese city life.  She loves to write and never leaves home without a camera and a notebook.  You can find her on Matador Travel and at her new blog, Samayou Meigui.

Mike Lynch is a photographer in Okinawa, Japan.  For more info visit www.mikesryukyugallery.com

However busy you are, and however hard pressed for time ... never, never, ever hit 'Post' (especially when you're in a rush) before running a spell check :-) !

However busy you are, and however hard pressed for time ... never, never, ever hit 'Post' (especially when you're in a rush) before running a spell check :-) !

Hi Sabina, thanks for sharing your thoughts on Mike and Rose's post. It seems like such an odd festival, I had to feature it. :)