The day after attending the launch party for The Best American Travel Writing 2009, I noticed (via Twitter) that several other big events were occurring in New York City over the weekend.

While Anthony Bourdain's talks were sold out for The Food Network New York Wine & Food Festival, it'd be no trouble for me to attend the Adventures in Travel Expo at the Jacob Javits Convention Center.

Back in Spring 2007, before my backpacking trip around the world, I attended the same convention in Washington, DC so I knew what to expect.

When I re-read what I wrote about that first experience, it occurred to me that I may have become slightly jaded since then.

Either that, or my recent travel experiences have filled in a lot of blanks in my mind about what it is like to visit remote tropical islands, scale high-altitude mountain passes, and discover exotic cultures. 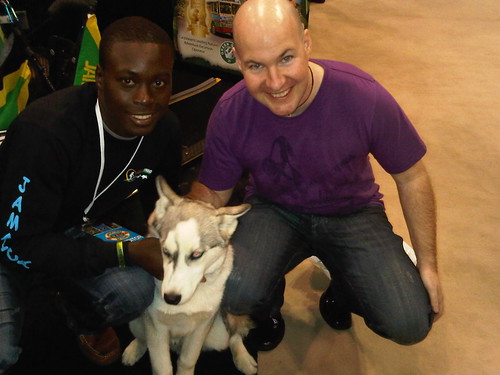 I went with an open mind, a handful of Moo.com business cards, and one planned tweet-up.

The admission at the door was $15, and unlike my last experience, I didn't have a National Geographic coupon to waive it.

Once inside, I was faced with a massive room filled with booths highlighting everything from local trips to the Poconos to summer camps in Greenland and cruises to the Antarctic.

The first booth I approached was Contiki. I began speaking with Jennifer, who turned out to be the Sales Manager for the Mid-Atlantic Region.

I asked her about whether Contiki trips are good for people who enjoy independent travel.

She handled the question well, selling the fact that sometimes it can be nice to relax and let other people worry about managing logistics.

After taking two guided trips in southern Africa last year, I could relate.

Every traveler has his or her own personal threshold for dealing with the challenges that can present themselves on the road.

If paying a premium for an organized tour helps someone feel more comfortable exercising his/her passport, more power to them.

As I was talking to Jennifer, I began asking questions about her experiences guiding Contiki trips and working for the company.

I realized the event was more than just an opportunity to discover new travel companies and advertise my blog.  It was a great chance to speak with people in a variety of jobs which all fall within the travel industry.

I collected her card in addition to giving her mine, as she was open to fielding future job-related questions from me.

My next memorable visit was with the founders of Great Beyond Adventures.

Their booth was the antithesis of the convention strategy.

In the name of eco-awareness, they didn't even have a stack of catalogs for visitors to take away.

I began talking with one of the guides about my adventures in Nepal last year, and he mentioned a future expedition he may be taking to Cho Oyu, the 6th tallest mountain in the world (with a view of Mt. Everest).

I forgot how the topic of Ethiopia arose, however, I expressed my interest in visiting.

It turned out that John “JR” Ricci, the company's founder and executive adventurer just returned from a trip there.

When John returned to the booth, he relayed a few of his experiences visiting remote tribal villages. Now I definitely wanted to go! 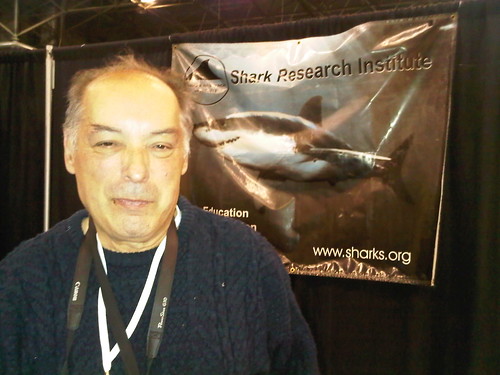 I stopped by the Globe Trekker booth where I spoke with one of the two women who work on the show from the US office, based in Los Angeles.

I signed a “no finning” petition at the Shark Research Institute booth, where I encountered an extremely passionate shark photographer (pictured).

I felt bad walking away, but after 10-15 minutes of politely listening, I could tell he wasn't going to stop relaying shark stories like machine gunfire.

I had been asked via Twitter to pet a dog at the show, which made no sense to me until I saw an adorable pair of husky puppies with Oswald “Newton” Marshall, a musher for the Jamaica Dogsled Team.

In case you are wondering, the team trains out of Minnesota. They plan to compete in the 2010 Iditarod.

And somewhere in the middle of all this, I met Maggie Soladay, a professional photographer, by the zip-line.

I was just about to respond to her latest direct message via Twitter when she noticed me standing all of 2-feet in front of her. I really suck at this, I thought!

Maggie recently returned from guiding a trip to India with SalaamGarage, “a citizen journalism organization that partners with International NGOs and local non-profits.”

I found speaking with her to be incredibly inspiring.

As I shared some of my own travel tales, she offered encouraging feedback that I had stories that could be further developed in the interest of being published.

For the rest of the weekend, I started to see how some of my favorite stories from the last year and a half could take on new life if I properly put together pitches for the right publications.

She also gave me another reason to chuck my Blackberry in favor of an iPhone, in the form of a mobile application for Tweetdeck.  Very cool, and much more efficient than what I'd been doing.

(Note:  I've since installed UberTwitter but it's not the same).

All in all, if you are passionate about travel, I believe you'll find at least one booth at the Adventures in Travel Expo which will be worth your time.

Otherwise, you can use it as a networking and promotional opportunity like I did, or simply a reason to meet up with the local travel tweeters in your area.

Yeah those lines were good...I didn't have a National Geographic coupon to waive it. Once inside, I was faced with a massive room filled with booths highlighting everything from local trips to the Poconos to summer camps in Greenland and cruises to the Antarctic.

Thanks for stopping by and reading!

I really found this post interesting. Keep it up!