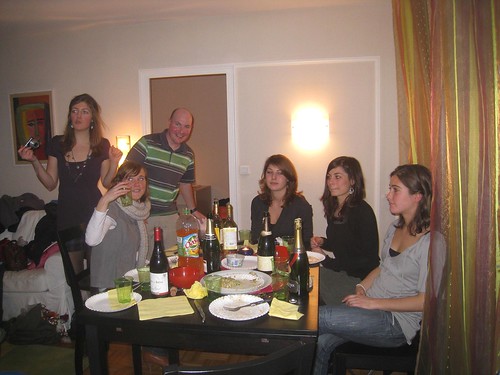 On the last day of 2008, I slept late before heading off for a quick visit to the Paris' modern art museum, the Pompidou. In 1998, it had been closed for renovations. I had just enough time to visit the temporary exhibitions, the most noteworthy being on the development of Futurism in Paris around the turn of the 20th century. As I suspected, there were great views of the city from the unique series of escalators which rise up along the facade of the building.

Laura met me at the exit of the museum and we went for a quick walk past the Louvre to the Pont Neuf (bridge), before picking up some wine, vodka, and frozen quiche at the supermarket. We made our way to her friend Alice's apartment a few metro stops away. It turned out to be a girls-only pre-party. I must have looked like a deer in the headlights because the first comment I heard from one of the girls was ” not to be afraid.”? Thankfully, I had already met several of them the first night. But that can only do so much when there is a language barrier. Laura continued to be a good host, translating the more interesting conversations so I wasn't always in the dark. I'd never seen so many quiches in my life. Laura said they were quick and easy to prepare, and a good alternative to pizza which was considered fast food. Several bottle of fine French champagne were also uncorked. I tried at least three different kinds, each with its own distinct flavor. 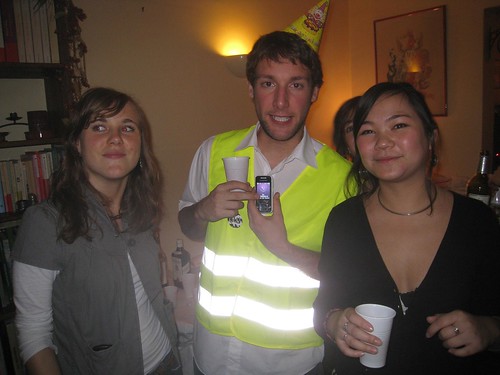 Around 9:30pm, we split up into two cars and drove south toward the suburbs where a house party was already in full effect. As we drove, my fear for the night materialized in the form of an urgent need to use the toilet, the result of an ongoing intestinal bug picked up in Egypt. I alerted Laura to my first priority once we got to the house. Embarrassment took a back seat to King Tut's revenge, and I barged my way into the first floor bathroom within a minute of our arrival. Ten minutes later, I emerged, and began to talk with a guy named Pierre who had learned English during a school year abroad in Nashville, TN. Small talk ensued with whomever I could find who spoke sufficient English. After a second trip to the bathroom, I felt good to start drinking more of the wines which had been brought by guests, red, white, and champagne.

At midnight, everyone began to wish each other a happy new year (bon anne in French) by doing the double cheek kiss. From the small, first floor balcony, the Eiffel Tower could be seen all lit up in the distance. Fireworks were heard, but not seen. Inside the house, everyone continued to party, and there was a bit of dancing too. The music was constantly changed as songs were played from individuals' iPods and the host's laptop. Given the French people' dislike of English, I was surprised to find they know the words to Britney Spears songs! 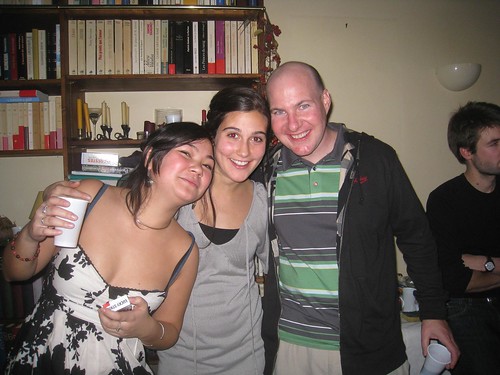 By 2:30am, I was tired, and ready to go, so I hoped we would leave sooner than expected. Since Laura thought we'd need to take the train back, and it didn't start running until at least 5am, the plan was to spend the night at the house. Instead, we lucked out and the two girls who drove our group to the party, were ready to drive home by 4am (I think).

Whether it is New Year's Day, or any other day, I love to sleep late. Laura spent the afternoon packing for her impending trip to Cambodia while I tried to stay out of her way. She let me spend one more night in her apartment, even though she was on a plane to Bangkok. I was so tired, I stayed in and played around on the internet before going to sleep early.

happy new year to all the readers here!

merry christmas and happy new year.wish you have a good time.