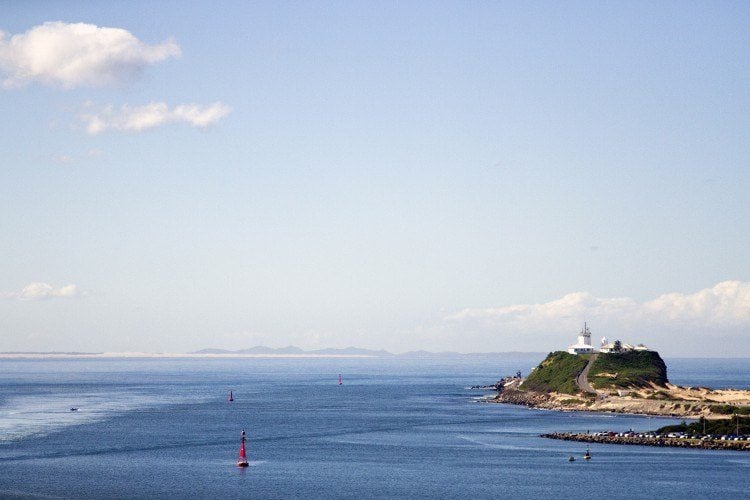 The Lighthouse at Nobbys Beach

Two hours north of Sydney lies a smallish coastal city called Newcastle. In 2011, many people across the country and worldwide were surprised by its inclusion on Lonely Planet's top ten cities list.

All but the locals, of course.

So, what is it exactly that makes Newcastle, Australia stand out above any other smaller cities on the East Coast?

It has predominantly been used as a rest stop on the way to better-known places such as Byron Bay and Coffs Harbour.

However, you'd be doing yourself a disservice if you didn't allow a couple of days on your itinerary to properly explore this charming seaside city.

1. Soak up the Sun at the Local Beaches

Australia boasts some of, if not the most beautiful beaches in the world in my opinion, which I'll admit is anything but humble.

There are six official beaches near the city, along with Stockton beach, which is accessible by ferry across Newcastle Harbour.

Two of the main beaches (Merewether and Newcastle Beach itself) feature ocean baths – where you can swim laps, or drift around to your heart's content.

The Bogey Hole is a man-made pool that was cut out of ocean rocks by convicts in 1819, for the personal use of Lieutenant-Colonel James Thomas Morisset, the Commandant of Newcastle at the time.

It was named after the indigenous word “to bathe” and is frequented by locals all year round.

Susan Gilmore can only be accessed at low-tide by rounding the cliff face that borders the city and, as a result, draws smaller crowds than the other more popular beaches.

It has consequently developed a reputation as a nudist beach for liberal sunbathers.

As far as views go, you can't beat Nobbys Beach, which boasts both a lighthouse and a boardwalk that makes for a pleasant and popular place to take an afternoon stroll.

You may have already heard of Nobbys – it made international headlines in 2007. In a time when the area was suffering from horrific storms and flooding, a Japanese coal carrier known then as the Pasha Bulker was washed up onto the beach, to both the astonishment and consequent amusement of locals. 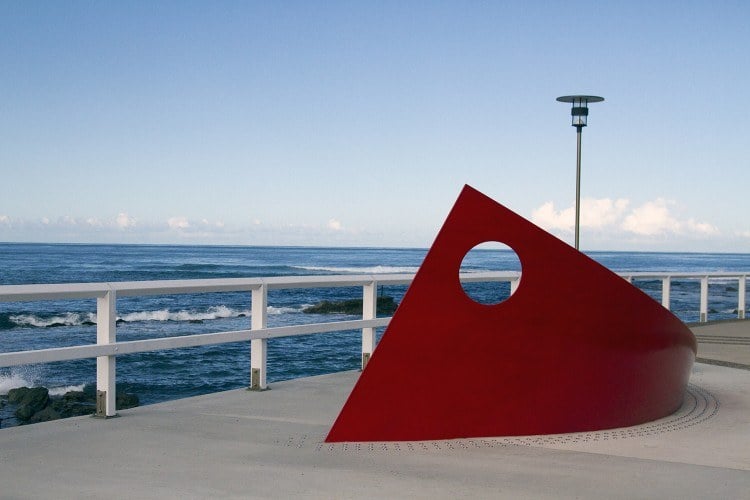 A relic of the Pasha Bulker – this sculpture is comprised of the carrier's rudder.

2. Ogle at the Biggest KFC in the Southern Hemisphere

There is a reason that this KFC is an attraction worth mentioning. This particular fast-food restaurant was built on the site of the Palais Royale.

Famous throughout the town, the Palais, which was built in the 1880s, went through many incarnations during its time – from a ballroom, then a dancehall and finally as a nightclub.

It was declared structurally unsound in 2007 after the storms mentioned above and was demolished the next year, to the disappointment of many locals.

More interestingly still, as the site was being prepared, archaeologists discovered 5,700 Aboriginal stone tools, which dated back some 6,500 years.

Unfortunately, a report detailing this area as one of “high to exceptional cultural and scientific significance” was not released until after construction of the KFC was completed.

So, revel in the chance to gaze upon and maybe even chow down a burger within an institution that sits on a little piece of Australian history, in more ways than one. 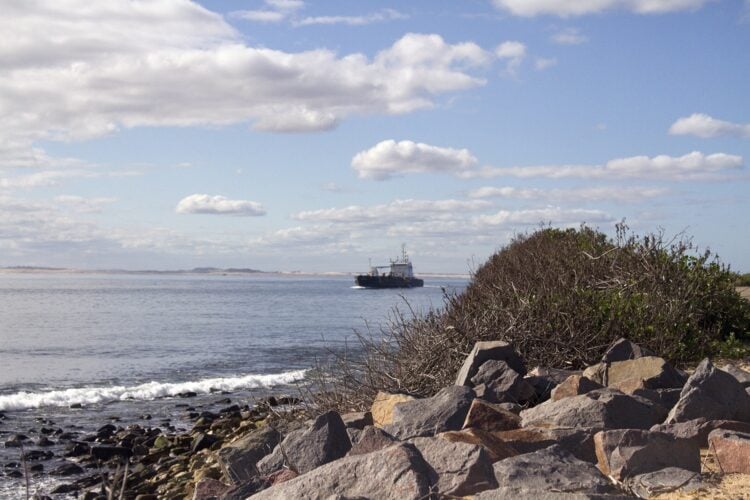 A boat pulling into the harbor

3. Immerse Yourself in a Thriving Art, Music and Food Scene

Newcastle is a town that is notorious for bouncing back.

It recovered from a damaging earthquake in 1989, an Australian-wide recession in the 1990s, the closure of the local steelworks (which was the primary source of Newcastle's economy) in 1999 and two rounds of devastating storms, in 2007 and 2015 respectively.

One of the more recent issues was the decline within the city CBD (Central Business District), after the opening of two massive shopping centers nearby. For some years, the city center stood empty. Businesses were closing up shop and buildings rotting away due to disuse and weather damage.

Then, in stepped an organization known as Renew Newcastle, whose purpose was to find short-term uses for empty buildings in the CBD.

Their aim was to source “artists, cultural projects and community groups to use and maintain these buildings until they become commercially viable or are redeveloped.”

For a small amount of pay, small businesses and those seeking community spaces could rent out and repurpose these buildings that were otherwise standing empty.

As people began to once again populate the CBD, life was breathed back into the area.

All over town, there are new restaurants, cafes, clubs, speakeasy's, and music venues opening every week.

Newcastle CBD continues to grow in popularity, making it the hustling hub it once was and deserves to be.

4. Get a First-Hand Look at Australian Culture

Sydney and Melbourne are well worth a visit, but these are, after all, massive, sprawling, multicultural cities.

Although they are wonderful and, I would never hear or tolerate a bad word against them… it's hard to get a feel for the “real” side of Australia if you limit yourself solely to either or both of these cities.

There are many facets of Australian culture, as it is, of course, a rather large country with a diverse landscape.

You'll find cities and towns all over – from the coast to inland, the tropics, dead center and the most northern and southern regions of the continent.

The capital of Western Australia, Perth, has the fourth biggest population in the country, despite being the most remote city in the world.

We also absolutely cannot forget those living out their lives in the Indigenous communities in the outback.

However, the majority of the population is concentrated along the East Coast.

A visit to Newcastle will provide you with an example of how most ordinary, everyday Australians live, without having to venture too far from Sydney. 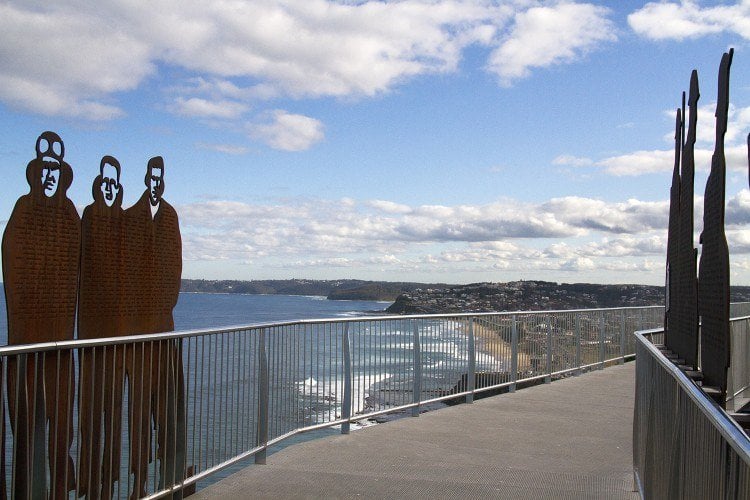 5. Learn a Little Something About Local History

Few may know that Newcastle once had the largest tram network in Australia, rather than Melbourne.

The system was dismantled in 1950, yet Newcastle’s Famous Tram (on wheels) is still running around town, offering a one-hour guided tour of the city and its history to visitors.

On the 8th of June 1942, a Japanese submarine laid an attack upon Newcastle.

This was the only time the guns of the city's coastal defense base Fort Scratchley were fired.

The Fort was vacated by the Australian Army in the 1970s and is now a museum.

Visitors can take a paid guided tour or can explore the site above ground at no cost.

I recommend stretching your legs by journeying across the Anzac Memorial Walk, which was opened in 2015 to commemorate the 100 year anniversary of the landing at Gallipoli in Turkey during WWI.

At each end of the bridge are silhouettes of returned services personnel and the 3,859 family names of the men and women of the Hunter Region who served in the war.

Not to forget stunning views of nearby Bar Beach and the city to the west.

In summary, Newcastle is rad. If you have the opportunity to add it to your Australian itinerary… do it. You won't be disappointed.