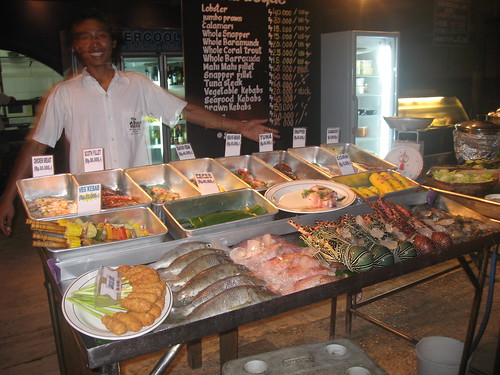 After a short walk along main street on Gili T, Linus and I washed up and headed out for dinner. We noticed the most crowded restaurant to be The Beach House, so we headed for a table – well Linus did. I stopped short, next to two Danish girls. I looked at Linus, then at the girls, figured what the hell, and asked if we could join them.

After getting to know Ann and Ulee a bit over dinner, Linus invited two English girls at a nearby table to join us as well. Jessica and Laura were soon in the mix. As laughter and good conversation ensued, one of the guys I noticed from the ferry ride asked if he could join us. Tim and Ashlyn were soon at our table, and Tim returned the favor by inviting an American woman over, just as she was leaving her table. 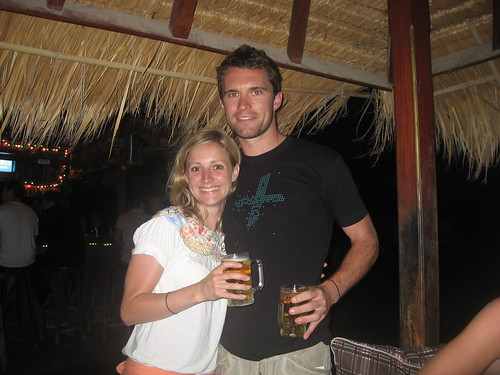 Forming new friendships while traveling alone can really be this easy, when good times seem to materialize out of thin air. We'd spend the night getting to know one and other. Linus had a life-or-death experience surviving the 2005 Tsunami in Thailand (a story that had the entire table in awe). The Danish girls were leaving the next day. Jessica and Laura had arrived a few hours earlier than Linus and I . Tim was a professional soccer player with Wellington, NZ's team (part of the Australia A-League) and had lived in Richmond, VA during his college years. His wife Ashlyn had just finished a 5-year run as a dancer with Riverdance, and had a great opinion of Wolf Trap, the amphitheater where I saw the show in 1999 (Fairfax, VA). And the American woman was a trauma surgeon from NC.

And every now and then you just click with certain people, and amongst the lot, Linus and I would click with Jessica and Laura. Good times would be sure to follow.