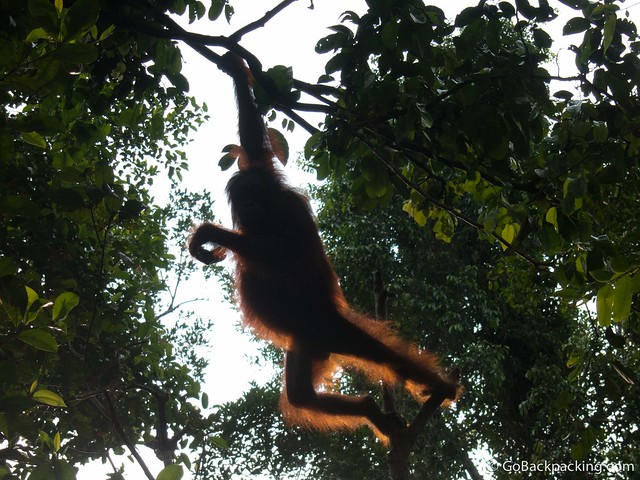 The silhouette of an orangutan, swinging from tree to tree, in Tanjung Puting National Park

This is the first installment of a three-part series.

Looking deep into their eyes, knowing you as a homo sapien share 97% of the same genetic code as them, it's hard not to feel a kinship with orangutans.

The endangered orangutans in Borneo first entered my consciousness when I met Gela, my Dutch trekking partner in Nepal.

I remember seeing a photo of her sitting next to one of the large, orange-haired primates, and knowing then that I wanted to see them too.

Borneo, the commonly known name of the Asian island shared by both Indonesia and Malaysia, has always sounded extraordinarily exotic to me.

My mind conjures up challenging travel conditions, thick jungle, machetes, and remote wilderness. In short, I'd built up a trip to Borneo to be a chore, and surely an expensive one to boot.

But so many of my preconceived notions about travel to Borneo, specifically to see the wild orangutans in Tanjung Puting National Park, were smashed during my 3-day visit last month.

Commercial tourism has arrived in Borneo, and while it requires an adventurous spirit, it's a surprisingly easy experience for travelers of all ages and budgets.

This is not something I can say about visiting the Mountain Gorillas in Rwanda, which requires $500 for the trekking permit alone (as of 2010). 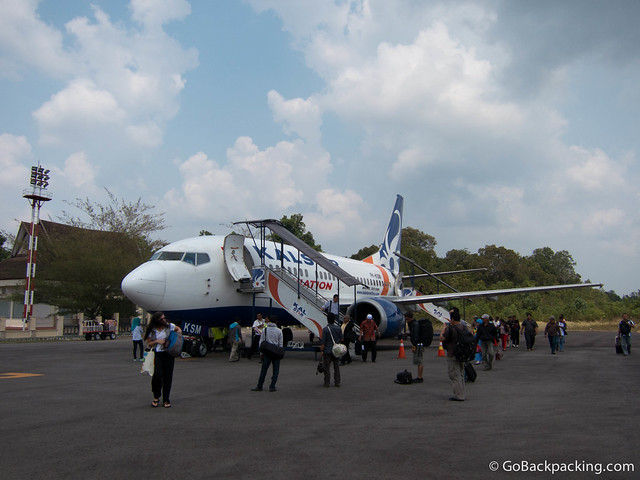 Disembarking our Kalstar flight upon arrival in Borneo

My journey began in Jakarta, where seven other international travel bloggers, and I met with representatives from the Ministry of Tourism and Creative Economy of Indonesia.

Visiting the orangutans in Borneo was to be our first stop on a two-week tour of the country.

We departed Jakarta's International airport for Pangkalan Bun on Kal Star Aviation, an Indonesian airline in operation since 2007.

The flight time was just one hour, and they even provided us with a snack.

The proliferation of flights offered by regional and discount airlines in Indonesia is helping to improve accessibility to the country's more remote islands.

We landed at Pangkalan Bun's little airport and exited the plane directly onto the tarmac (a process I always associate with landing in remote areas).

Inside the terminal, I saw the world's smallest baggage carousel. It wasn't even a full circle, but a straight, 15-meter conveyor belt extending from a hole in the wall.

Despite the regular flights, it was good to see the growth in tourism had yet to necessitate a bigger baggage delivery system. 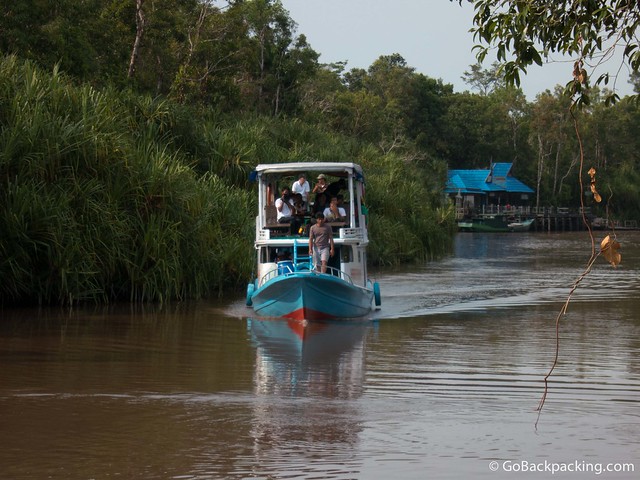 One of our klotoks, a traditional wooden boat used for transport along the rivers

Adapting to Life on a Klotok

Upon exiting the airport, we jumped into air-conditioned SUVs for the 20 to 30-minute drive to the river dock where we'd be boarding our klotok.

Klotoks are the traditional wooden boats used to navigate the local rivers.

Due to narrow sections and areas of shallow water, the maximum width of a klotok is 4 meters (12 feet).

The standard klotok is two levels. The lower level features the bathroom (with Western-style toilet), crew quarters, and “kitchen” where the food is prepped and cooked. 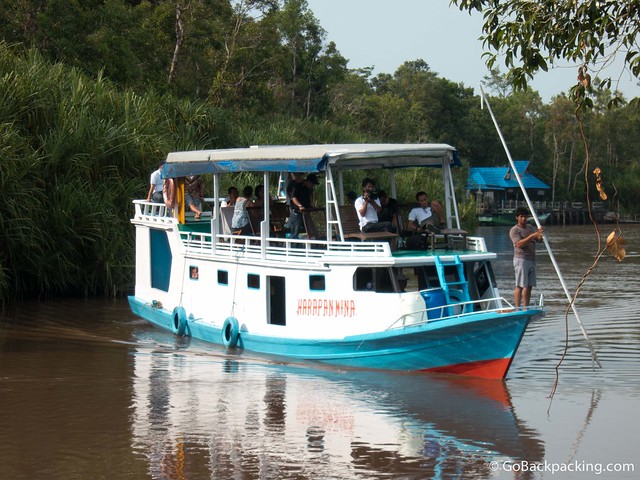 Profile view of a klotok

Some larger klotoks also feature showers and air-conditioning, though the generator required to try to keep guests cool creates noise pollution, thereby drowning out the sounds of nature in the evenings. If given a choice, skip any attempts at air-conditioning, which will probably increase the cost, as well as the noise.

The upper level is for the guests, where the meals are taken, and sleeping mattresses (with mosquito nets) are laid out at night.

We quickly adapted to life on our klotoks. Our group was large enough to require two, as they can carry four guests each.

There were other klotoks and tourists on the river, of course.

The majority of the ones we saw were occupied by couples, though there were families, and what appeared to be the occasional group of backpackers too. 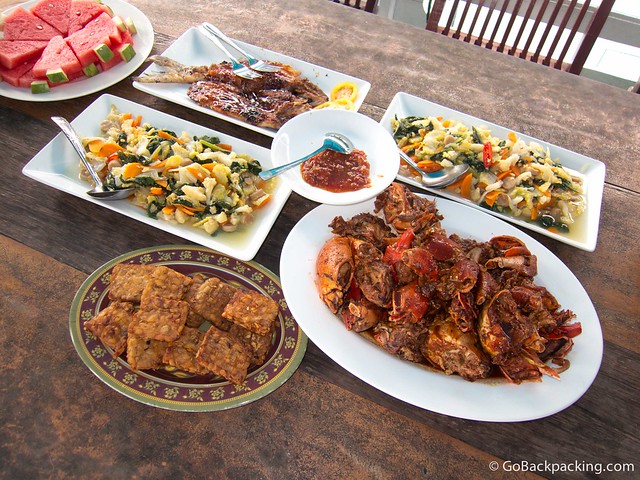 A group of women on one of our klotoks was responsible for preparing the food during our two-day trip.

Given the small working conditions, we were all impressed with their ability to consistently turn out excellent meals.

It reminded me of the time I went trekking in northern India, and experienced some of the best food in the country, all prepared in a rock cave barely big enough to fit four people.

Our first lunch set the stage for the meals to follow: fresh crab and fish, vegetable salads, soybean cakes, and fresh watermelon.

In addition to the meals, every time we came back to the klotok from observing the orangutans, there'd be a snack, such as fried bananas, waiting for us.

Cold beverages were also a treat, with Coke, Sprite, and bottled water on offer.

Due to religious reasons, beer is not available on the Indonesian side of Borneo. 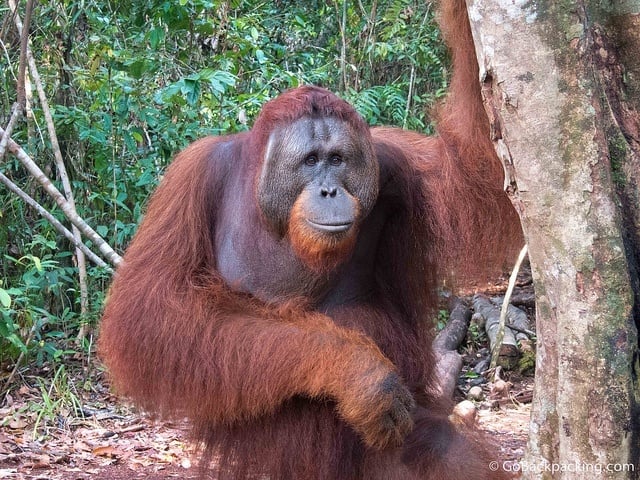 After a few hours of riding upriver in our klotoks, and enjoying a fresh seafood lunch, we crossed back onto land to observe the first of three orangutan feedings.

Park rangers established these feedings for the local orangutans to ensure the population remains strong and healthy.

If no orangutans show up, it's a positive sign, because it means they're able to find enough food on their own.

If they do appear, then they gobble up a plentiful supply of bananas and vitamin-fortified milk.

Of course, tourists don't appreciate it if none appear, but as long as you avoid the first few months of the year, there's a high probability you'll see them every time as we did. 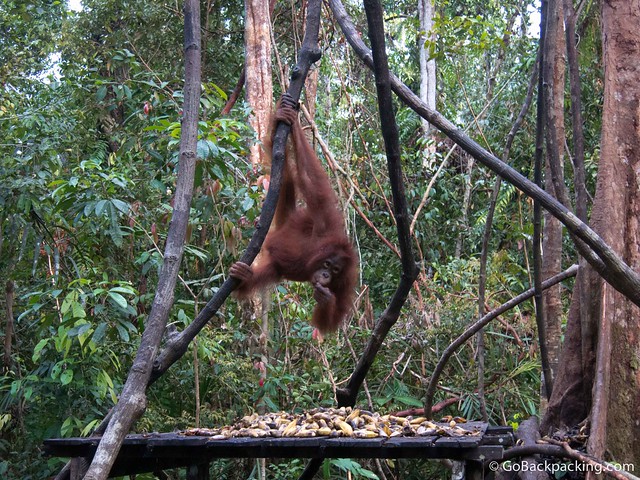 An orangutan grabs bananas provided by the park rangers

It was a fascinating experience to be in such proximity to them, as they went about their daily business.

We were the last of the tourists to arrive at that particular camp, so a few dozen other people, who'd already taken their photos, were still around.

A few of these people were especially loud, to the point where I asked them to keep it down.

The look of disbelief on their faces was unforgettable, but I didn't care.

I was annoyed that they were carrying on as though they were drinking cappuccinos at a Starbucks.

Ultimately, it's up to the guides to ensure their customers are respecting the environment, orangutans, and other visitors around them. 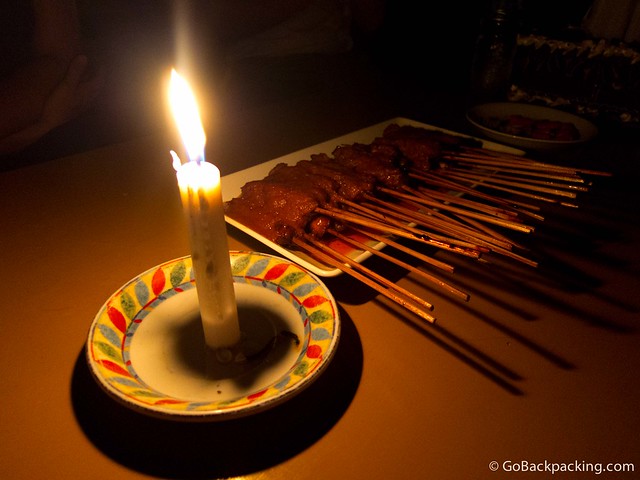 Dinner was taken back on the klotok, after we motored further upriver, past the other boats, to the dock of the second camp we'd visit the following morning.

There, the tables and chairs were moved to the old, wooden structure, and we ate by candlelight.

The chicken satay was popular with everyone, and amongst the best we'd eat during our two weeks in Indonesia. 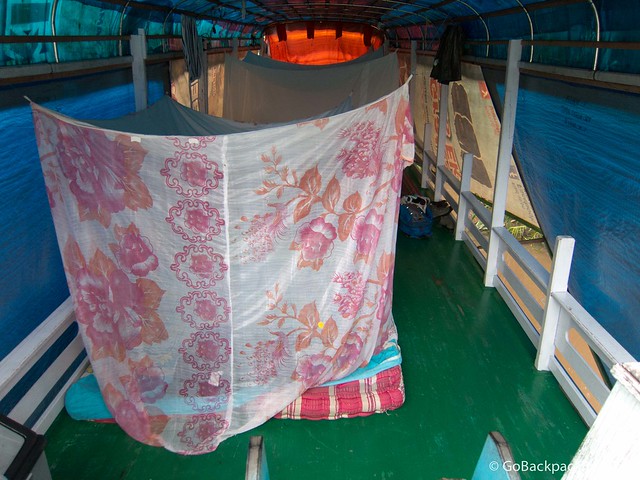 The guests sleep on mattresses on the top deck, while the crew is down below

As we were eating, the crew was setting up our beds and mosquito nets for the night.

It may not look like much in the photo above, but I and most of the others slept surprisingly well.

The nets kept the bugs out, and the tarps blocked the three kinds of poisonous snakes, and crocodiles, from boarding our vessel.

The orangutans spend their nights sleeping in nests built in the trees.

They build a new nest every day, a process which can take 20 to 30 minutes (which sounded fast to me, but if you're doing it every night, you must get good at it).

In the morning, I would awaken to a sweet surprise.

This is the first installment of a three-part series. Check back tomorrow for part two.

Can I ask who you booked with? And if you toured with a group you gathered or the company put together?

Also last thing..I know their are snakes but are there leeches?? Want to be prepared

Wow! I didn't realize we share 97% of the same genetic code as orangutans. That's pretty cool. The pictures and trip look amazing!

What an extraordinary experience!