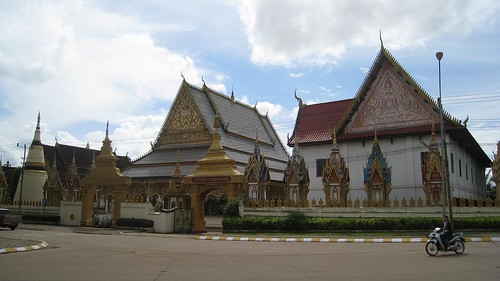 Two nights was more than enough time in Champasak, so the Parisians and I headed for Pakse, the largest city in southern Laos (pop. ~66,000), and a popular point from which to explore the Bolivean Plateau where coffee is grown. After crossing back over the Mekong River via the Frankenferry, it was an hour minibus ride to Pakse. We arrived in the late morning. Celene split away from us ASAP, and I soon split from Nicholas and Caroline when we started to look for accommodation. I took a room, intending to catch the overnight bus to the capital, Vientiane, the following day. 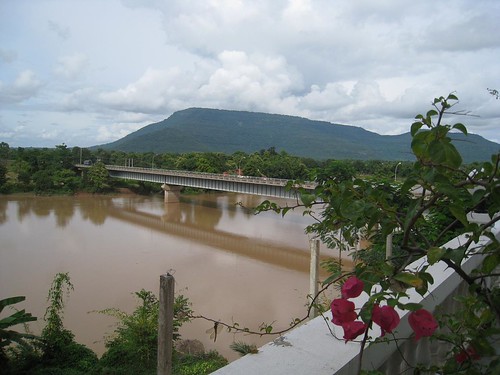 After washing up, I walked around town for a bit, ate a delicious Indian lunch (chicken tikka masala and mint naan), and realized there was little to do the following day if I didn't want to tour the countryside. I decided to take the overnight bus right away. I spotted Nicholas and Caroline sitting down for an Indian meal as I awaited the bus, so I let them know I was forging ahead without delay. My goal was to be in Vang Vieng for my birthday, and I appreciated the fact that Nicholas committed the date to his cell phone as a reminder. 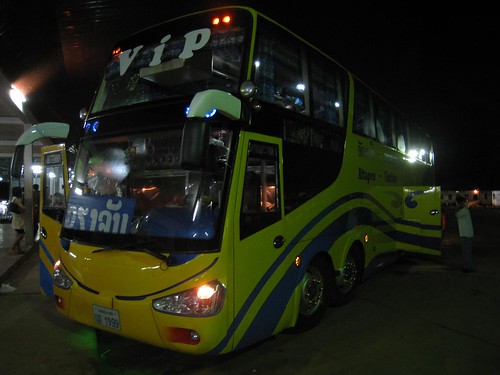 The bus picked me up at 8:30 pm, and I thought I lucked out when I spotted an empty aisle seat in front of the rear stairwell. I learned these seats are great because you can fully recline without concern for a person behind you. In this instance, one concern was replaced by another when the older Lao man next to me took advantage of the space I was creating on the left side of my seat due to my tendency to lean out toward the aisle (and away from him). In addition, the bus' air-conditioning approached Siberian temperatures. Despite a thick (nicely designed) blanket, I cursed the icebox that was our VIP bus.

Around 1:30 am, we stopped for a rest break, and I exited the vehicle to stretch my legs. For some reason, the guy next to me didn't encroach on my seat thereafter. He kept noticeably to his own seat, and I managed to get a few hours of rest. It began to rain around dawn, and pour by the time we pulled into the Vientiane bus station at 7 am. I retained a tuk-tuk, which I thought was for myself, but was then stuffed with 4 soaking wet travelers and their mass of backpacks (and guitar).

My first stop was the Asian Pavilion Hotel which was in the guidebook's midrange section, having been some sort of playground for spies in the 60's and 70's. The single room I saw was dark and smelly. My next choice, the Inter City Hotel, was the editor's pick, and while more costly, it'd provide a long overdue respite from 10 months of budget accommodation.