Dhaka ranks as the second dirtiest city in the world according to a study by Forbes Magazine which I was not aware of while staying with a good friend in his hometown, the capital of Bangladesh. Virtually impossible to escape the city's grasp, I noted my own informal observations of the city's condition, accompanied with anecdotal tales from my Bengali friend.

Even more-so than Bangladesh's number one attraction, its people, I felt in awe of its traffic. The Forbes study actually attributes lead-poisoned air from traffic congestion as the key factor, which continues to worsen with vehicles emitting fatal amounts of air pollutants daily.

It's a long running competition amongst travelers to debate which city in the world has the worst drivers. Aggressive Italians? Old American women? Bangkok's fearless Tuk-Tuk's drivers? I'll confidently cast my vote for Dhaka, Bangladesh.

Although chaotic, it's organized chaos on the barely paved, potholed Dhaka roads, with unofficial rules most drivers choose to ignore, but later accept the hard way. ErrrRRR…crash! 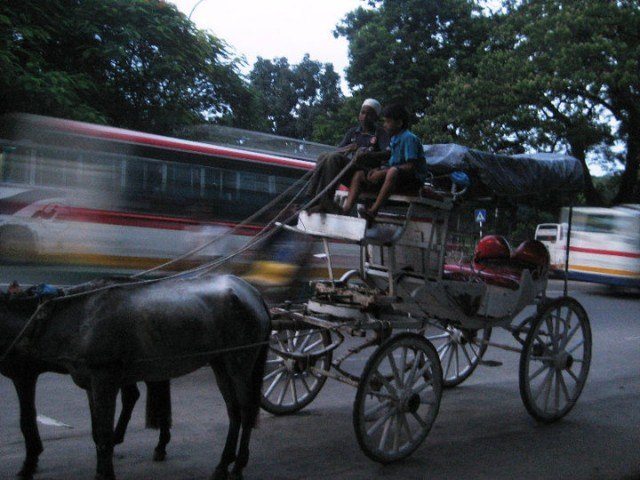 Buses speeding past a lone horse and buggy.

It's common knowledge that buses and trucks always have the right of way. They will utterly destroy anything else on the road that tries to challenge its destined path. But this rule becomes complicated because the bus exteriors are assembled from soldered scrap metal. Therefore the driver cares less about minor crashes that would damage his vehicle.

This arrogance is balanced by the general population's behavior. Hundreds of Bengalis' will focus their rage against the bus driver after an accident, even if the bus driver is not at fault. Hence, the bus drivers fear for their lives because ordinary Bengali pedestrians, car drivers, and rickshaw drivers adapt the mob mentality, eager to each throw a punch at a driver until death. The bus drivers avoid a beating by abandoning the vehicle, escaping on foot, or speeding away given the opportunity. 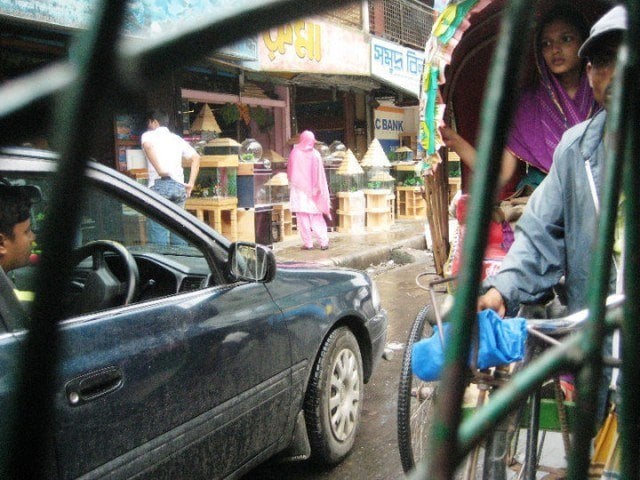 Riding in a C.M.G opposite a private car.

Next are the cars driven by a few middle class people, and also the wealthy private citizens. These drivers act like they own the road, absolutely despising pedestrians, CNG, and rickshaws blocking their way.

While riding in my friend's car we mistakenly, though gently, hit a female pedestrian who actually had the right away. My friend honked, screamed his favorite obscenities, and continued driving while the woman stood expressionless. Private cars will also cut off rickshaws and CNG's whenever possible. 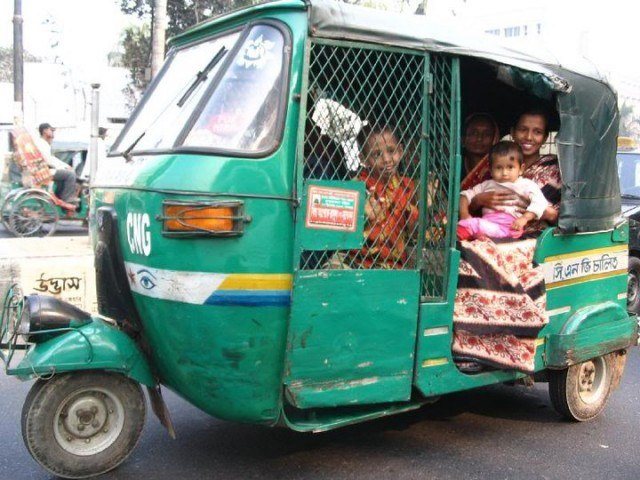 CNG's are actually motorcycles with attached cages built of the same scrap metal also used for bus exteriors. They are small enough to maneuver through the busy streets and common because they are the cheapest form of motorized taxis, as low as US$2 for a 45 minute ride through traffic.

Fun fact. The C.N.G. cages were only recently installed in the past five years due to thieves' mugging passengers. 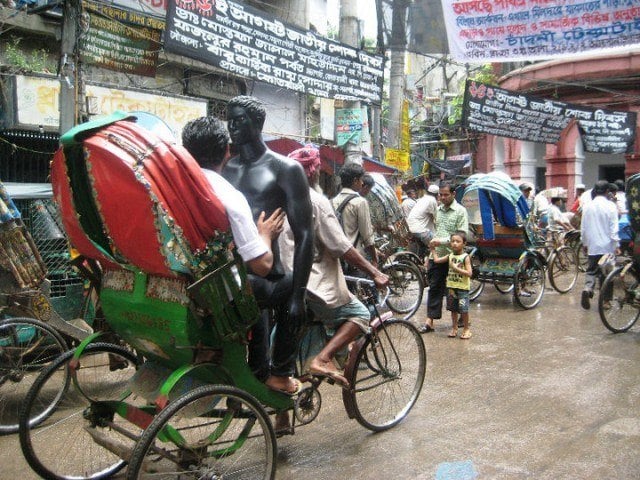 Rickshaws powering through the streets.

Finally we have the rickshaws which are bicycles with carts attached. They are ideal for short distances and even cheaper than the CNG's at US$.25 cents for a 10 minute journey. Keep in mind CNG's charge a minimum price that is far greater than a rickshaw.

Except for pedestrians, the rickshaws are the turds of the road. They drive the slowest and are smaller than most everything else on the road. They stick to one side, except during traffic when they drive like a mental patient in a  straight jacket. 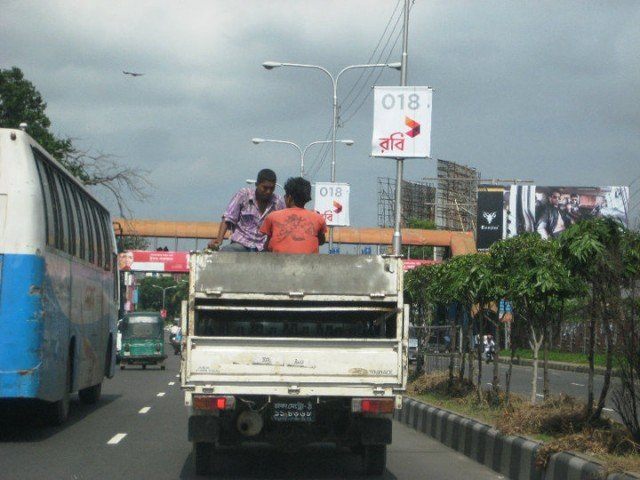 I should also mention there are other vehicles like motorcycles. Riding one of these in Dhaka is suicide. The first time I saw one riding through traffic I made a mental note of how dangerous it looked.

Just ten minutes later, we passed the same motorcycle laid out on the road blocking traffic after a major crash! 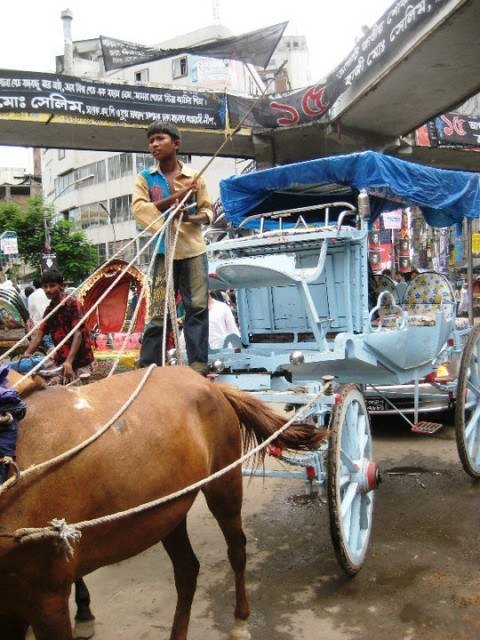 The only times I saw horse and buggies on the road, they had children driving them. It seems like good practice before graduating to a rickshaw! 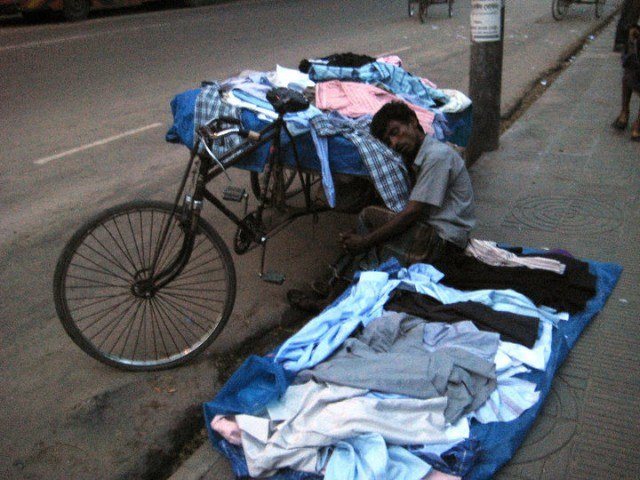 Even lower of the totem pole are bicycles.

It's a slow day at work for this street vendor. After his shift, he will ride his bicycle with the goods attached to the back, trying to survive the endless amount of other bicyclists and drivers doing the same. 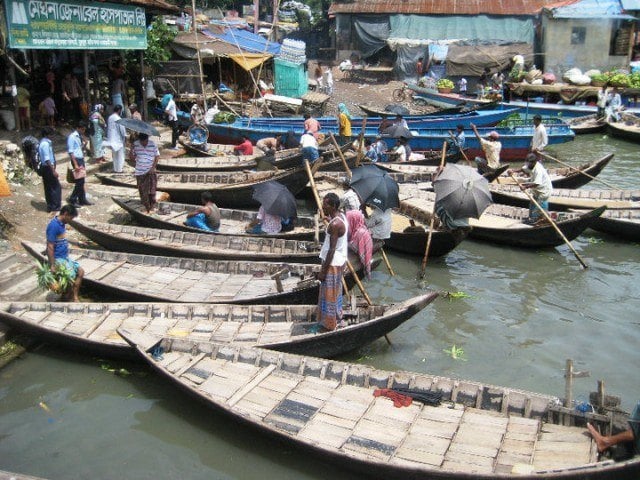 Oh no, it's not over yet. Many Bengali's travel by water through the city to transport products, or just avoid the never ending traffic. 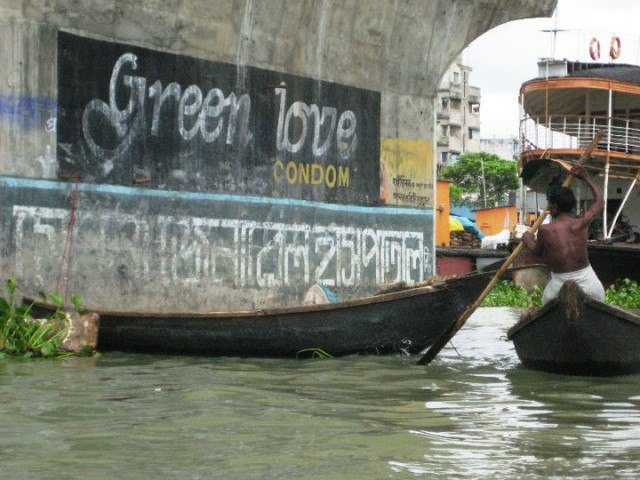 An advertisement under a bridge.

Some people even live under the bridges. Even without a motorboat, it appeared as if one of these paddle boats could arrive at a destination in less time then it would take with road transportation, given there is no traffic. 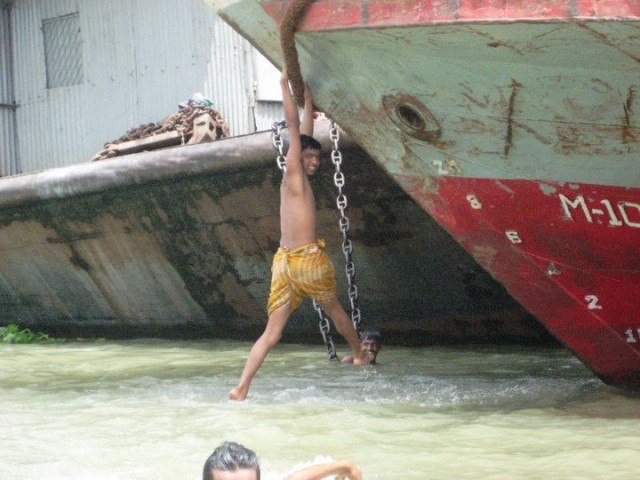 For others the river offered respite or a fun swim.

People are everywhere. It's not just small paddle boats on the river but also some bigger ferries and ships who use the Buringanga River. The river is Dhaka's main outlet of sewage waste and up to 80% of Dhaka's sewage is untreated. Besides sewage, a number of industries spew out their chemical waste into the river.

A paddle boat down the river may be the most dangerous form of transportation in Dhaka.

About the Author: Jason Batansky is a 22-year old location independent traveler running two full-time businesses. His blog, Locationless Living, is a mixture of writing about his sustainable travels and business topics. His latest site is Flashpacker Guy.

mm.. Forbes must have got it wrong, Dhaka and Bangladesh banned leaded gasoline back in 1999/2000 (and there is no opportunity for corrupt practices as there is only one refinery and the rest is imported). The air pollution is very bad, no denying it, but not due to lead. also, horse buggies are as rare as rickshaws in london!

Its been a while but I did really only notice the horse buggies in the old town.

Loved the post. Many things covered yet many things are left. Sad but true is our traffic jam is some time so huge that we have to wait in same place more than 30 minutes to move ahead. Some time when government VVIP official moves around or political gathering goes on, police close some roads for some time or for whole day and those days are most chaotic. Was expecting a photo of Traffic jam :)

We can improve a lot if our government wants, but unfortunately our government is the main source of corruption. We have the biggest sea beach in world and the largest mangrove forest. Dhaka is the 9th largest city on earth. However, due to lack of proper management our city and those spots have been losing its heritage. Travelling Bangladesh is not less than winning something precious. But if you don't have patience then you are not suitable for BD.

Nice being going to your blog once again, it has been months for me. Nicely this content that i've been waited for so long. I need this piece of writing to comprehensive my assignment inside college, and it has exact same subject together with your article. Thanks, good share.