Taking photos of cute dogs in exotic places is a favorite subject of mine.  Oftentimes, they can be seen lazing around on beaches, mountains, or city sidewalks.

I imagine a dog hanging out by the pyramids in Egypt has no sense of how amazing the surrounding scenery is to us humans around the world.  He or she is simply focused on the daily essentials of a dog's life:  water, food, sleep, human attention, and sex for all those non-fixed dogs.

This photo essay is dedicated to Tobias, my Colombian roommate's old, black, arthritic Labrador, who lies quietly around the apartment, keeping me company as I work. 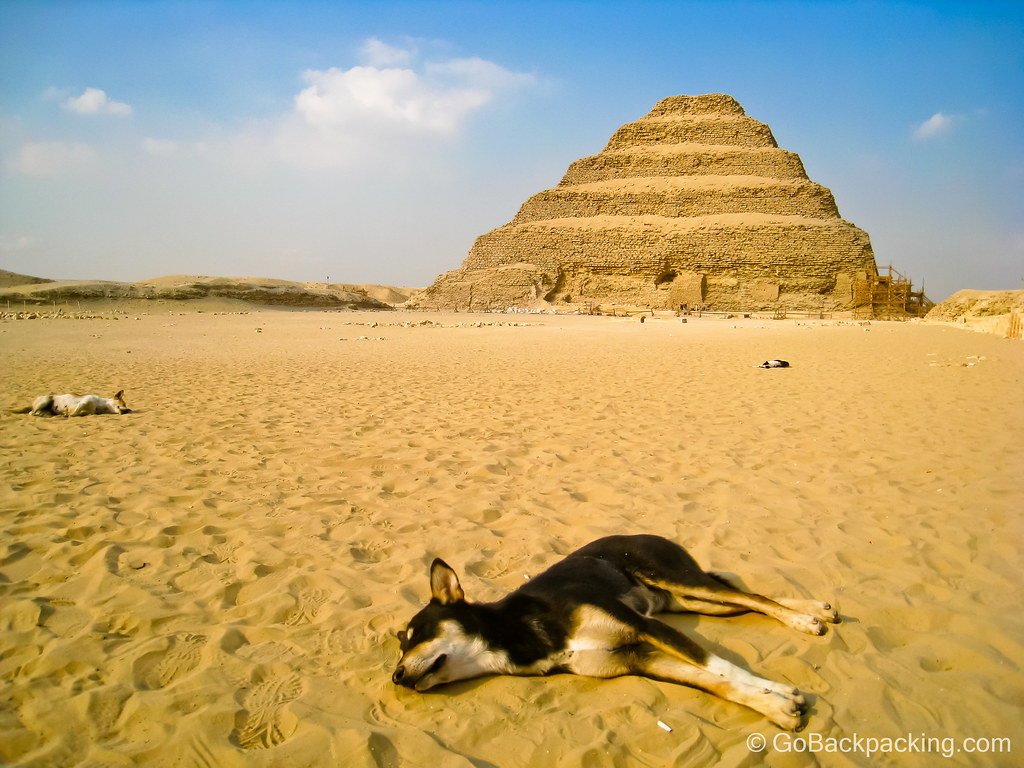 Dogs lounge in the sand around one of Egypt's oldest pyramids. 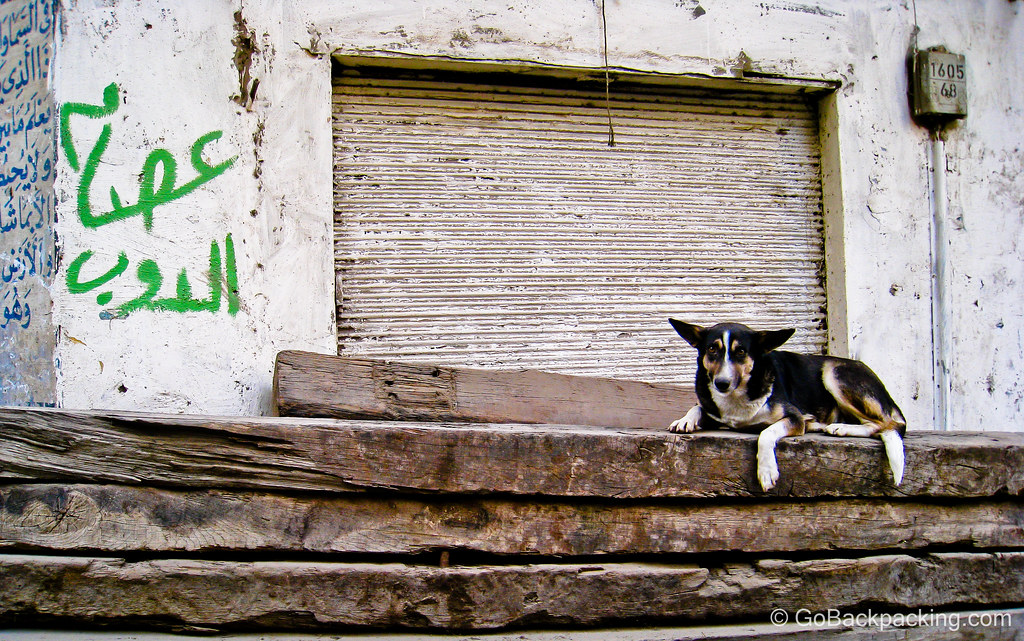 I came across this dog while walking through Old Islamic Cairo one afternoon. I like the way he is perched atop a pile of old wooden beams, watching everyone that passes by. 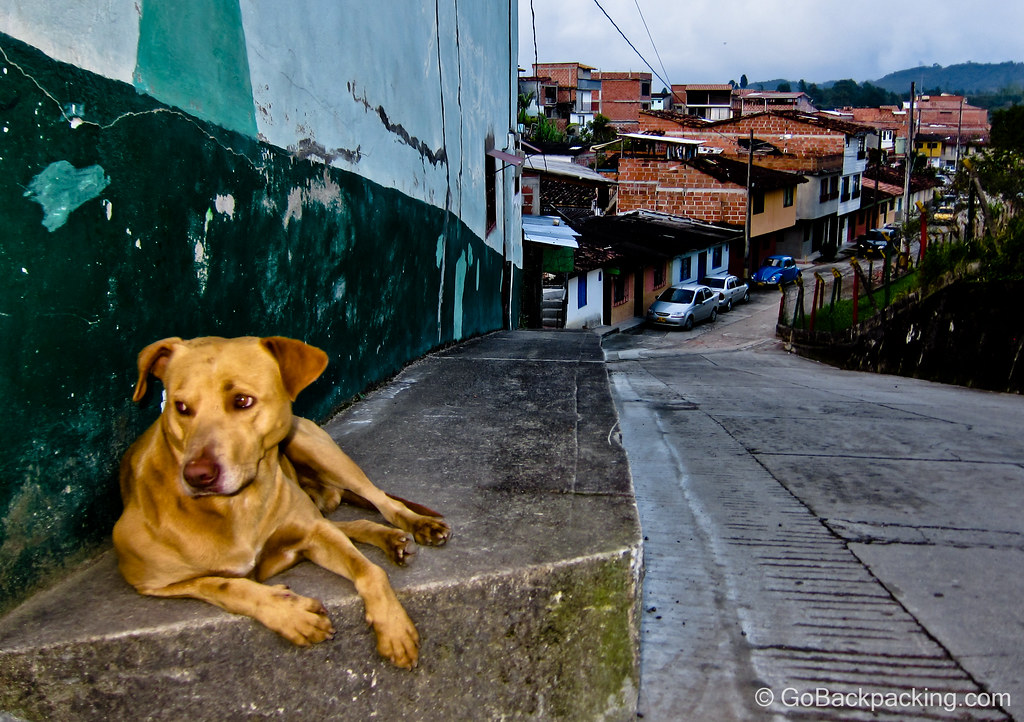 In the later afternoon, I was walking back to the finca where I was staying in the Colombian pueblo of Guatape, when this dog perched atop a hill caught my eye. I found the painted wall behind him especially striking. 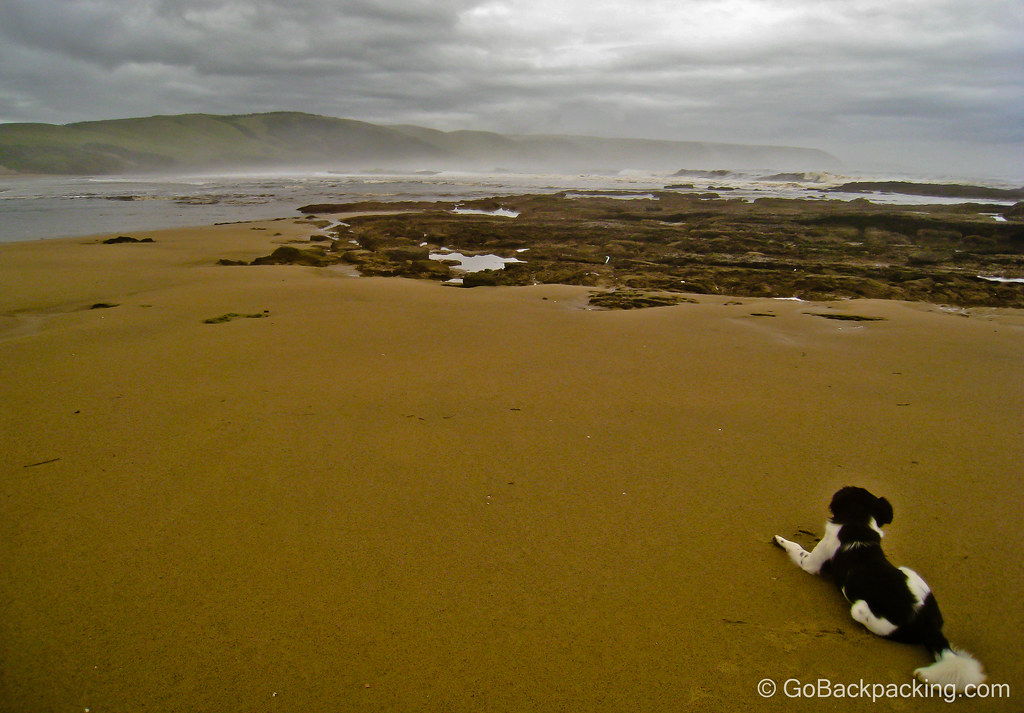 My first morning in Bulungula, on South Africa's Wild Coast, I woke up early and walked to the beach to watch local fisherman at work. I shot this photo from behind the dog, pretending to capture the view from his perspective. 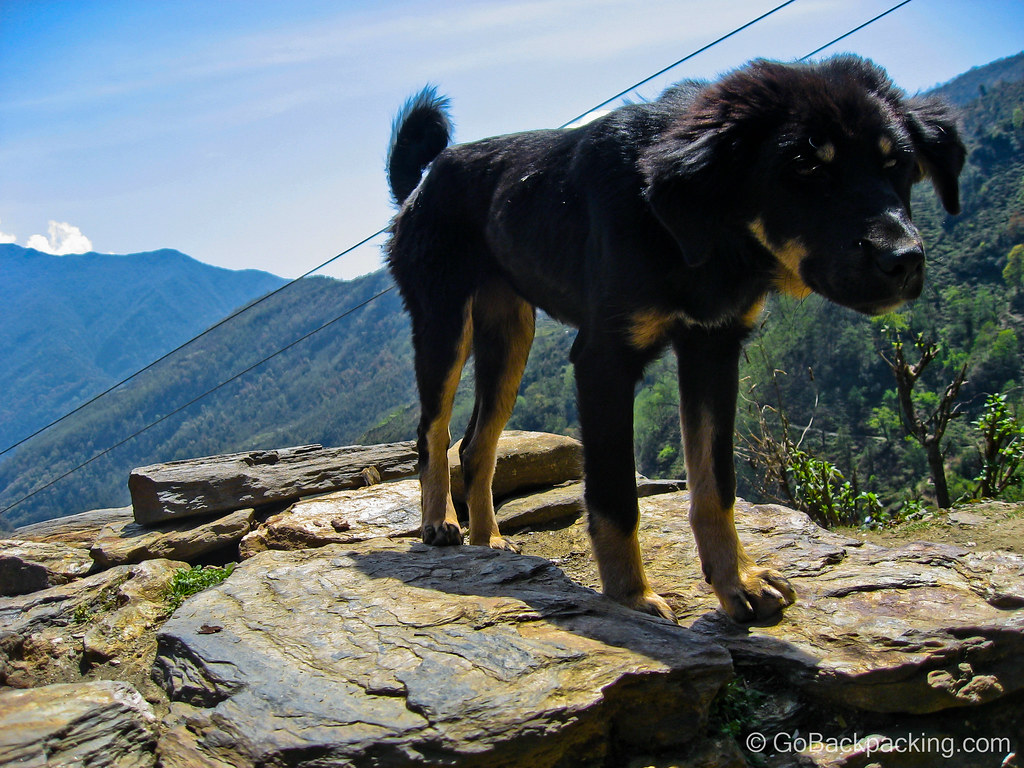 It takes a strong dog to hang out all his life in the high altitudes of Nepal's Himalaya. I encountered this puppy at about 3,000 meters above sea level on the Annapurna Sanctury trek. 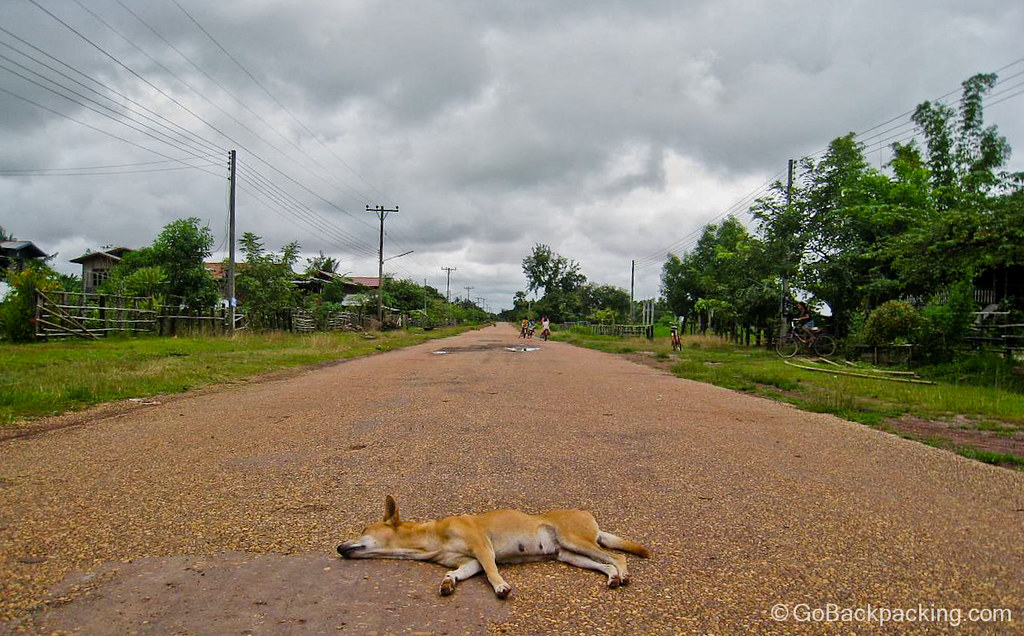 During a bike ride in southern Laos, along some quiet streets, I happened across this dog without a care in the world. 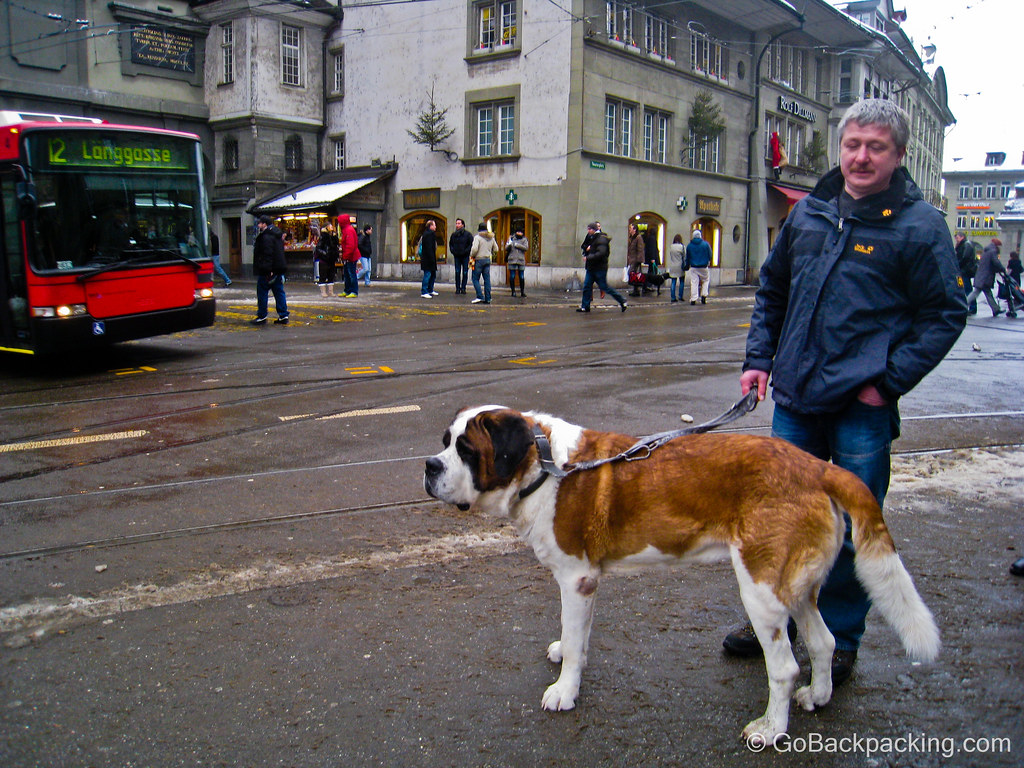 While walking around Bern, Switzerland, I couldn't resist asking this man if I could snap a quick photo of his Saint Bernard. 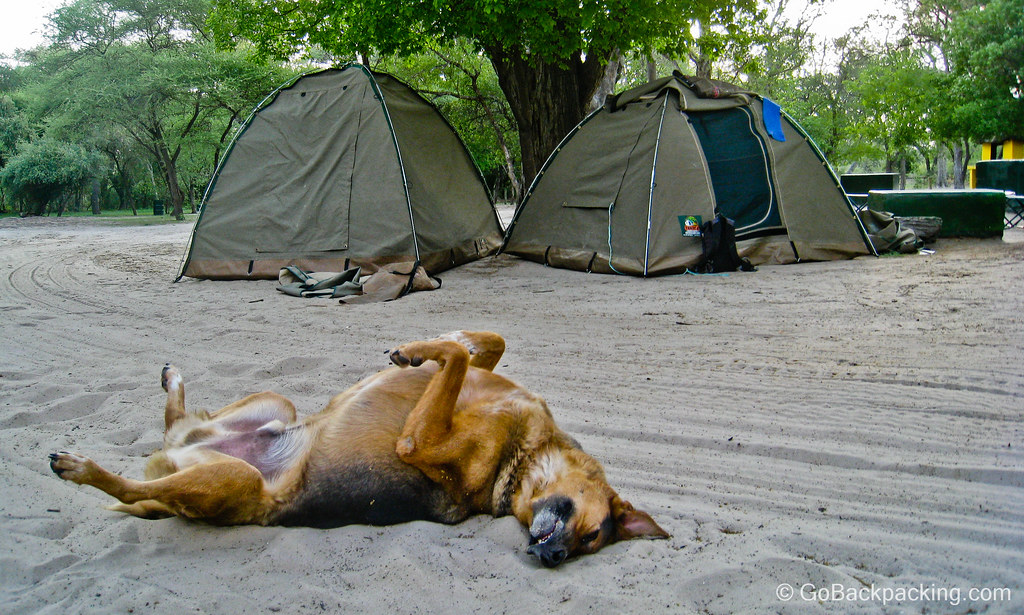 This dog was hanging around our campground outside Maun, Botswana. Either the dog is trying to scratch an itch, or he's looking for a belly rub! 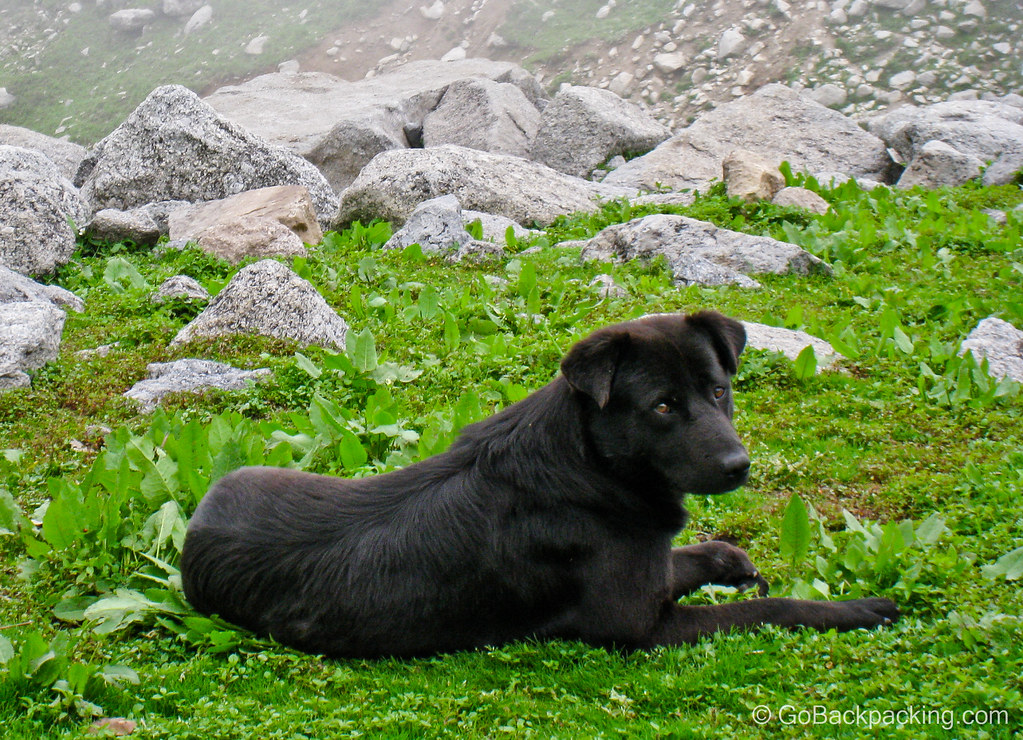 This beautiful black dog befriended us on our 3rd day of a trek to 4,330-meter Indrahar Pass in the mountains north of McLeod Ganj, India. On our 4th and final day, he accompanied us an hour or so back down the trail. 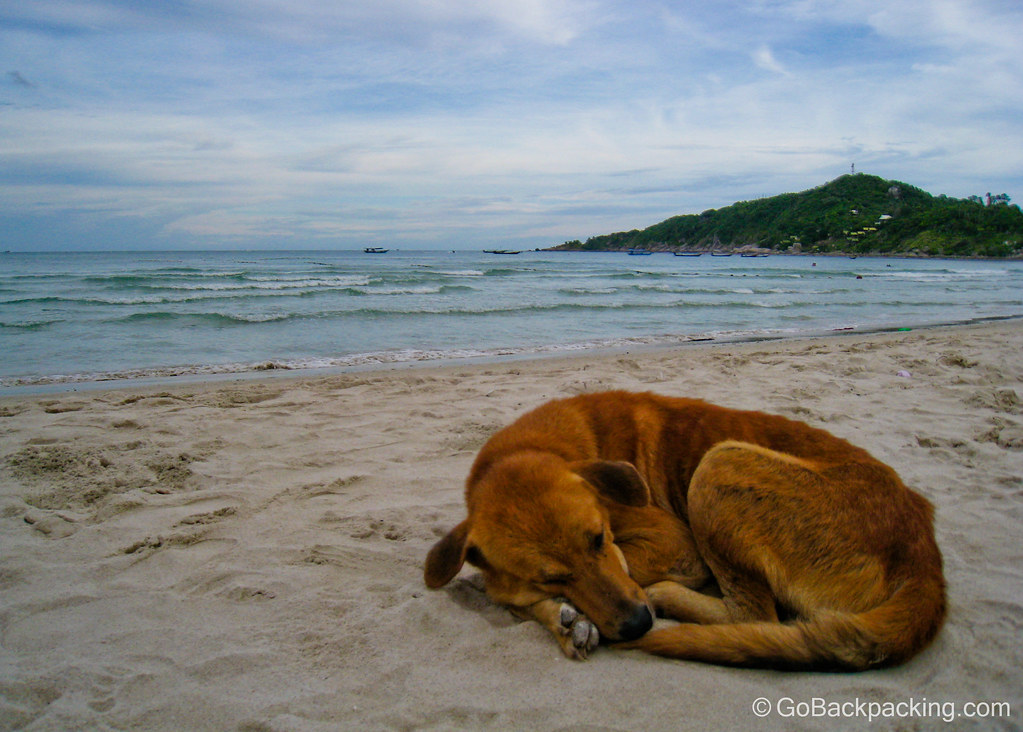 A dog curls up and relaxes after a busy day of playing with the backpackers on Haad Rin, Thailand's famous full moon party beach on the island of Koh Phangan. 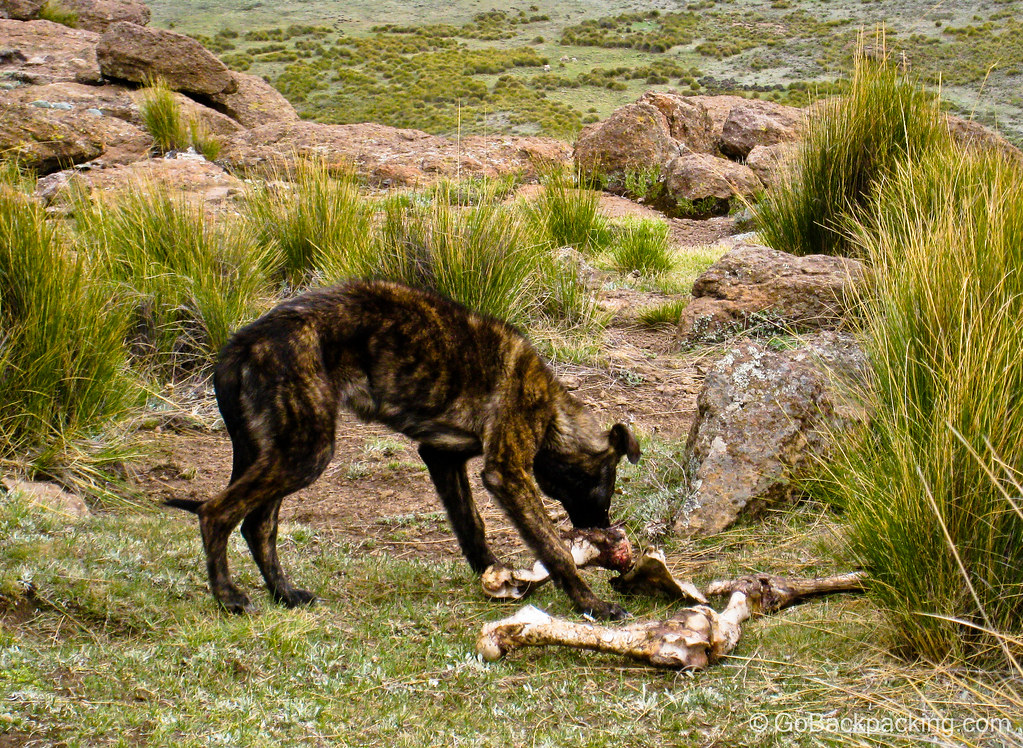 Ok, this dog looks more ferocious than cute, while knawing on some animal bones, but I couldn't leave him out. I saw him during a day trip into the mountainous, high-altitude kingdom of Lesotho (in southern Africa).

So you didn't try and eat these dogs like in this post https://gobackpacking.com/2008/09/21/dare-14-completed-its-a-dog-eat-dog-world/? I wish all these animal lovers knew just how sick you are.

Great post and loved the 1st photo of the dogs in Egypt... wish i had gotten that picture! Great composition and color as well. Your loving going back and seeing old photos in new ways... we love it to!

Ahhh!! This is so great - my husband and I , as wildlife biologists who travel, have been taking pictures of pups all over the globe as well- but your collection is inpiring! Would make a great coffee table book don't you think? We found that Cusco had the best (if you can really classify it as "best") pups and scenery for backround shots. It's unfortunate how dogs are treated in many of these places...although priorities are often much different when it comes to feeding your family or the dog in a 3rd world country. Maybe we could fit a few in our backpacks on the plane ride home?

Hey guys, glad you liked the post! I hope to travel through Peru in 2011, so thanks for the heads-up on Cusco. I know what you mean about how the dogs are treated. The worst thing I saw was on a beach in Costa Rica -- a dog was bothering a local, so the local wacked it over the head with the blunt end of his machete. Later, I saw the big gash on the dog's head when he was hanging out around my bungalow. I felt bad, but later heard from someone there that the dog recovered OK.

Dave, these pictures are really fantastic. Really nicely done. I love the picture where the dog is on the beach looking out.

Thanks Michael - it was fun to put together!