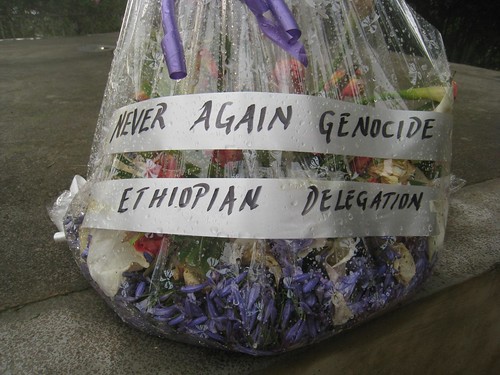 On the evening of April 6, 1994, President Juvenal Habyarimana's plane was shot down on approach to Kigali's airport.  Wreckage and bodies from the craft rained down on the presidential compound.  That evening, extremist Hutus began to implement their “final solution” to rid Rwanda of its Tutsi population.  First, they murdered the moderate Hutus of the government, to ensure they could usurp power without political debate.  Lists of Tutsis nationwide had been prepared well in advance, and on April 7, 1994, the brutal massacres began in full force.

Even sadder than the fact that this situation was about to unfold, was the fact that a trustworthy informant tipped off the head of the United Nations peacekeeping mission already on the ground in Rwanda with details about what was to come.

Lieutenant General Romeo Dallaire (of Canada) wrote about his subsequent attempts to inform the powers that be at the UN headquarters in New York City, however they brushed the warnings aside, and reminded him to stick with his existing mandate.  His hands were tied, despite his assessment that 5,000 troops would've been sufficient to prevent the genocide from occurring.

Reading Shaking Hands With the Devil, Dallaire's detailed account of living through this frustrating period of political ineptitude and unspeakable violence, before my trip to Rwanda, gave me a solid historical context for the 1994 genocide.  It also filled my mind with the horrific scenes that he and his troops encountered on a daily basis during the 3 months it took for the Rwandese Patriotic Front (RPF), lead by now President Paul Kagame, to liberate the country.

I'd like to say that upon my first glance outside the doors of the Kigali airport terminal, I'd forgotten everything I'd read about the genocide, but that would be disingenuous.  On the other hand, while I did continue to reflect on what happened throughout the city, and the country, 16 years earlier, it was quickly overshadowed by my present moment experiences.  And the present moment included rolling green hills set amidst beautiful blue skies, friendly people, and waving children. 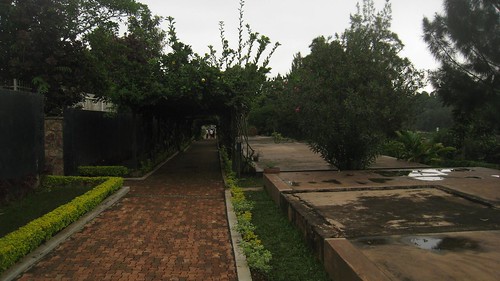 Mass graves on the grounds of the Kigali Memorial Centre

The Kigali Genocide Memorial Centre opened in 2004, on the 10-year anniversary of the genocide.  The main level of the centre is dedicated to the Rwandan genocide, which resulted in the immediate deaths of 800,000 people, and over the following months of many hundreds of thousands more.  It provides a timeline of events in Kinyarwanda, French, and English, along with a few graphic images, however I found Dallaire's book to be far more comprehensive.  The second floor of the Centre features short recaps of other genocides of the 20th century.

At the time I visited, the second floor also featured a photo exhibit of Rwandan kids who were murdered.  Under each large portrait was a short description of the child, including what they liked, and the manner in which they were killed.  I felt more emotionally affected by this exhibit then the whole downstairs level.  To read about once vibrant, innocent children being “hacked by machete” or being blown up by a grenade while hiding in their home's shower, is deeply saddening.

On April 7, 2010, I attended The 16th Commemoration of the 1994 Tutsi Genocide at the AED Globe Theater in Washington, DC.  Among the speakers were James Kimonyo, the Rwandan Ambassador to the United States, and Miss Valentina Iribagiza, a genocide survivor who was the subject of a PBS Frontline documentary in 1997 (“The Rwandan Girl Who Refused To Die“).

Before Valentina spoke, we watched an opening clip from the documentary, which showed her at the age of 13, several weeks after having survived a church massacre.  Hearing her softly speak, first hand, about the nightmarish events she witnessed was an experience I'll never forget.

Where can i find your rss? I cant find it

Completely understand what your stance in this matter. Although I would disagree on some of the finer details, I think you did an awesome job explaining it. Sure beats having to research it on my own. Thanks

Dave, a very interesting read a I respect you for learning more about the country's history before even arriving. Thanks for sharing.

Dave, a very interesting read a I respect you for learning more about the country's history before even arriving. Thanks for sharing.

Thanks Jason. One benefit of only taking a few trips per year is you can dedicate more time to learning about those places you do visit.

I have read Shaking Hands with the Devil, and it has certainly opened my eyes to the grim reality of what has transpired.