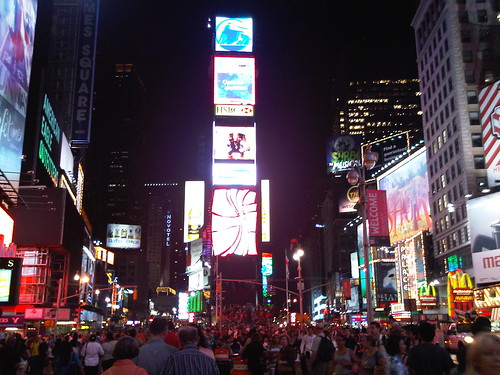 Time Square (not bad for a BlackBerry photo!)

After leaving the barbecue, I turned my attention to salsa dancing.

I'd made it out for a few dances the prior night at LQ, but having arrived after the band had finished also meant most of the people had left as well.

Still, I got a chance to check out the bar and dance space on the lower level with a few dances.

Club Cache, like LQ, was the recommendation of my German friend in Medellin.

It'd been a few years since she had last visited New York City, but my web searches turned up all the places she'd been dancing.

Based on their website, Club Cache only seemed to be open on Thursday nights.

It was located a half block from Time Square, which I inevitably pass through whenever I'm in the city.

It was filled with people coming out of the various theaters, and simply gawking at all the advertisements, which only seem to grow brighter and brighter with each of my visits. 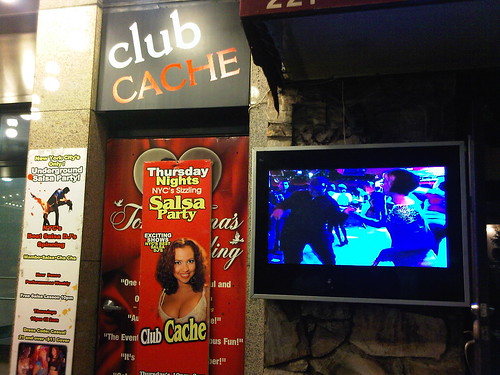 I arrived at the club before the door opened, so I stood around on the sidewalk with the other early arrivals.

I had a brief conversation with one Latino regular who asked if I danced On2, to which I replied a confident “no.”

I was hoping a free salsa class inside the club would help get me on the right track…err beat.

Once the club opened, I descended a staircase and paid the $11 cover.

The interior was nicely designed, though it was indeed a much smaller club than LQ, and below street level.

I wondered what the criteria was for a club or bar to be billed as “underground.”

In Medellin, El Eslabon Prendido, a popular downtown salsa bar, was considered “underground” despite the fact that it was at street level and common knowledge amongst foreigners.

The salsa-addicted began dancing immediately. I was in observation mode.

After about 30 minutes, a call was made for the dance class which was held in a small space near the bar. It was me, a super beginner girl, another guy, and a young couple.

This was my first clue as to how the night would turn out – barely a beginner or person feeling it necessary to take a class. 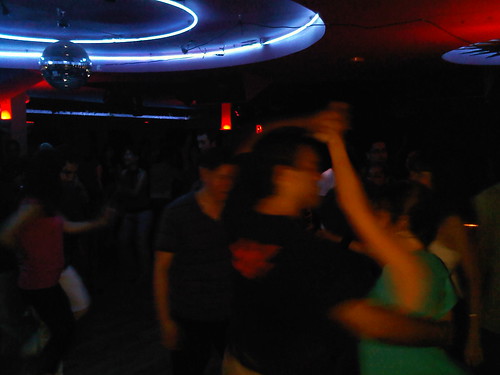 We went through the basics, and I was confused with moving on the second beat but managed to get the hang of it, even if just for the class. And then I never saw the beginner girl again.

Suddenly it was me and a packed club filled with regulars, and advanced ones oozing their own personal styles at that.

I watched a little longer and finally got up the nerve to ask a woman to dance.

It was awkward as I never connected with her dance style, but we managed and I appreciated her willingness to take a chance on me. I returned to observer mode.

I eventually asked another woman to dance. She was visiting from Seattle, where she said there was no salsa scene.

It made me feel lucky to be near Washington, DC which has a lively and friendly scene – one I'd already dove headfirst into upon arrival home from Colombia. And to my surprise, she said I was dancing On2!

But after that, I just felt like the general skill level was beyond me. Sure, I could ask more women to dance, but I wasn't having fun.

The website had listed the names of performers for each week, so I expected a band.

It turns out those performances are by dancers, not musicians. The manager came out under lights at one end of the dance floor, and suddenly everyone rushed to grab a front-row seat.

I was slow to react, not knowing what was going on, and had to stand on my toes to see the young openers – Tropical Heat.

The main act was Elvis and Teresa, and despite just giving us all one dance, it was a good one, and enough to get the crowd hyped. I left soon after the performances.

I decided an appearance at the upcoming 2009 New York Salsa Congress was not for me. Not yet at least.

I don't know what the woman from Seattle was smoking. There's a great Salsa scene here!

and despite just giving us all one dance, it was a good one, and enough to get the crowd hyped. I left soon after the performances.