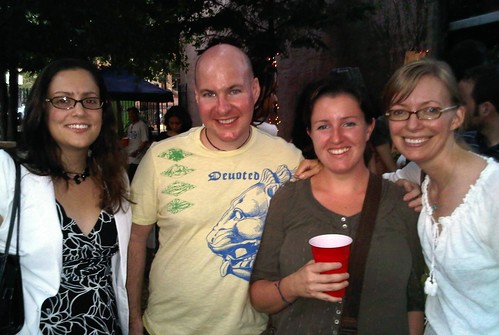 From right: Michaela, Kirsty, me and Melissa

Brave New Traveler was one of the first travel blogs I began to follow back in early 2007, and I still recall how it was something of a “must-read” for those of us figuring out how to write for a travel blog when we're not actually traveling.

And I still remember when the editor, Ian, announced a deal with Matador Travel whereby BNT would become part of this network.

I was aware of a few of the big online travel communities like BootsnAll, and blogs like World Hum, so I just assumed Matador Travel was a well-established entity.

But as I came to learn from the founder, Ross, they weren't some big corporate giant but an independent travel community founded just three years ago (on my birthday, no less).

Meanwhile, I learned about Sosauce, an even newer online travel community, by way of a review I wrote last October.

And while I liked the idea of becoming involved in an online community or two, now that I had so many stories to share, I knew it wouldn't be feasible until I returned home.

Alisha at Sosauce kept in loose touch with me, despite my rampant wanderings, and that is how I ended up at a networking BBQ in Brooklyn's Greene Garden.

Since I had little time to see my brother during my stay, he had invited me along to lunch with his friend, and I repaid the favor by inviting him to the BBQ.

That, and he knows his way around the city better than me!

After exiting the subway, we picked up a 6-pack of Sam Adams (always a good choice) and walked the few blocks to The Greene Garden, which was a cute little area fenced off and set back from the street – perfect for community gatherings and parties. 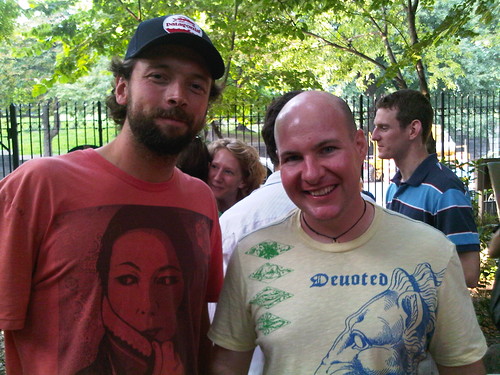 Ross, co-founder of Matador Travel, and me

I met Alisha at the door and wasn't inside more than a few minutes before I spotted Kirsty, my favorite Nerdy Nomad.

By now, you should know I love meeting fellow bloggers in person, specifically when I've actually been reading their blogs for a long period of time (as is the case with Kirsty).

As we started to talk, Michaela appeared.  She recently launched Briefcase to Backpack with Sherry Ott (currently teaching in Vietnam) which is all about encouraging people to take career breaks (or mini-retirements as Tim Ferriss refers to them).

Of the three of us, Michaela is the only one to live in NYC.

Kirsty is headed back toward Canada, before returning to NYC, and then heading in the general direction of South Africa for the 2010 World Cup.

Of course, we got to know each other in the context of travel, blogging, and a few beers in an ambient Brooklyn garden.

Melissa and another woman I met were both getting ready to pursue their own online travel business plans.

They both gave a high-level description of their ideas and made mention of putting teams together.  It sounded like they knew what they're doing.

By comparison, I seem to prefer a more organic, figure it out as you go and keep it casual, approach.

A DJ was spinning, and a cook was manning the BBQ, turning out delicious American hot dogs and hamburgers.

I've had the pleasure of BBQ's in New Zealand, Australia, and Colombia, but I'm still fondest of American barbecues.

I took the opportunity to introduce myself to Ross, founder of Matador Travel.  He'd recently taken a trip to Colombia, which was cool to hear.

I also met Sean from Sosauce.

We didn't get a lot of time to chat, so I suggested stopping by their office the next day, and he countered with a lunch invite, so we made plans to meet up.

As the sun went down, so did visibility.

Ross announced that since the BBQ was a success, they'd have more in the future.

If I were Australian, that'd earn a hearty “sweet as.”

Around 9 pm, raffle prizes were given away, and I made my exit.

I had a trustworthy lead to follow on a salsa club in Time Square.