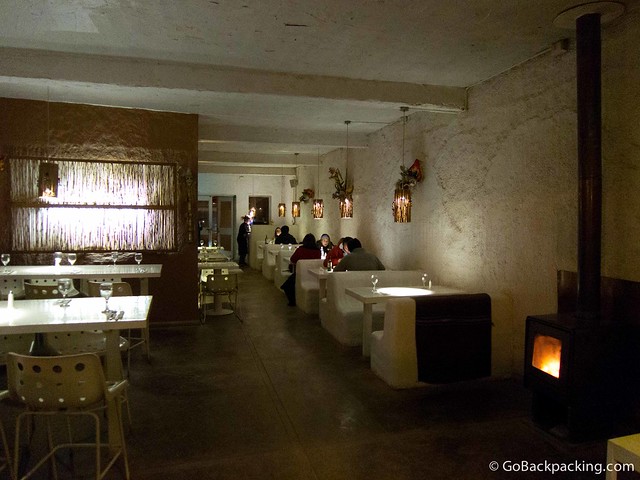 [I]t was dark when I arrived in San Pedro de Atacama, a small pueblo in the middle of northern Chile's Atacama Desert.

My series of flights from Santiago were uneventful, aside from the fact that it looked like we were landing on the surface of Mars.

The minivan dropped me off in the middle of the dimly lit town.

It was colder than I'd expected, and after gaining my bearings, I checked into Hostal Rural, which I chose for its central location, and $20 dorm beds, a bargain by San Pedro standards.

The reception desk was located in an open courtyard, under the night's sky. A ping-pong table featured prominently, and there were a few hammocks slung around the space.

I checked in, dropped my bags in a cramped 6-bed dorm, and stepped out for dinner. 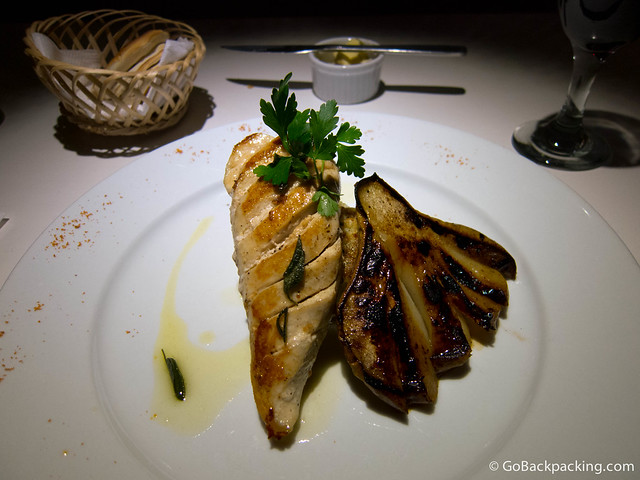 Chicken with a sage butter sauce, and roasted potatoes

I didn't have to go far. On a nearby corner, I found Blanco Restaurant advertising a set dinner menu for 7,000 Chilean pesos ($14).

Entering the restaurant, I found a rustic, Earthen atmosphere. True to its name, everything from the walls to the tables and chairs were white.

A wood burning stove was alight near the entrance, drawing me in further with its warm orange glow.

I took a booth, and unsure about the quality of salmon now that I was in the desert, opted for the chicken with sage butter sauce, and roasted potatoes.

I was more confident about the Chilean wine, ordering a glass of red to accompany my entree.

The presentation was on par with my expectations for a Santiago-based restaurant. It was a welcome surprise to see such attention to detail in the middle of nowhere. 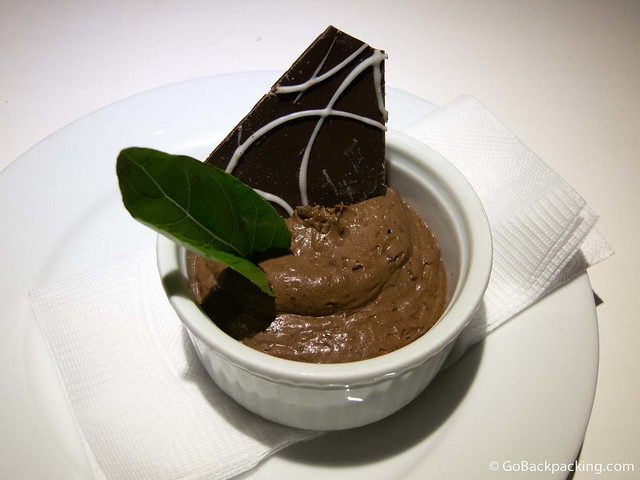 Mousse can be a real hit or miss dessert in Latin America, but they got it right at Blanco, to my taste buds' delight.

Oh, and there was Wi-Fi. At this restaurant. In the middle of the desert.

I hadn't been in San Pedro long, but I was quickly discovering this little town offered more in terms of comfort and convenience than I'd expected. 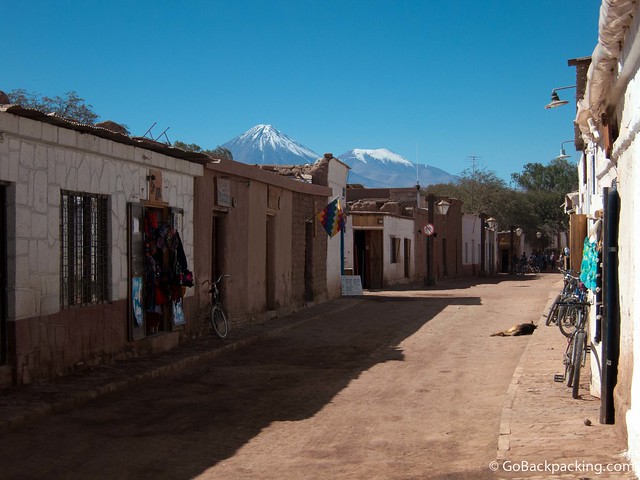 The next morning, I awoke to bright blue skies. Not a cloud in sight.

In the light of day, I could see snow-capped volcanoes in the distance, lending more credence to the idea that I had, in fact, landed on another planet the day before.

The main tourist street in San Pedro is nothing more than a dusty dirt road, lined with restaurants, souvenir shops, and tour agencies. 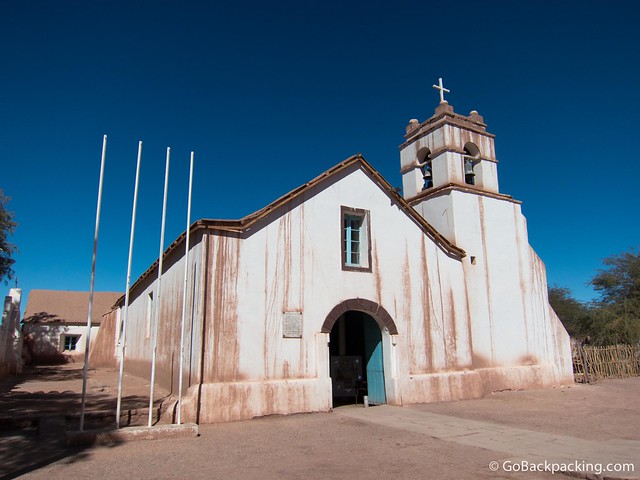 There's not a whole lot to see in San Pedro itself, aside from the 19th century church built on the same location where the original, 16th century one was once erected.

But you don't go to San Pedro de Atacama for the “San Pedro” part, it's the “de Atacama” (of Atacama) that inspires tourism to the region.

San Pedro is base camp for exploring the high-altitude, desert landscapes around you.

The remoteness of San Pedro de Atacama also means little to no light pollution, making it one of the best places in the world to practice astronomy.

It should then come as no surprise, the first tour I signed up for was a tour of the night's sky with SPACE (San Pedro de Atacama Celestial Explorations, $35).

If there's one tour you shouldn't hesitate to take, it's the astronomy one, both because it'll be awesome, and they don't run in the days immediately before/after the full moon each month.

It's also weather dependent, so don't put it off if your time is limited. 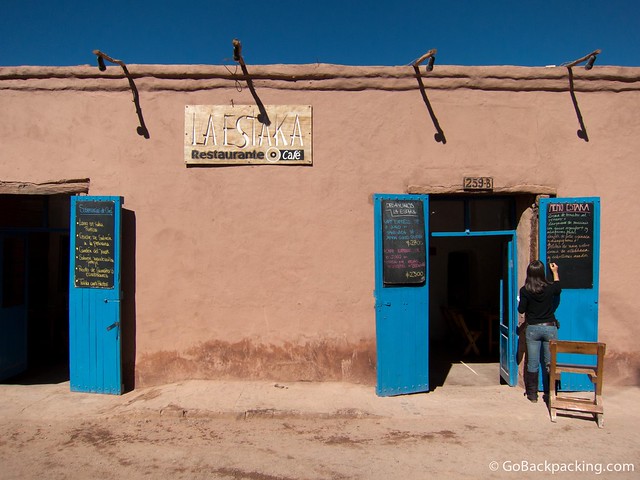 Dressed in as many layers of clothes as I could manage, I wandered over to the meeting point near the SPACE shop later that night.

Along with a dozen others, we were driven to Solor, south of town. It's here that Alain, an astronomer, and his wife Alejandra, built their home and telescopes.

Today, they operate the largest public observatory in Chile, and also use their facilities to conduct private research on Near Earth Asteroids and Comets. 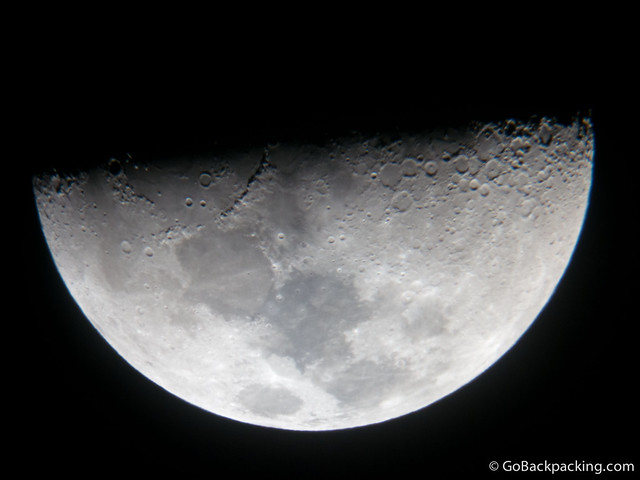 The moon through a telescope, taken during my astronomy tour

But the first part of the two and a half hour tour is learning about the night's sky with the naked eye.

And the sky above the Atacama Desert is one of the most spectacular I've ever seen.

Our guide, an astronomer, pointed out the Milky Way, which was visible as a swath of bright stars across the sky. It was the first time I'd seen our galaxy with my own eyes.

He also pointed out numerous constellations, several of which I'd never seen before, including Orion.

He used a green laser pointer which seemed to stretch millions of light years into the distance.

As fascinating as it was to be there, it was also hard to ignore the bitter cold. Everyone was feeling it, but we endured without complaint because you don't often see stars and planets so brightly in your life.

The second half of the tour included the use of a dozen or so telescopes of varying sizes and magnifications.

Through one, he helped us take pictures of the Moon's cratered surface. Through another, we saw the rings of Saturn.

Wrapping up, we entered the house for a warm beverage, and question and answer time. Then, we made the drive back to San Pedro.

I was excited for my next activity, sandboarding in Death Valley.

Peter Korchnak @ Where Is Your Toothbrush?

Hello Dave, my name is Ariel, and I am the webmaster of http://www.SanpedrOnline.cl where I installed a Travel Blog section where I want to publish yours. I also run the Oficial FanPage of San Pedro de Atacama : https://facebook.com/SanPedroDeAtacamaChile

I am contacting you to make a link exchange from this article to my site and from my Travel Blog section AND FanPage to this article… are you interested?

I no longer do link exchanges.

its a nice place place looks absolutely gorgeous! Thanks