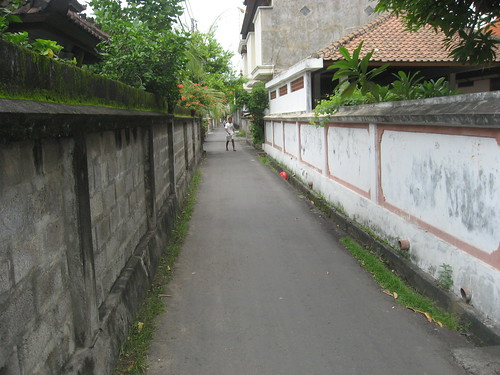 The Lonely Planet warns readers against prostitutes that ride around on scooters and hassle men walking around alone at night. It specifically warned of one gang (alley), so I made it a point to stay clear of it. At the same time, I had little sense of how this “danger and annoyance” might present itself. Unfortunately, I learned the hard way.

I had found what I thought to be the fastest internet cafe in Kuta, so after being frustrated with slow speeds elsewhere, I decided to spend several hours at it before I left Bali for Lombok the next morning. My accommodation was about a 7-10 minute walk through a few winding gangs. I'd done it several times during the day, and knew where I was going, and how long it'd take.

I left the internet cafe around midnight, and the gang it was on had restaurants so it was still a bit lively. I made my first turn onto the second gang and noticed the shops that had been open earlier were closed, the street was rather empty, and not well lit. I puffed my chest out, and continued to walk at a quick pace trying to look imposing.

A woman on a scooter came up from behind me, and parked it about 15 feet in front of me, in a dark shadowy area. She got off the scooter, and as I walked past her, she grabbed me below the belt, which of course startled the hell out of me. At the same time, she was soliciting me, and I was saying “no, no, no” as I kept walking. She went back to her bike, drove past me again saying “bye, bye” and then stopped another 15 feet ahead of me. 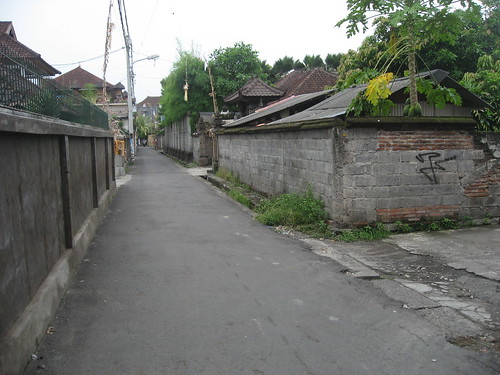 This time, she motioned to a pitch-black alley, and as I walked by, she grabbed my right arm tightly, and went below the belt again. I firmly told her to “get off me” and pushed her away. She got on her bike again, rode past me saying “bye, bye” and this time she kept going.

It wasn't until 2-3 minutes later when I was getting they key to my room out that I realized the 70,000 rupiah (about $8) in my back pocket was gone. My money belt finally showed it's worth, as it contained much more cash, credit cards, and my passport. I was thankful she didn't try to take my backpack which had my camera and mp3 player, however I was angry at the woman for what she did, and myself for being too complacent. Looking back, as you can see from the photos, I had nowhere to go except forwards or backwards, and she surely knew that from past thefts of this nature.

I considered reporting the incident to the tourist police the next day, however after hearing corruption stories about them, and thinking it'd do little good since I couldn't see the woman's face (she was wearing a helmet, besides the fact that it was pitch black), I decided to carry on to Lombok the next morning.