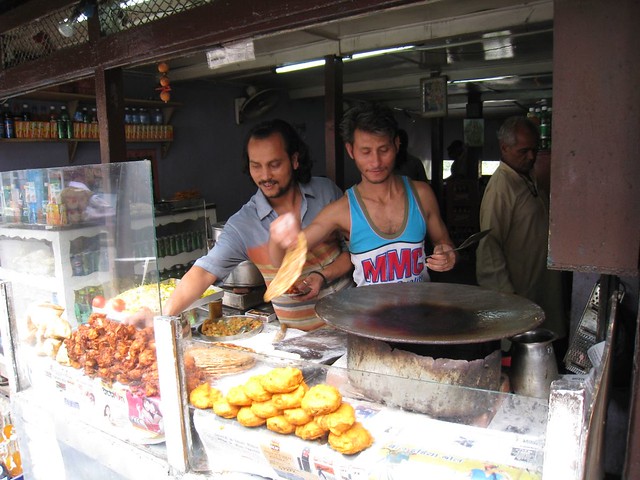 Whatever they cooked up for me, I'm sure it was good.

Troy has invited me a half dozen times to visit India since he decided to meet up with our friend Christine there next month. It was a tempting invitation given how much fun the three of us had in Medellin, but I replied that I wasn't ready.  I needed more time to lapse, as though two and a half years isn't enough to recover from the stresses of travel on that great subcontinent.

I almost didn't go the first time, in 2008.  I'd been talking to backpackers who made the trip from India, and most described Nepal as cleaner, the people friendlier.  My anxieties were getting the best of me.

As luck, or fate would have it, a Canadian woman appeared atop the Pokhara mountain where I was enjoying breakfast with a Himalayan view one morning.  Her advice was to “go with the flow,” as though the same four words have been passed on to India first-timers for generations. 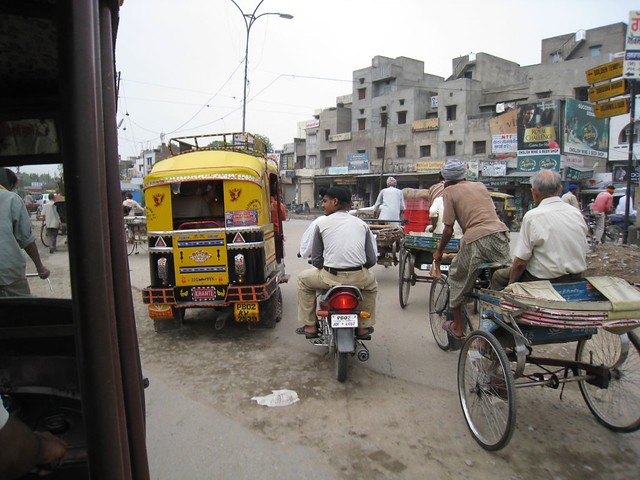 A typically crowded street in India includes several common forms of transport, such as the auto-rickshaw, bicycle rickshaw, and motorbikes.

I made up my mind in that instant to see the country for myself.  I spent 7 weeks crossing India from the northeast corners of Sikkim to the northwest border with Pakistan.  And I had many amazing, spiritual experiences, until the poverty, inefficiencies, heat, pollution, cows, public urination, dust, and touts utterly exhausted me.  When I flew from New Delhi to Thailand, I didn't see myself returning to India for years, or decades, if ever.

Then I read these words a few weeks ago:

It took me a long time and most of the world to learn what I know about love and fate and the choices we make, but the heart of it came to me in an instant, while I was chained to a wall and being tortured.  — Shantaram

And with that irresistible opening salvo, I was immediately sucked into the world of an Australian escaped convict in 1980's Bombay. Gregory David Roberts was that convict, and Shantaram is the novel he wrote after ultimately being recaptured by police in Germany.

The actual events of the author's life were so dramatic, I read the book as though the whole story, and all the characters, were true-to-life.  Of course they are not, however it's to the author's credit that he can take you along on such a wild ride, and get you feeling the emotional up's and down's of Lin, the protagonist.  And there are many. 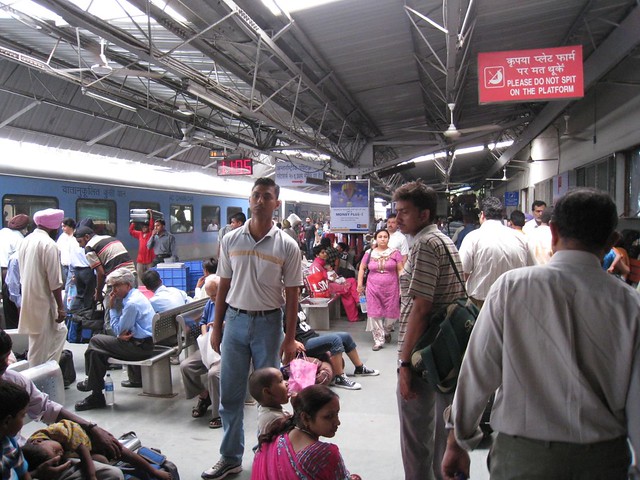 Immediately upon stepping off the bus in Bombay, Lin meets a tout named Prabakar, whose big smile he takes an immediately liking to, and thus the adventures begin.  In these first minutes in the city, he also encounters Karla, a Swiss woman who immediately captures his heart.

After Lin is robbed, Prabakar invites him to live in the village where he grew up.  There he picks up the local language, which comes in useful throughout the years.  Here, we experience the customs of rural life in a typical Indian village, and Prabakar's mother dubs Lin with the name Shantaram, meaning “man of peace.”

Upon his return to Bombay, Lin goes to live in Prabakar's slum, which is about the only standard of living he can afford at the time.  He starts to make money by helping tourists buy drugs — hashish mostly.

Interestingly, he begins treating the slum-dwellers for minor illnesses and injuries out of his tiny home, which becomes a makeshift clinic.  His descriptions of life in the slum were my favorite part of the book, as the author really did spend time living in a Bombay slum, operating a free clinic.  He continues to pursue Karla, at least in his mind, because living in a slum is hardly conducive to building romantic relations, at least with a Western woman. 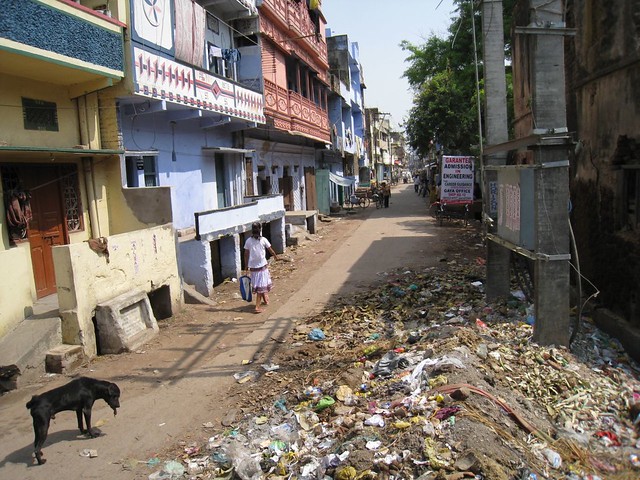 A young girl walks down a trash-strew street in Gaya.

The book takes a major turn when Lin gets picked up by the local cops, and thrown into prison.  As disturbing as the descriptions of the Indian prison were, this was also a part of the story I found riveting.  Eventually, he's bailed out by a mafia kingpin, at which point he goes to work as a counterfeiter, smuggler, and gunrunner to repay his debt.

The scenes of fighting and violence became more frequent, and every chapter seemed to feature grisly murders that were all too detailed in their descriptions.  Around the 600-page mark, I felt as though the book had already climaxed, which left a lot more reading to do before the unanswered questions in Lin's life were resolved.  Ultimately, I was satisfied with the way the novel ended, though a few people on Twitter commented that it was a mess.

At 936 pages, Shantaram is the second longest book I've ever read, and I devoured it in under two weeks.

Having been to India once already, it brought back my own memories as I related to the characterizations of Indian people, such as their famous head waggles.  The more I read, the more I appreciated the country I'd almost skipped over entirely.

I remembered my first chai, bought for me by Indians on my first (overnight) train ride.  My fondness for the Bollywood movies, and the amazement that women dressed in colorful saris could seem so graceful amidst trash-strewn streets. By the end of the book, I was ready to book a flight back to India.

My return will have to wait, however, as I've already invested in other plans for 2011.

I do know that it will be a lot sooner than I expected as a result of reading Shantaram. 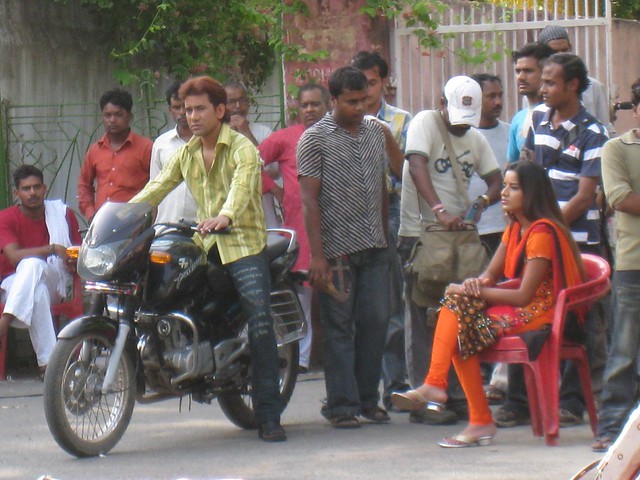 Actors in a Bollywood movie await their cue for a scene shot in Bodhgaya.

PS – You can learn more about out the author, David Gregory Roberts, on the book's website.  He is working on the sequel to Shantaram, and hopes to have it published by late 2011.  He then intends to write a prequel, followed by a fourth and final installment.

A truly fabulous book. Everyone should read it. He is the most eloquent writer I have ever had the pleasure of reading!!

I'm half way through reading this book and absolutely love it. It's inspired me to travel to India and made me realise how lucky I am to have my freedom and to travel legally!

Shantaram was my single most rewarding read of 2010!!

Shantaram. Seems like every backpacker is reading this book nowadays. Now I finally read a good summary about it.

Hey Armin, I thought the same thing when I saw people reading Shantaram in India and Thailand back in 2008. I think it's become a classic backpacker book.

Ok enough is enough, I need to read this book already!!! Your like the 100th person to recommend it.

I'm sure once you get into it, you'll be hooked.