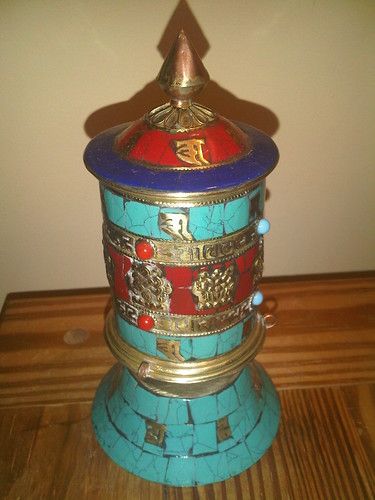 As I was waiting for Pommes Frites to open in New York's East Village, I happened across Himalayan Vision.  Knowing Tibetan shops are always warm and welcoming, I stepped inside to browse the same items I'd browsed so many times before in Nepal and eastern/northern India.

I asked the store owner where he was from, and he indicated Shimla in northern India.  I had stopped short of Shimla during my journey, though I relayed the areas I did have a chance to visit, including McLeod Ganj.  There was an instant connection, or so I felt.

I picked up a copy of a Buddhist chanting CD I'd heard almost every day from my time in Nepal.  The owner indicated it was very popular, but I had already bought it before leaving the country.  He started to play another CD for me instead.

One item I seriously wanted to buy the whole time I was in the Himalayan region, but didn't want to carry around, was a prayer wheel.  I'd spun them countless times – small ones, big ones, and the seriously massive ones (see video below).  And always in a clockwise rotation according to custom.

I'd asked all my questions about symbolism and materials in 2008 while traveling.  The bright blue stone is turquoise.  The red stone is coral.  And my favorite, the rich dark blue stone, is lapis lazuli.  The artists of the Italian Renaissance use to grind down lapis lazuli and paint with it.  I always found it to be a striking color.

The inscribed mantra (prayer) on Tibetan crafts is always the same, whether you're buying a necklace, prayer wheel, or t-shirt:

The common English translation is “Behold! The Jewel in the Lotus.”

I'd recited the mantra countless times since learning about and practicing the principles of Tibetan Buddhism in my mid-twenties.

Inside the prayer wheels are scrolls of paper with Om Mani Padme Hum written on them.  The bigger the prayer wheel, the more iterations of the mantra rest inside, and are therefore released with each rotation.  I imagine that for Tibetans, having a physical object such as a prayer wheel, made it easier to remember and recite their daily mantras and generate good karma.  I always thought that if I bought a prayer wheel, I too could do the same once I returned home to the routines of life in the States.

And so when I happened across Himalayan Vision, it felt like the time was right to buy my prayer wheel.  I can be a picky shopper, however the quality of the one that caught my attention was high, and the price was surprisingly low at around $40.  I asked the owner about the low rates, and he indicated that he had to reduce them as a result of the economic downturn.  He was also going to be closing down his second shop in Massachusetts.

Several weeks later, I'm happy to report that I spin my Tibetan prayer wheel at least once a day, releasing dozens, if not hundreds, of Om Mani Padme Hum's in the process.

hey there, this might be little offtopic, but i am hosting my site on hostgator and they will suspend my hosting in 4days, so i would like to ask you which hosting do you use or recommend?

I really liked your blog! It helped me alot...

Hey, something is wrong with your site in Opera, you should check into it.