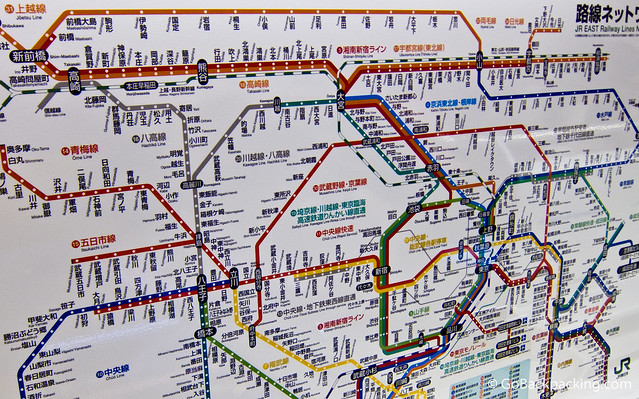 Map of JR Railway Lines in Tokyo, just one of dozens of companies operating there.

If you've ever been on a plane that needed to be de-iced, I'm sure you'll agree it's an unsettling process.

Once I seated myself on Continental's Boeing 777 bound for Japan, I looked out the window to see a centimeter thick sheet of ice caked across the left wing.

Ice is bad for planes. Per Wikipedia, it can “cause critical control surfaces to be rough and uneven disrupting smooth air flow and greatly degrading the ability of the wing to generate lift.”  This can result in a crash.

Thus the 30 to 45-minute de-icing ritual, whereby your plane is surrounded by special trucks, and people who spray a non-toxic, colored goop across the whole thing. This was my first experience with the process, and I couldn't shake the image of my flight ending up on the evening news.

Of course there was nothing I cold do but sit, and hope, and remind myself that if ice does cause the plane to crash, at least I died in the midst of doing something I love.  In those anxious moments, I was forced to surrender.

I let go of my life.

As the plane accelerated down the runway, I watched with fascination as the green de-icing solution rippled in waves across the broad expanse of the wing.  In the process, it wiped away any remaining ice particles.  By the time we lifted off, the wing was as smooth and clean as if it were a dry Summer's day.

I relaxed.  I reclaimed my excitement for the adventures that lay ahead of me in Japan, after what would be the longest non-stop flight of my life (14 hours).  My mind was flush with all the things I still wanted to do and experience.

Buddhists believe life as we know it is a neverending cycle of birth, death, and rebirth (unless you reach enlightenment). We go through this experience, whether conscious of it or not, in every day moments and extraordinary ones.

The practice of surrendering to the present moment is part of why I enjoy traveling, and it was a recurring theme during my time in Japan.

Take one look at a Tokyo metro map and you're forced to surrender.  The system is a complex network of city subways and trains, run by dozens of different companies.  Yet once I accepted that I'd get lost or I'd go out the wrong exit, and that was OK, I slowly got the hang of how to navigate the city's subterranean maze. 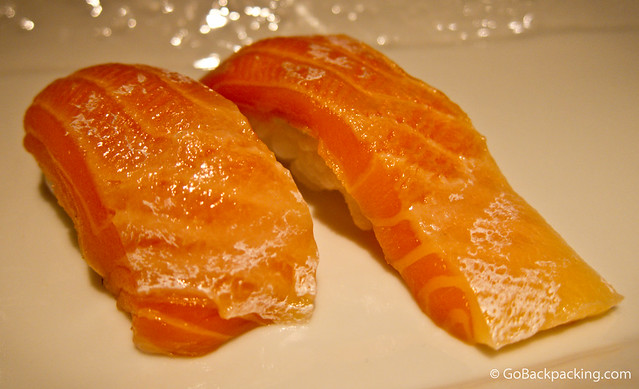 During my first night in Kyoto, I was referred to an inexpensive sushi restaurant, but couldn't find it even though I had a map. Instead, I walked into a random one, sat down, and was soon watching the chef prepare the the best sushi of my life. A perfect example of surrender and serendipity in Japan.

I'd heard a guy in my Kyoto dorm room talk with his girlfriend over Skype about the Geisha he saw that afternoon. I spent 5 days in Kyoto, not seeking one out, but secretly hoping to see one all the same.  I'd given up on the idea, as I made my way to catch a train back to Tokyo.

It was only after I walked up the stairs of my train's platform, minutes before departing the city, that I saw a Geisha sitting in a waiting area.  She was wearing as much white make-up as the guys from Kiss, her hair in perfect form. Posture statuesque.  I took a seat in the same room, stealing glimpses of her before she got up to leave a few minutes later.

Learning to surrender isn't as easy as it sounds.  All too often, the ego gets in our way. Constant awareness is required, the kind you can count on when traveling abroad.

Can you recall a time when something wonderful happened, only after you surrendered?

I'm terrified of flying, though I love traveling. Not really a good mix. I always end up googling about flight safety before flying, yet never feel completely comforted by the statistics I read. Tonight, I'm preparing to fly back from Boston to LA and realized that, what I need more than anything is to be 'ok' with dying in a plane crash.

Let me tell you, there are not a lot of 'it's ok to die in a plane crash' posts/sites on the internet. Oddly. Most everything is about 'how to survive a plane crash', which I find is more hurtful in the end, because there is no real way to control that.

Your mention here about surrendering your life to fly is exactly what I was looking for. Thank you. I know flying fear wasn't your main focus of your post, it's just really a relief to know that someone else out there has felt that way. It feels less lonely.

I'm glad you found some comfort in my post. I was reading "The Power of Now" by Ekhart Tolle at the time.

Thanks for reading Jackie - hope you're doing well. :)

Thanks for reading Jackie - hope you're doing well. :)

Hi Dave, I felt this in Moscow, when I was surrounded by people speaking another language, dressed differently, crowded and moscow metro map in front of me. The trick, as you said, was to let go. PS: I can' believe I actually read this entire post :P

So Moscow has a big metro system too? For some reason, I never thought of the city as having one.

I had the same experience when I traveled to Japan in high school! I was there for a month, and looked every day for one. Riding the bus, I had to have a window seat. Then, on the night before I flew home, I saw one walking by my hotel. Definitely an amazing, beautiful sight.

What a great post! You had my attention until the end. Glad you survived the flight and saw your Geisha :)

Thanks Andi, I was surprised dinner with the Geishas in training (not even the full fledged ones) runs around $100 in Kyoto. Not a budget friendly experience, which is why the backpackers get so excited about seeing them going about their daily business.