If I've said it once, I've said it one thousand times, I love my fiance more than words can express. He puts up with me in the best of times and in the worst of times. One could say I was born with less than the average person's patience, mix that with a strong type-A personality, and you have a downright annoying person to ride in a car with.

That's right, Ireland. Land of small cars and even smaller roads. So, how did we survive the terrifying roads of the Emerald Isle? An even better question would be how did I not get ejected from the car after being a growly troll in the passenger seat day after day?

The answer is simple; GPS, Guinness, and potty breaks.

These three simple things made the two of us sane enough to endure a massive trek across Ireland. Endure is perhaps not the best choice of words, we LOVED Ireland. It was beautiful, greener than I had ever expected, and full of some of the nicest people we came across while in Europe. The roads on the other hand, were enough to throw myself and Andy into an unexplainable fit of rage and terror. Ok, let's be honest. I had more fits then Andy ever did. 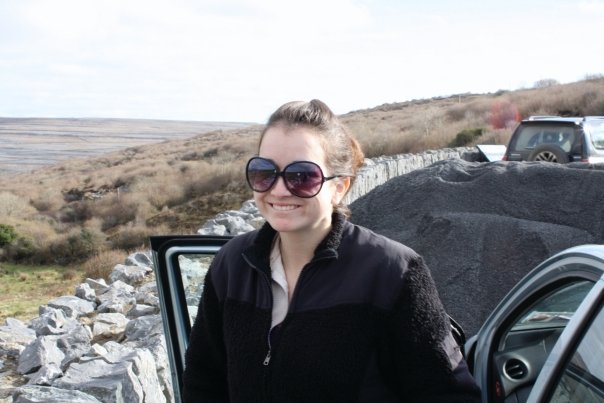 Andy did the majority of the driving while we were on our Irish adventure. We had the pleasure of riding across Ireland in a Toyota Yaris.  I referred to the little gem as the devil incarnate.

The Yaris resembled that of a pregnant roller skate and had it not been for our GPS, we probably would have driven that thing right off of a cliff. If you are planning on driving through Ireland I HIGHLY recommend a GPS. It definitely saved our relationship, and our butts from getting lost multiple times.

Granted, the GPS would get a mind of its own on occasion, and send us driving down some very interesting road combinations. Sometimes we would both end up screaming in fear that we got the car stuck, or we would come across a pub that we would decide to stop at.

The pubs bring me to my second point, Guinness. Had it not been for our multiple stops at pubs to have a beer I don't think I would have been calm enough to stay in the car. No, I am not encouraging everyone to go drink!!

A half hour stop and a beer is something that helped calm me down while cruising around in our little death trap. The stop is what I truly needed, and the beer actually had the added benefit of keeping me from crawling up the windows for a good twenty minutes after we started driving again.

Ok, so potty breaks were actually just a huge scam for me to get out of the car when I was terrified. I never truly had to go, but we almost always stopped at a pub which led to more socializing with the locals, something I truly enjoyed doing. We met many interesting individuals, and at least we dressed appropriately. Most of the people thought we were from Ireland, and did not see us as tourists, which helped us blend in.

After we had made it through Ireland unscathed, we showed up at the car rental parking lot for them to inspect the Yaris. In the United States, most rental companies will go over the car with a fine toothed comb.

Well, it is hard to inspect a car when on the sheet there are multiple circles to show dents. Andy noticed the sheet the inspector was looking at, and it had at least 20 circles all over the car to show dents and scratches. If anything had been damaged due to scraping against shrubs or anything, there was no way to tell what was new or what was old. Even though you cannot tell, it is well worth the money to purchase full coverage on your car in Ireland.

Somehow. with all the dents, bumps in the road, and crazy driving, the Yaris stayed intact long enough for us to make it safely through the country of Ireland.

Below is a quick video of one of close calls in Ireland. Enjoy.

If anyone has experienced any of this please share your stories below for everyone else.

Shelly is a costumer on movies and Andy dwells in cubes.
Traveling is a way for us to be by ourselves and a way to escape work. The best thing about travel is the excitement it creates and the joy of not knowing what will be around the next corner. We like trying new things all the time and do not want to have a “normal” life.
We hope you enjoy

I would love to drive around Ireland, I have family there and although I have visited the cities would love to go the rural areas too.

The roads in Ireland are very beautiful, but also quite terrifying. One of the worst things is when you can't see around a turn in the road because of the hedges on either side of you! The roads can also be very narrow- once we were driving to visit family down a tiny dirt road, and a truck started driving towards us. There was no room to pull over or pass, so we had to drive in reverse for a few miles! Regardless, Ireland is still my favorite place.

The roads in Ireland are very beautiful, but also quite terrifying. One of the worst things is when you can't see around a turn in the road because of the hedges on either side of you! The roads can also be very narrow- once we were driving to visit family down a tiny dirt road, and a truck started driving towards us. There was no room to pull over or pass, so we had to drive in reverse for a few miles! Regardless, Ireland is still my favorite place.

I think what got me is that the roads ARE so tiny and unkempt that there is now way you should be able to go that fast - I pulled over frequently so that ppl could pass me in my little Micra ;-) lol.