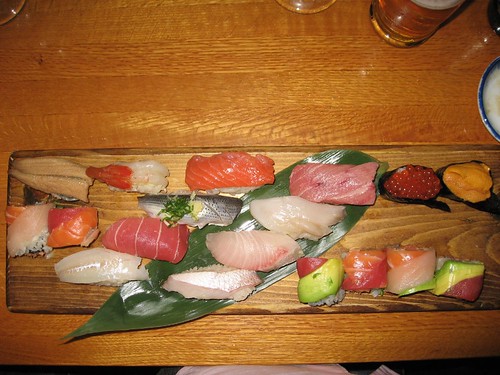 If I'm going to work my way up to eating tarantula's and snake hearts in Asia, then high-end sushi is a good place to start my training in the bizarre foods arena. Yes, sushi and sashimi are still new territory for me and my palette. Inspired to expand my horizons, I was excited to meet up with some friends last weekend for a delicious meal at Sushi Taro in the Dupont Circle area of Washington, DC. 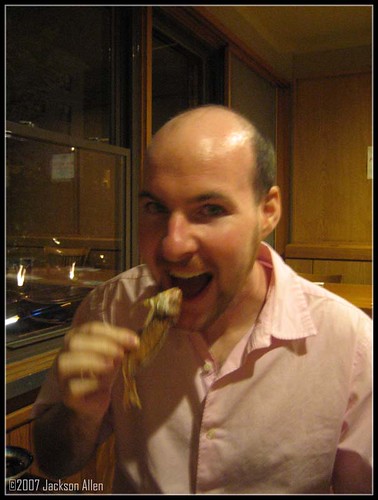 To really throw caution to the wind, I joined two friends in ordering the $42 Chef's Omakase (selection). We had no idea what was coming! My friends ordered the sashimi version (without rice), while I still felt the need to have my seafood grounded in grains.

Pictured above was my 18-piece entree, which included: sea eel (upper left), shrimp, fatty and medium tuna, sea urchin (upper right), salmon, salmon roe, mackerel, assorted rolls, and a few more fish I can't recall. On my first bite, I was reminded of the nasal-clearing wasabi that is often used as glue between the fish and rice. All in all, I enjoyed most of the fish. The sea urchin's texture was very soft, and dare I say silky. I couldn't bring myself to put the whole thing in my mouth at once though (baby steps). The sea eel was cooked a bit, and not my cup of tea. I was surprised when I found the salmon eggs would individually pop like balloons in my mouth, releasing a salty liquid like a little gift.

My friends' sashimi entrees held the real action – shrimp heads, and a full, fried, palm-sized fish skeleton. One of my friends easily chomped down on the whole fish, while the other couldn't bear to take a bite. As we were wrapping up, I felt it my duty to push my limits, so I took the uneaten fish skeleton and bit the head off of it. Mostly crunchy, it didn't really taste bad, or good. I felt a little bit of squishiness – perhaps the brain or eyeballs, however I found it quite edible!

I may eat these words later, however for now, I'm ready to eat some gnarly cuisine abroad!

Large photo of my sushi