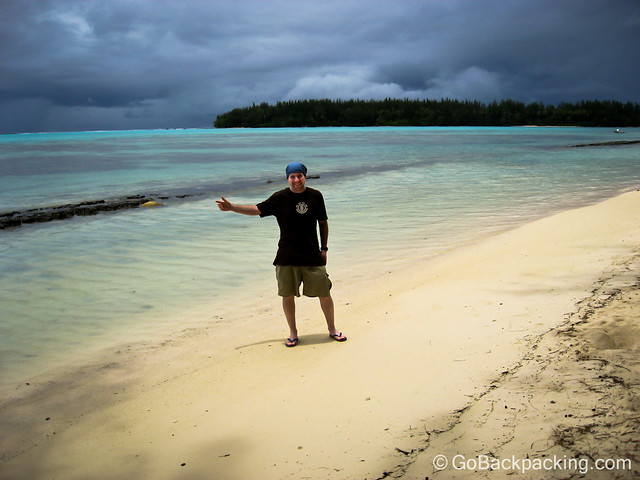 Hanging out on Moorea, a small island west of Tahiti.

My Mom took more than a few solo trips in her twenties, before meeting my Dad. One such trip was to Australia, by way of Fiji. A black wooden spear, and a picture of a traditionally dressed Fijian man, were two of her souvenirs that adorned our house when I was growing up.

When it came time to plan my own visit to New Zealand and Australia, as part of my trip around the world, I came very close to booking a direct flight over the entire South Pacific.

I naively assumed the cost of Fiji holidays, or touching down on any island nation, would be too high — they were the domain of the rich and famous, not budget travelers.

Luckily, I came to my senses, thinking how much of a waste it'd be to fly over the entire Pacific Ocean and not stop on at least one remote island paradise.

Upon doing further research, I discovered there were two popular destinations for backpackers on 'round the world trips: Tahiti (French Polynesia) and Fiji. 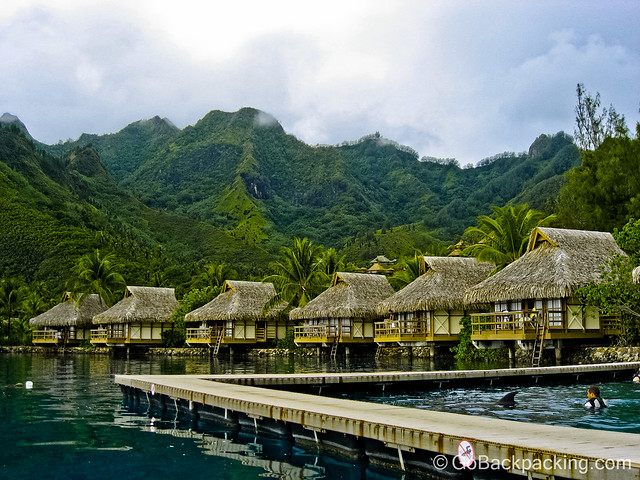 Tahiti. The name of French Polynesia's most populated island just sounded exotic. And when it comes to making travel decisions, sometimes that's all I need. But it also sounded expensive.

To find out if I could afford a brief stop in French Polynesia en route to New Zealand, I searched the BootsnAll message boards. A few travelers had taken the time to share their experiences, including the cost of staying at a campground called Chez Nelson on the island of Moorea, a one hour ferry ride west of Tahiti.

About $20 per night afforded a roof over your head in a small (and I mean closet-sized) room. But that was enough for me to consider the option further.

Next, I looked up flights, and found that it would actually be about $100 cheaper to fly to New Zealand on Air Tahiti Nui, including a stopover in French Polynesia, then if I were to fly straight to Auckland on Air New Zealand. After giving it a lot of consideration, I booked the Air Tahiti flight, with a 5-night stopover in the middle of the South Pacific.

During my stay, I couchsurfed with a French doctor, watched the sun set from a black sand beach, partied under the crystal clear stars, and snorkeled with sharks.

While I didn't go on any organized adventure tours, I did help my new doctor friend drive his Volkswagen down a steep and treacherous mountain, at night, in the rain. I was so anxious, I had images of plunging off the mountain into the abyss below. Thankfully, it was an automatic.

I averaged $66 per day, which ironically, was 33% less than I'd end up spending per day in New Zealand and Australia. In retrospect, travel in the South Pacific had the potential to be much cheaper than I ever imagined. And I wish I'd given myself more time there. 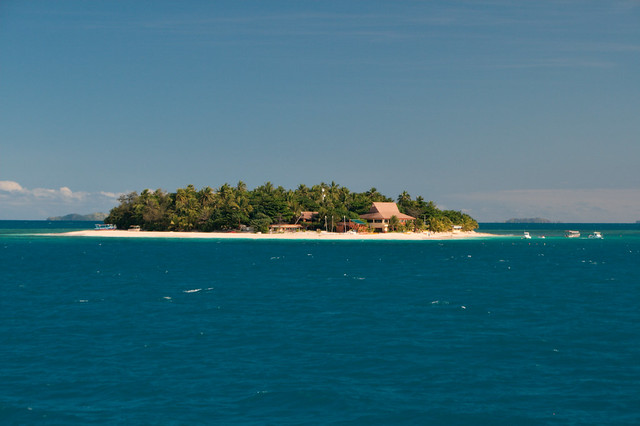 Fiji was far and away the more popular destination for backpackers when I was researching where to go. And I still believe that's the case today.

The cost of traveling there is less, and there are plenty of Fiji holiday packages available to suit anyone's needs. Both Fiji and Tahiti are popular diving destinations, and I know Nomadic Matt, for one, learned to dive in Fiji a year or two ago with Gary Arndt of Everything-Everywhere.com.

Given my Mom had been to Fiji in her youth, the idea of visiting it as well held an added appeal. Combined with the lower costs, I was tempted. Ultimately, I decided to go with Tahiti and French Polynesia because it seemed like fewer backpackers were going there.

But I don't think you can go wrong when it comes to picking island destinations in the South Pacific.

The only mistake you can make when planning a trip around the world is to pass over an entire ocean and not make the effort to touch down at lease once.

Hi Dave. I am planning an eight month trip starting in Central America. I want to make my way down to Peru, Bolivia, Chili, fly to Easter Island and then go to Tahiti from there and on to Fiji. I want to go from there to Australia for just a few weeks and then on to Indonesia, Malaysia, Thailand and on to the fabulous Philippines. The only thing I kind of have concerns about are the cost of plane tickets from Easter Island through to Australia. Is this doable without having to resort to eating grass? I know S.E.A. is cheap because I've been there but I don't know about the rest. Any Advice would be appreciated. thanks.

Hi Mary, sounds like you have an awesome itinerary in mind. I'm not familiar with current airline rates, however I'm happy to recommend http://Airtreks.com which specialize in multi-stop and RTW tickets. I used them to book my first 4 flights back in 2007/2008 and was happy with the rate I got. It turned out to be cheaper to use Air Tahiti to get to New Zealand, with a stop over in French Polynesia, then using Air New Zealand to fly direct!

We almost did the same thing - flying directly to NZ, thinking a stop-over would be expensive. What a huge mistake that would've been! It's pretty unbelievable, really, after saving for months and months to go on an around the world trip and then all of a sudden be on a flight to one of the most exotic places on Earth - Fiji. Don't think you can go wrong with either Tahiti or Fiji, in my opinion.

Agreed, I don't think you can't go wrong with any of the most popular South Pacific island chains.

This is one of the more unexpected blog posts I've read. In considering a RTW trip, the south pacific wasn't anywhere near the top of my list of budget locations, but your post makes me realize I should do a bit more research. You're right- if I'm already "in the neighborhood," I might as well stop by. It's certainly much more economical than a trip there and back from the US. Thanks for the info!

Glad to hear you're going to give the South Pacific some more spot. It's wildly more expensive to make a trip all the way out there juts to visit an island nation than it is to do an extended layover en route from one continent to the next. I wish I gave myself more time in French Polynesia.

I have been to Fiji but not Tahiti and I loved loved loved Fiji! I only had five days there so I stayed on the main island of Viti Levu and took a Fiji Experience bus around the whole island going from resort to resort, I explored the city of Nadi, went sand boarding, cooked some indo-fijian roti, raced hermit crabs, drank copious amounts of kava, visited a school, river rafted, trekked through a rainforest, made jewelery, bbq'd on the beach etc...... LOVED IT I am dying to go to Tahiti next! :)

I have been to Fiji but not Tahiti and I loved loved loved Fiji! I only had five days there so I stayed on the main island of Viti Levu and took a Fiji Experience bus around the whole island going from resort to resort, I explored the city of Nadi, went sand boarding, cooked some indo-fijian roti, raced hermit crabs, drank copious amounts of kava, visited a school, river rafted, trekked through a rainforest, made jewelery, bbq'd on the beach etc...... LOVED IT I am dying to go to Tahiti next! :)

Brooke vs. the World

Wow Cailin, sounds like you did a heck of a lot more with your 5 days in Fiji then I did with mine on Tahiti and Moorea! But in my defense, it was my first stop after quitting my job, and I was absolutely happy to do practically nothing! :)