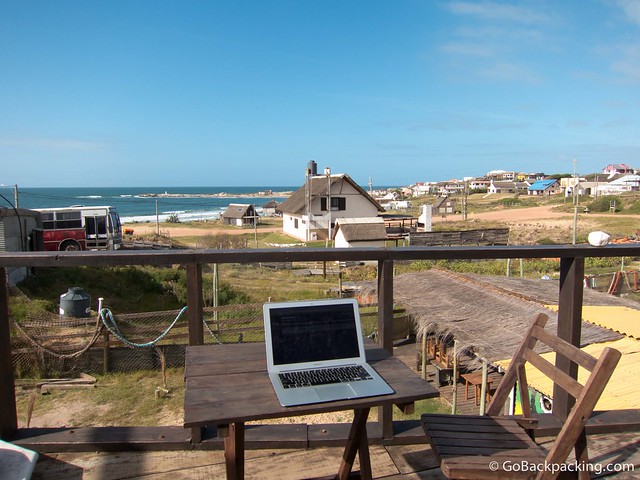 Taking advantage of WiFi, and the view, at a hostel in Punta del Diablo, Uruguay. (photo: David Lee)

[Y]esterday, I went into a well-known coffee shop, eagerly ready to get my daily fix of caffeine for my work day. While impatiently waiting my turn in line, I gazed across the room.

Since the coffee shop was directly downtown, it was no surprise to see backpackers and tourists from around the globe. Some had their Ipads or tablets out; others were sitting on couches or in arm chairs curled up with their computers.

It was then that I started to realize just how small the world had become the last decade and a half, and how this change had affected my life abroad.

I’m not one to tell the young kids how much rougher I had it when I was their age, or how much better life was way back when, and this article won’t be any different. I actually marvel at what technology has done for me as an expat.

When I first began living in Germany, my only lifelines home were my telephone and my laptop. It really doesn’t sound all that bad, and it actually wasn’t.

Of course my computer was running Windows 95 and had a 56k modem hook-up and my telephone was my landline which was extremely expensive to use when calling home. Really the worst and maybe for some the best part of the conditions were the distance.

The purest of travelers will perhaps argue that you can’t truly respect a foreign culture until you completely immerse yourself in it. I agree to an extent, but family and friends are still important parts of our lives and back then communication was severely limited.

Fast forward to today. My once a week phone calls home have been replaced by Skype, Messenger and Face time sessions.

No time for long emails (especially for half-written emails that suddenly disappear when the internet goes out)? No problem. I can tweet a short message and let everyone back home know what I’m doing.

Even better, I can sit down and play Xbox live with my brother when I need to catch up with him. We rock Modern Warfare.

All those nights reading Goethe and Schiller in the beginning you ask?

No more my friends – for I now can comfortably sit at home and watch my favorite TV series and movies every night…and in English no less. Game of Thrones anyone?

Technology is certainly a plus when keeping up with family and friends, and there are certain things to be said about it increasing safety as well.

I’d also be remiss to leave out how Google Maps have helped me on several occasions when finding my way around in unfamiliar territory. Yet, I’m still not so sure about all those other fringe benefits. 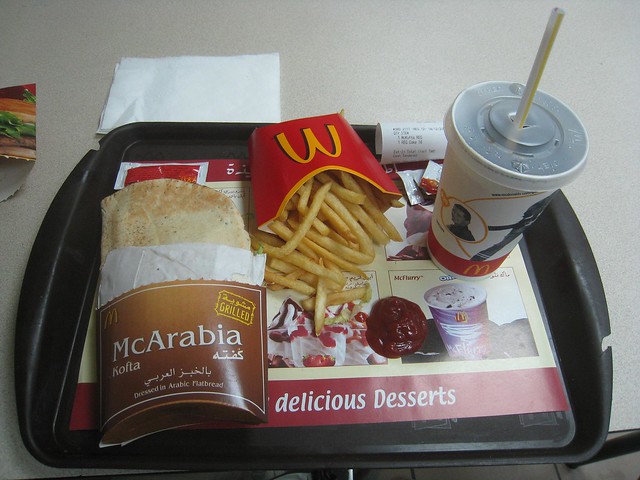 The McArabia meal at at Cairo McDonald's (photo: David Lee)

I think it’s a lot like going into that McDonalds in Cairo – you told yourself you would never go in there, but it sure is tempting [Editor's Note: guilty as charged]. More importantly, it might not even be good-but hey at least you know what you are getting…comfort and certain satisfaction.

So while the world grows smaller, travelers and expats alike are faced with achieving a precarious balance. Some might say we have to balance who we are and what we hope to become.

I for one don’t have the answers; I take the easy way out and simply pose the questions.

But I struggle with the answers too and occasionally find myself wondering things such as – should I really be staying up till 4am to watch the Super Bowl? After 15 years abroad it’s still hard to say no.

Disclosure: This article was written and brought to you by Flights24.com.

I'm curious if the expat David living in Germany might be the David I met in Hamburg around February of this year? My date and I shared a table with him and his girlfriend at a great Turkish restaurant. Just curious if there was any way to get in touch with him or if this is just an interesting coincident? Thanks.

Hey Jeff, I'll refer him to your comment, and if it's him, I can put you two in touch.