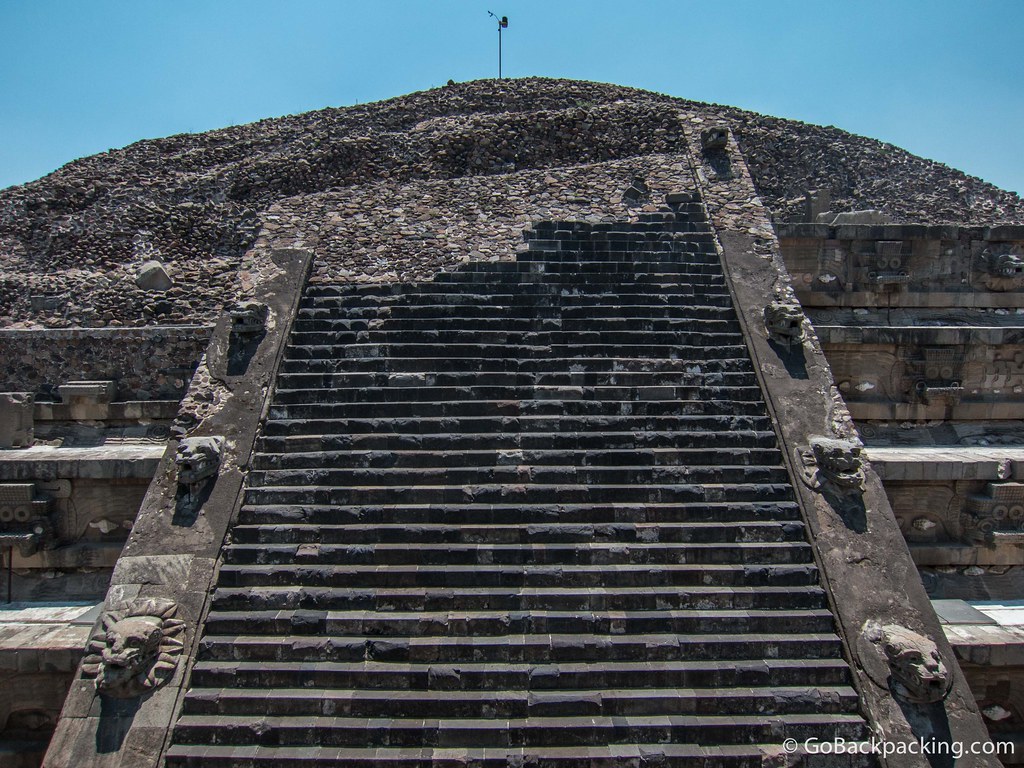 The Temple of Quetzalcoatl (Feathered Serpent).

Dating back 2,000 years, the city was once thought to support 125,000 people, making it one of the largest urban centers in the world at that time.

Despite its grandeur, little is known about the civilization that built the pyramids at Teotihuacan.

By the time the Aztecs discovered the city, it had already been abandoned for hundreds of years.

Today, modern technology including radar and robots are slowly lifting the veil on the mysterious history of a lost civilization. 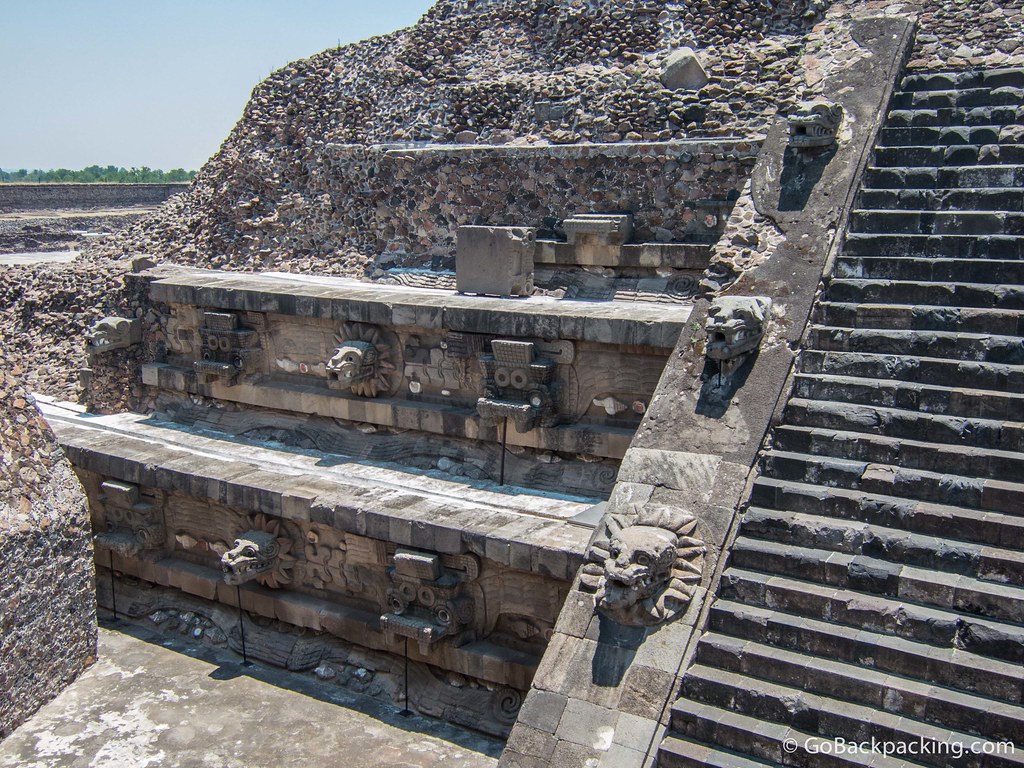 In the late 1980's, a burial pit containing the remains of 200 sacrificed warriors was discovered at the core of the Temple of the Feathered Serpent. As recently as 2011, a robot was used to discover ancient burial chambers, which have been sealed off for as many as 1,800 years. Source 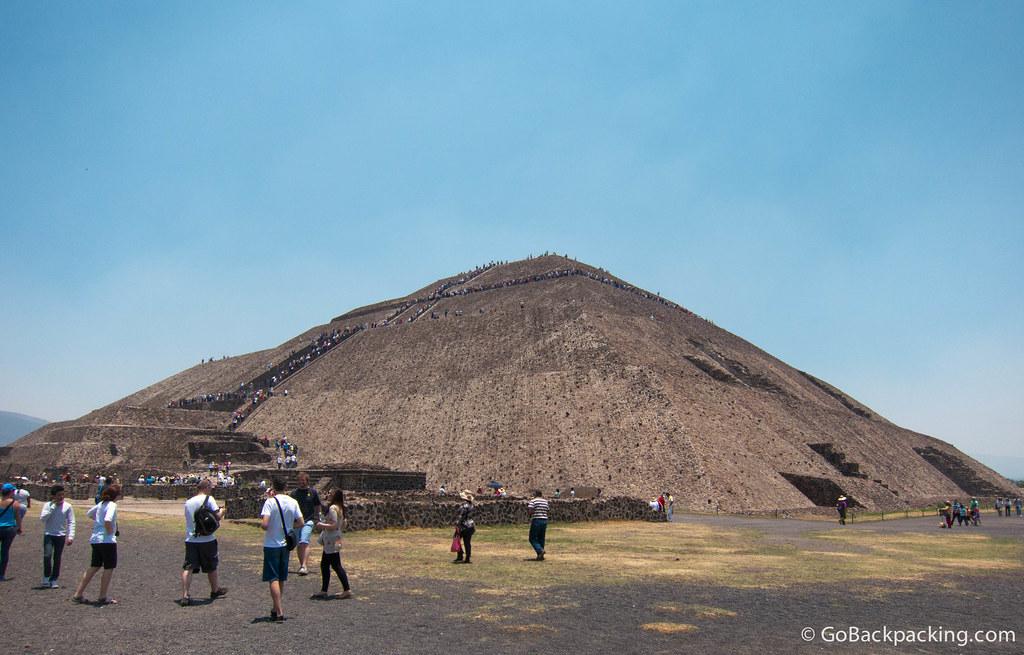 Completed around 200 AD, the Pyramid of the Sun is 63 meters tall, with a base 225 meters long on each of the four sides. It is the largest structure in Teotihuacan, and one of the largest of its kind in the Western Hemisphere. 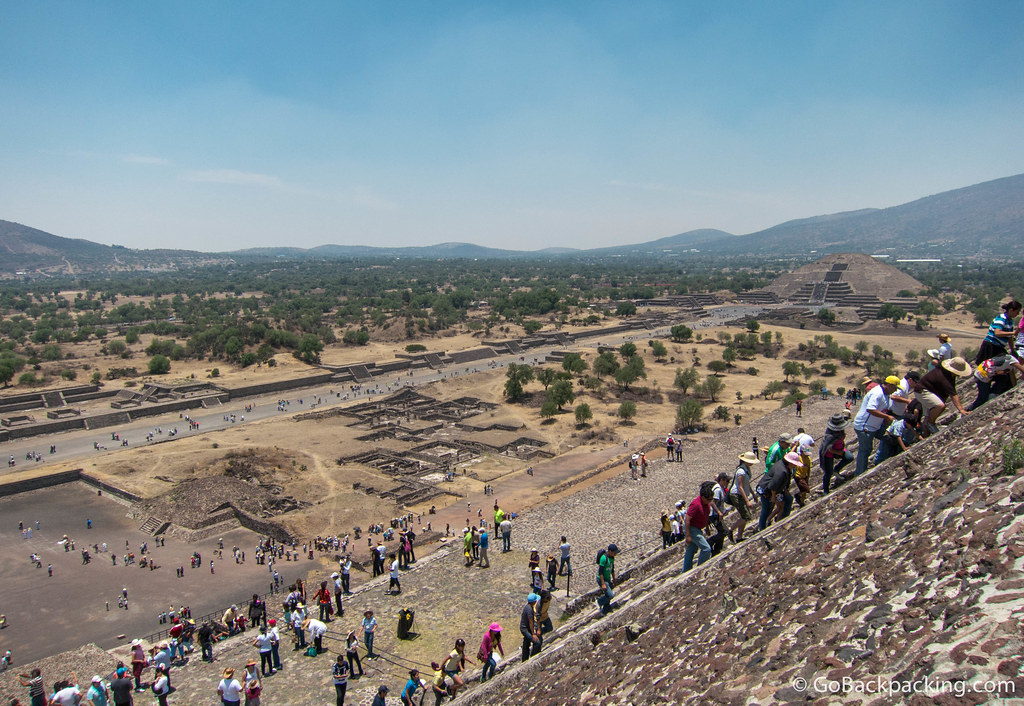 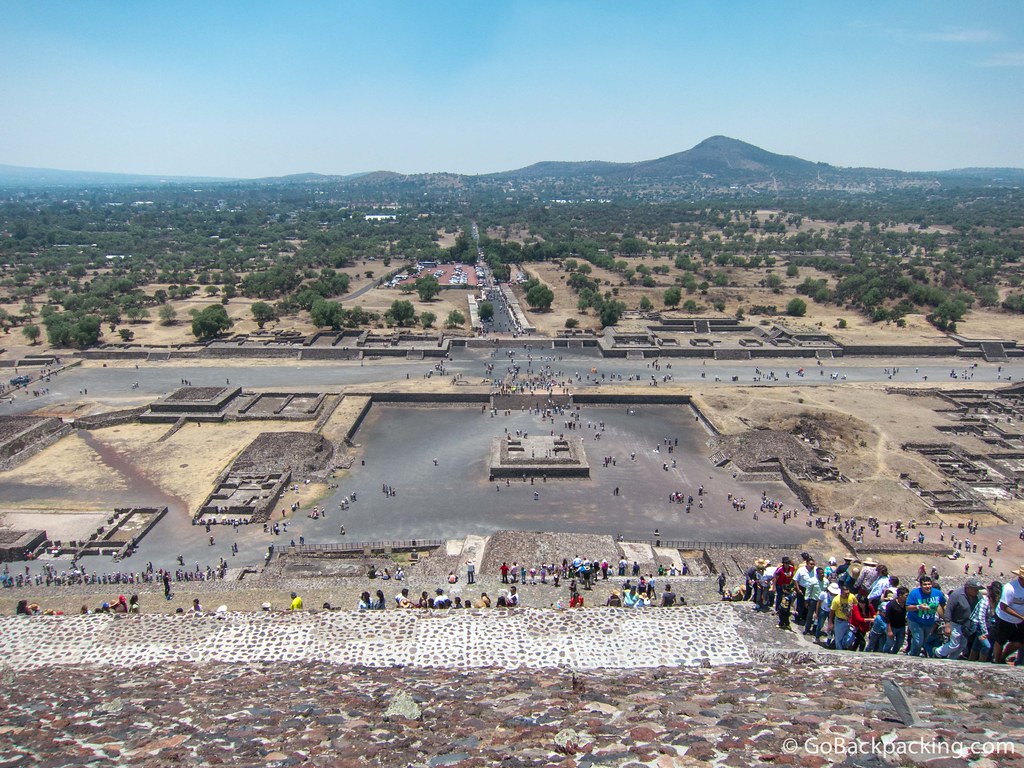 A straight view toward the Avenue of the Dead, which runs the length of Teotihuacan, from atop the Pyramid of the Sun. 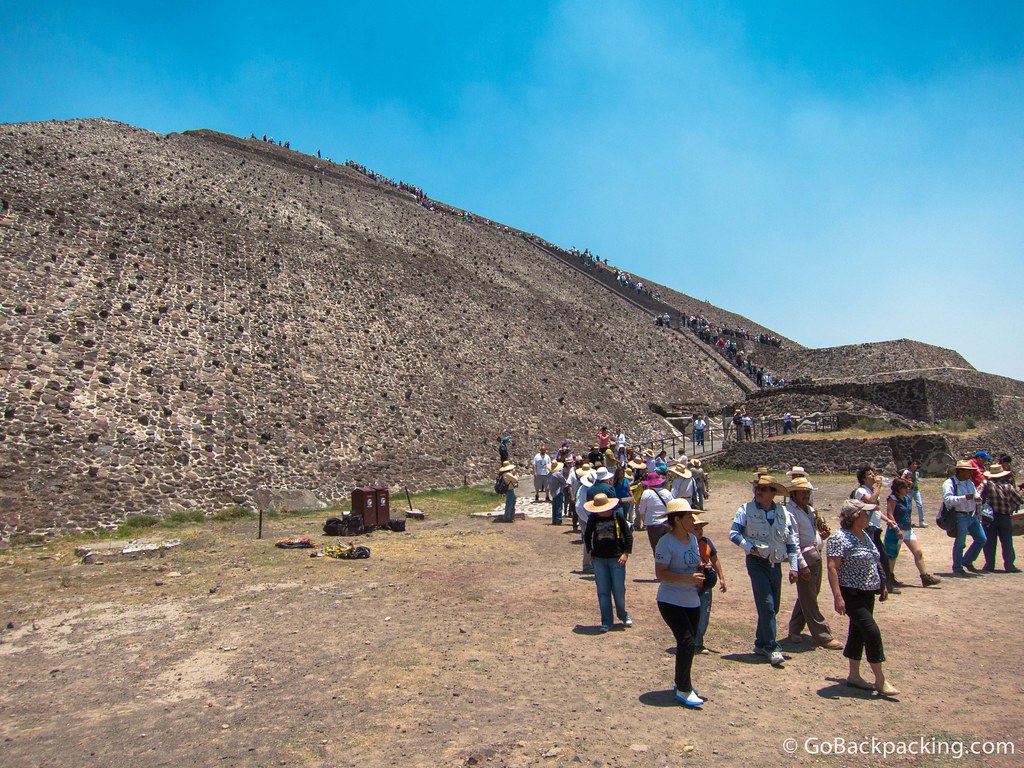 People of all ages were climbing the Pyramid of the Sun, from toddlers to older folks. Like me, I believe most felt a lot more comfortable once they were back down again. 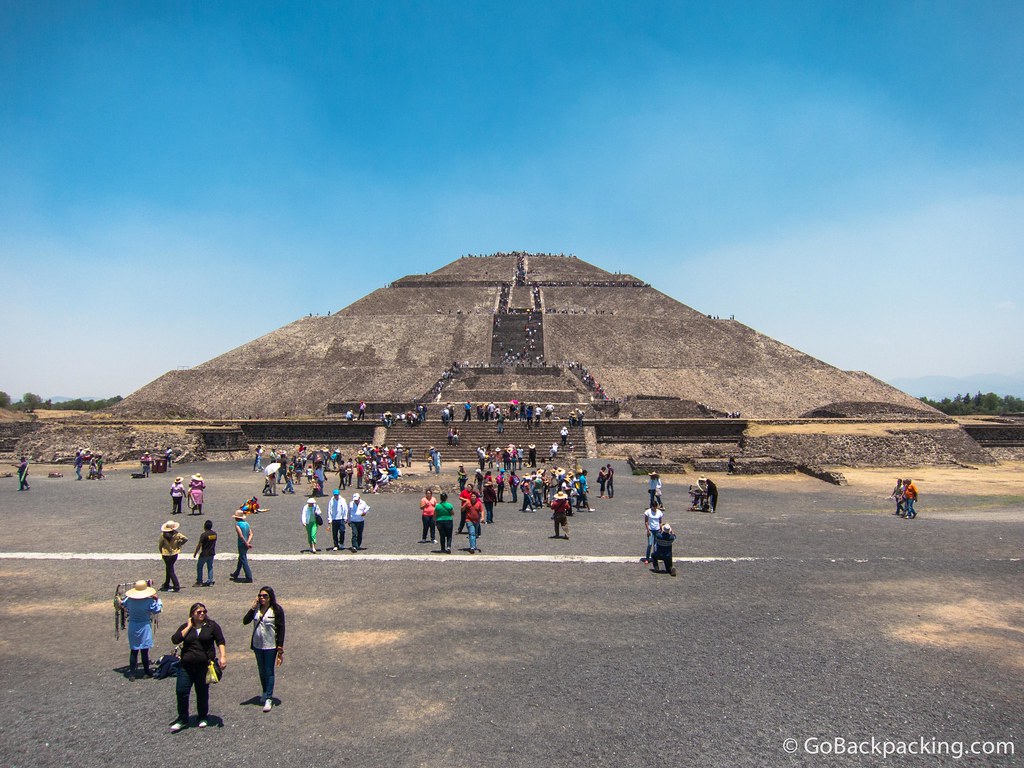 The Pyramid of the Sun as viewed from the Avenue of the Dead. 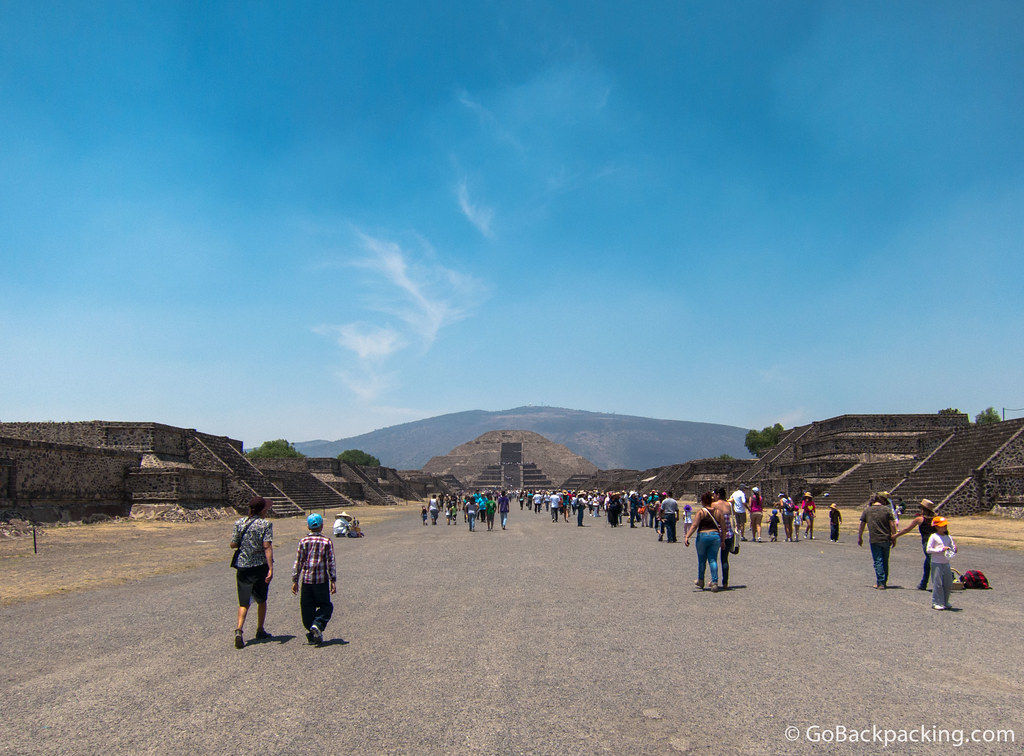 Walking down the Avenue of the Dead, toward the Pyramid of the Moon. This main street through Teotihuacan runs north/south for approximately two miles. 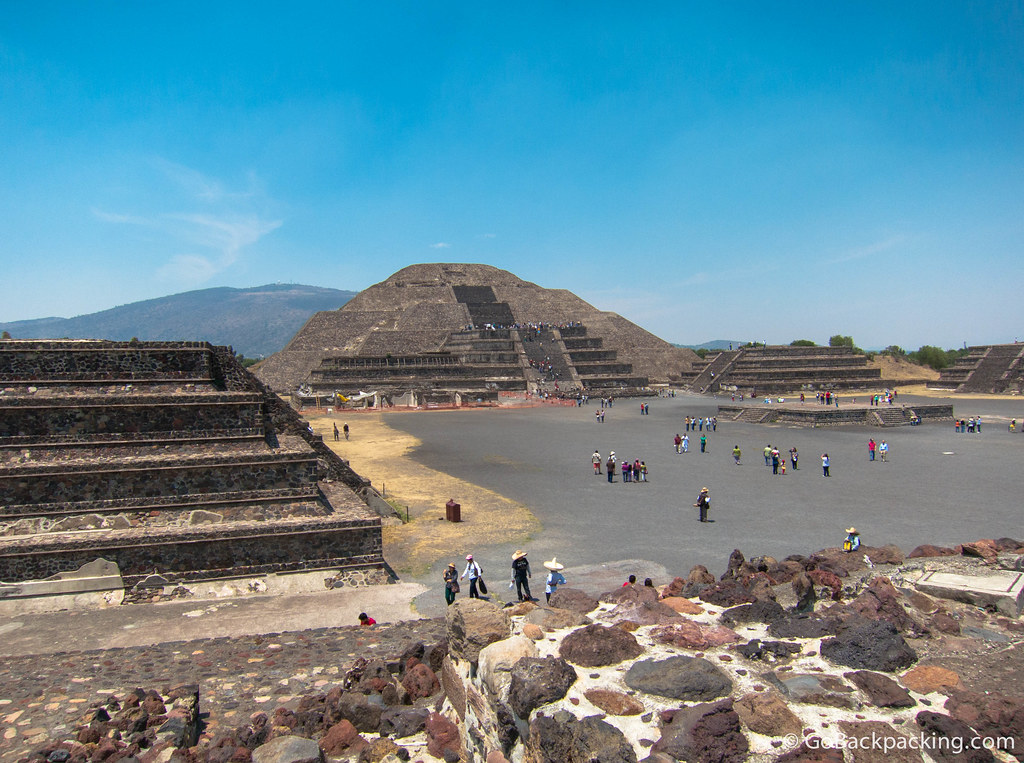 The 46-meter Pyramid of the Moon also contains evidence of human and animal sacrifices. 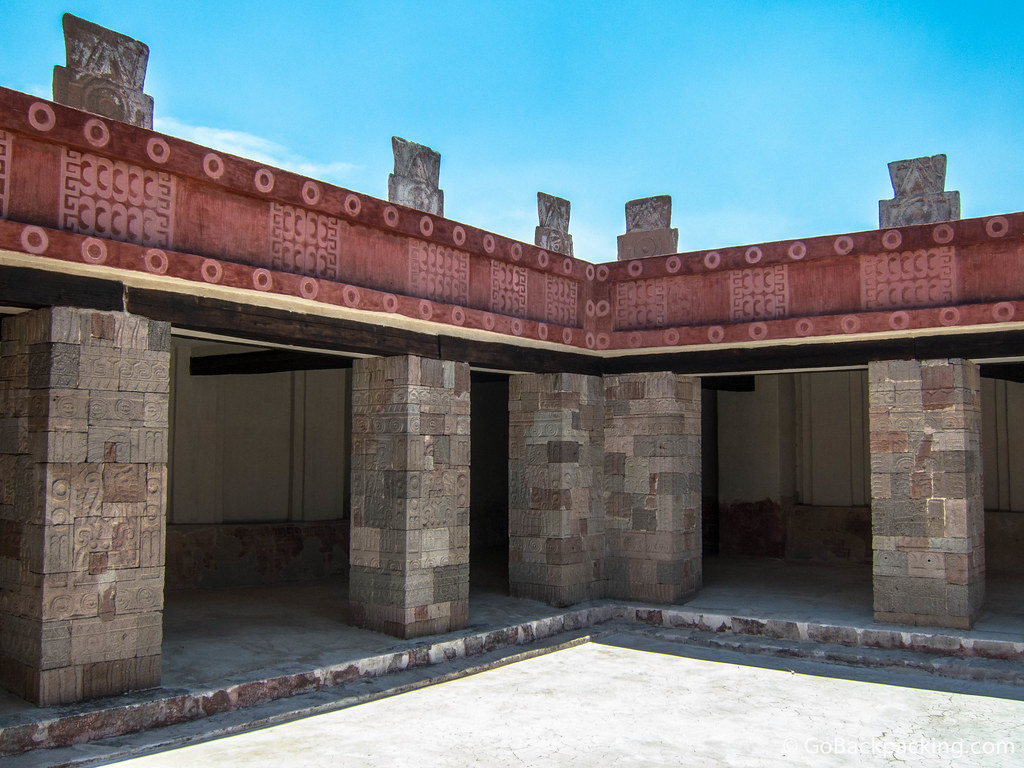 Patio de los Pilares (Patio of Pillars) located in the Quetzalpapalotl Palace, near the Pyramid of the Moon.

The Pre-Hispanic City of Teotihuacan became a World Heritage Site in 1987.

My Mexico Ancient Civilizations tour is in partnership with G Adventures. Any opinions expressed are entirely my own.

Great photos. When I was there it was a Sunday too and the Pyramid of the Sun was packed. Queued for 30min just to get on the steps. Very slowly making our way up. Near the top there was just a big a queue for getting down. We would see the thunder clouds coming but thought we would miss them. We didn't. We were stuck on the top of this pyramid in a huge thunder storm with hundreds of other people. Gale force winds, lightning and pouring rain and we couldn't get off. Everybody in shorts and t-shirts shivering. We could all just huddle and smile at each other at the stupidity.

Wow - what an awe-inspiring monument! Just imagine being one of the poor souls building it in the blazing hot sun...

I feel ya fam

Nice photos. Too bad there weren't less people there though, how did you find the wear & tear of the stone being controlled? I'm still pretty amazed at how well the color is holding up in some of the areas though...such a gorgeous setting!

We went on a Sunday, which we learned is the day of the week that Mexicans get to visit sites like Teotihuacan for free. Thus the crowds.

It seemed well preserved to my untrained eye.

WOW! I hadn't heard of this place. I always think of Tikal first, but wow - this place is incredible!

Tikal is still my favorite, because it's set in the jungle, and so much remains uncovered, it leaves more to the imagination.

But there's something to be said for seeing the entire layout of a city. The cool part is that despite everything you see on the outside, they're still making new discoveries within the pyramids and temples.